Giants' Jones could play if he clears concussion protocol 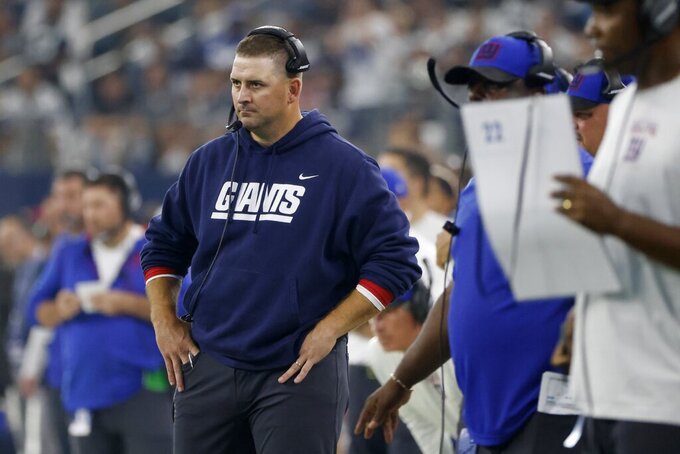 EAST RUTHERFORD, N.J. (AP) — Daniel Jones has made some progress since suffering a concussion last weekend and there's a chance the Giants quarterback will play against the Los Angeles Rams on Sunday.

Coach Joe Judge said Wednesday that Jones remains in the NFL's concussion protocol. It is unlikely he'll practice Thursday since the next step in the protocol would be either increased physical activity followed by a non-contact practice.

That would mean Jones, who threw a little away from the team early in the workout, would have missed most of the preparation for the Rams (4-1).

If that's the case, the likelihood is backup Mike Glennon will start for New York (1-4) in the game at MetLife Stadium.

The Giants did get a little good news on the injury front. Wide receivers Sterling Shepard and Darius Slayton, who missed the last two games with hamstring injuries, practiced on a limited basis Wednesday. Linebacker Cam Brown, who has been on injured reserve with a hamstring, returned to practice.

There was a humorous moment during Judge's news conference when a reporter told the coach Jones was on the field wearing pads. The second-year head man stretched his neck to get a look and had a surprised look on his face.

Jones, who was selected the NFC's Offensive Player of the Week after throwing for 402 yards against the Saints, did not speak to the media. He smiled while walking off the field with coordinator Jason Garrett after practice.

Glennon said last Sunday marked the first time in his nine-year career he has replaced a starter because of an injury. His focus this week is being prepared if he has to play.

Glennon completed 16 of 25 passes in relief for 196 yards and a touchdown. He was also intercepted twice, including a pick-6.

Shepard said he was close to returning last week. He has 18 catches for 223 yards and a touchdown, ranking second on the team in receptions and tied for first in receiving TDs and third in yardage.

Watching the win over New Orleans and the loss to the Cowboys was frustrating.

“It wasn’t any fun missing those two and not being out there with the guys,” Shepard said. “But, back this week and hopefully we can get a W.”

While the Giants missed Shepard and Slayton, it gave rookie first-round pick Kadarius Toney a chance to play more. He was outstanding against the Cowboys, making 10 catches for 189 yards.

“He’s electric with the ball,” Shepard said of Toney. “You get the ball in his hands and he’s going to make something special happen. We’ve got to continue to do that, and everybody else has got to play their part.”

Toney was ejected in the fourth quarter for throwing a punch. The league announces fines and possible suspension later in the week, but expect a fine.

Judge would not say if he planned any further discipline.

“I’ve heard nothing official from the league on anything,” Judge said. “I addressed it earlier. Obviously, there’s discipline inside and I’ll handle discipline in-house.”