Giants QB Daniel Jones cleared to play against the Rams 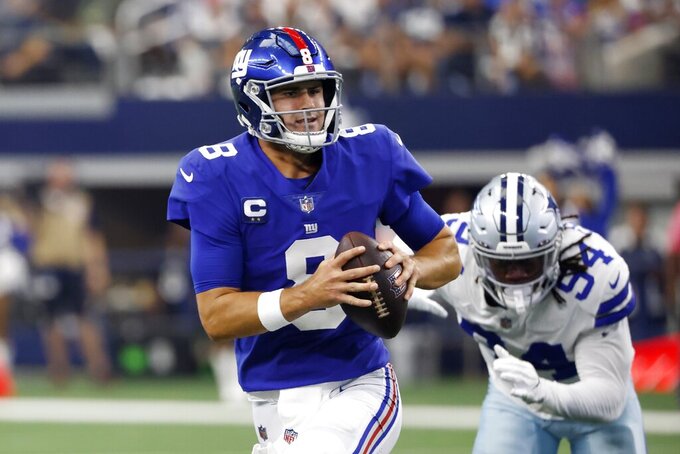 EAST RUTHERFORD, N.J. (AP) — Less than a week after sustaining a scary concussion against the Dallas Cowboys, New York Giants quarterback Daniel Jones has been cleared to play against the Los Angeles Rams on Sunday.

Jones was a full participant in practice on Friday, the next-to-last step in the NFL concussion protocol. He was examined by an independent neurological consultant after the workout and cleared to play in the game at MetLife Stadium.

The Giants (1-4) will not have running back Saquon Barkley and wide receiver Kenny Golladay in the lineup against the Rams. They were hurt in the same game as Jones and were ruled out.

Barkley has a sprained left ankle and Golladay has a knee injury. Neither practiced this week.

Jones increased his workload throughout the practice week, from a non-participant Wednesday to limited work yesterday to a normal load Friday. Jones was not allowed to talk to the media this week because he was in the protocol. He was hurt in a goal-line collision just before halftime.

“Obviously, Daniel is a critical part of this team,” coach Joe Judge said. “He’s done a good job. He’s improved consistently throughout his time here. He’s obviously playing at a high level for us right now. He’s doing a lot of things to facilitate the offense."

Rookie linebacker Justin Hilliard went on injured reserve with an Achilles tendon injury. Hilliard was awarded off waivers to the Giants on Sept. 1, a day after he was waived by the San Francisco 49ers. He played on 15 special teams snaps in the last two games but had no tackles.