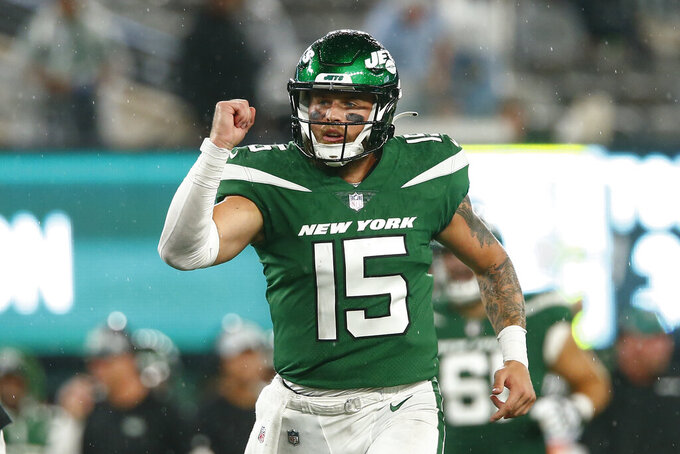 The former CFL quarterback, who led New York to three fourth-quarter comeback victories this summer, was among the team's cuts as it got down to the mandated 53-man roster Tuesday.

“Tough business,” Streveler wrote on Twitter. “So thankful for the opportunities this preseason. This is just another step in the journey. The work and the mindset don’t change!”

When the Jets signed the 27-year-old Streveler shortly before training camp, the move came with little fanfare. He was considered by many merely a “camp arm,” with starter Zach Wilson and backups Joe Flacco and Mike White ahead of him on the depth chart.

“That's what it starts out as and then you just let a guy go and it's up to him to seize the opportunity and make the best of his opportunity,” coach Robert Saleh said. “And it was really cool to see what he did.”

In the preseason opener at Philadelphia, Wilson went down with a knee injury and Flacco wasn't in uniform for that game. So White stepped in — and was later replaced by Streveler, who threw two fourth-quarter TD passes in the win. That came after Streveler had taken no snaps in team drills in camp up to that point.

The former South Dakota star led another late-game comeback against Atlanta, and then threw two more touchdown passes to lead the Jets from behind to beat the Giants in the preseason finale. He finished 24 of 33 for 277 yards with five touchdowns and one interception in three games this summer.

It prompted Saleh to say Streveler “probably had one of the greatest preseasons in the history of football.”

It just wasn't enough for Streveler to make the Jets' initial 53-man roster, even with some fans rooting for him to make the team over White. But Saleh made it clear Streveler — who had three previous NFL stints, including appearing in seven regular-season games with Arizona — would be welcomed back on the practice squad if he clears waivers.

“Strev is awesome,” Saleh said. “I had a great conversation with him. Hoping we get him back. It's overall body of work, too, and he definitely performed — I don't want to take that away from him. But when you look at Mike White from a year ago, OTAs, training camp, he had two rough (preseason) games, but had a really nice game against the Giants.

"Mike just has an overall body of work, really understands what we're trying to get done.”

Meanwhile, Wilson remains sidelined after undergoing arthroscopic surgery to repair a meniscus tear. He also has a bone bruise, and the Jets won't rush him back to the field.

“As soon as he feels he's ready to go,” Saleh said. “There's no timeline. We saw him on the bike, he's walking around, he was out at practice today. He's taking in all the information, he's at walkthroughs, he's in every meeting. So, as soon as he gets cleared by the doctors and he feels good, he'll be out there.”

So there remains a very strong chance Flacco will be under center for the Jets in their regular-season opener at home against Baltimore on Sept. 11.

“If Zach's not ready by Week 1, and we've got a lot to see over the next week,” Saleh said, “then, yeah, Joe will be the starter.”

NOTES: WR Denzel Mims remains on the roster despite requesting a trade last week. Saleh was asked if he thought Mims is being held “hostage” by the Jets for not granting his request to be dealt. “Is he frustrated? Is he frustrated with all of us? Sure, I’m sure he is," Saleh said. “He wants to play and for that, I don’t think he’s a hostage. It’s a lot easier to kick somebody out the door if they want a trade if they’re jerks and that’s not Denzel. He’s a good young man and I love the way he approaches everything, even with this, the way he’s come about it, very professional, comes to meetings, practice, does all of it. So I guess I just don’t view him as a hostage."