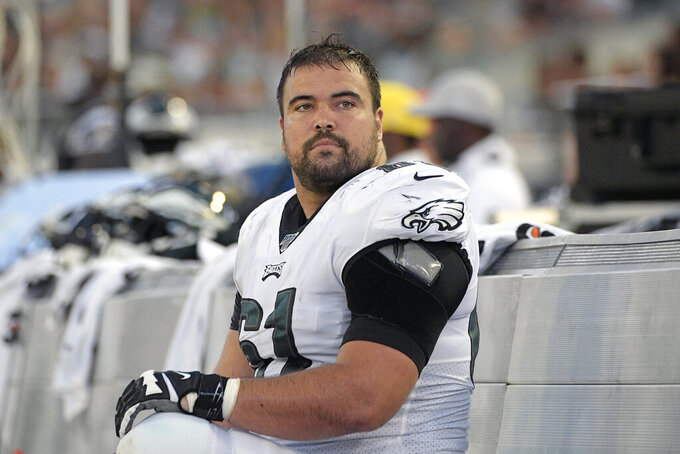 FILE - In this Aug. 15, 2019, file photo, then Philadelphia Eagles offensive guard Stefen Wisniewski (61) watches from the bench during the first half of an NFL preseason football game against the Jacksonville Jaguars, in Jacksonville, Fla. The Pittsburgh Steelers officially signed the well-traveled Wisniewski to a two-year deal on Wednesday, March 25, 2020, bringing the veteran offensive lineman to his hometown. (AP Photo/Phelan M. Ebenhack, File)

PITTSBURGH (AP) — Six months ago, Stefen Wisniewski's Sundays consisted of spending the afternoon watching the NFL on TV wondering if his phone was ever going to ring. The veteran offensive lineman tried not to fixate on the circumstances that led to him sitting on the couch.

“You try not to drive yourself crazy with the why,” Wisniewski said. “I’ve kind of learned to not go crazy, trying to figure out why everything is happening.”

So Wisniewski relied on his faith to get him through, optimistic an opportunity would eventually come. It ended up working better than he ever imagined.

And in February, Wisniewski was on the field earning his second Super Bowl ring in three years while starting for the Kansas City Chiefs. This week his nomadic and recently charmed journey through the NFL finally led him home when the Pittsburgh native signed a two-year deal to join the Steelers.

Though the Chiefs expressed interest in keeping the 31-year-old Wisniewski, the opportunity to play for the team he grew up watching was too good to pass up. He'll be vying for a chance to replace the recently retired Ramon Foster at left guard.

“I knew it’d be an open job and that was exciting,” Wisnewski said Friday. “ It's even more exciting because it’s not just any starting job, it’s a starting job for the Pittsburgh Steelers ... I did have a few other options but it’s hard to turn down your hometown team.”

Wisniewski grew up in the Pittsburgh suburbs and remembers scrambling home from church every Sunday during the fall in time for kickoffs to catch his favorite team. He played at Heinz Field in high school and daydreamed of one day joining his father Leo and uncle Steve in the NFL. Dressing in black-and-gold seemed to be a bridge too far. Both his dad and his uncle spent their entire careers with one team, Leo with the Baltimore Colts, Steve with the Raiders.

Stefen Wisniewski's path has been considerably more winding. He bounced from Oakland to Jacksonville to Philadelphia during his first six seasons, toiling away on clubs that finished with a losing record every year. The streak finally ended in 2017, when he helped anchor an offensive line as the Eagles beat New England in the Super Bowl. Philadelphia, however, declined to pick up his option last spring, making him a free agent.

Weeks passed. Then months. And Wisniewski wondered if he'd ever play again. Then injuries forced the Chiefs to reach out a month into the 2019 season. By December he was starting, then came that remarkable playoff run when Kansas City rallied three times to win the franchise's first Super Bowl in a half-century.

Now the player who worried he'd never reach the postseason has as many rings as new teammate Ben Roethlisberger.

“Yeah, I’ve been really blessed,” said Wisniewski, who added the early struggles made him appreciate how hard it is to get to one Super Bowl, let alone two.

Wisniewski joins one of the league's most experienced lines even with Foster deciding to step away after more than a decade on the job. Center Maurkice Pouncey is entering his 11th season, right guard David DeCastro his ninth, left tackle Alejandro Villanueva his sixth as a starter.

“It’s easy to play next to veterans because they’ve seen it all,” Wisniewski said. “ They're good at communicating and that’s something I do well is communicate and anticipate and I know the Steelers having a veteran line, I know that’s something they’re going to do.”

Wisnewski is doing what he can to stick to a normal routine during this most unusual offseason. The Penn State alum lives full-time in State College, Pennsylvania and typically gets his work in at the school's football facility. That's not an option at the moment with the school shut down due to the COVID-19 pandemic. So he's lifting weights in his basement and lugging his 6-foot-3, 305-pound frame for runs at a nearby park. It's a small concession to make for what potentially awaits in the fall.

“I’ve been a starter most of my career,” Wisniewski said. “It’s my goal and my plan to win that job.”