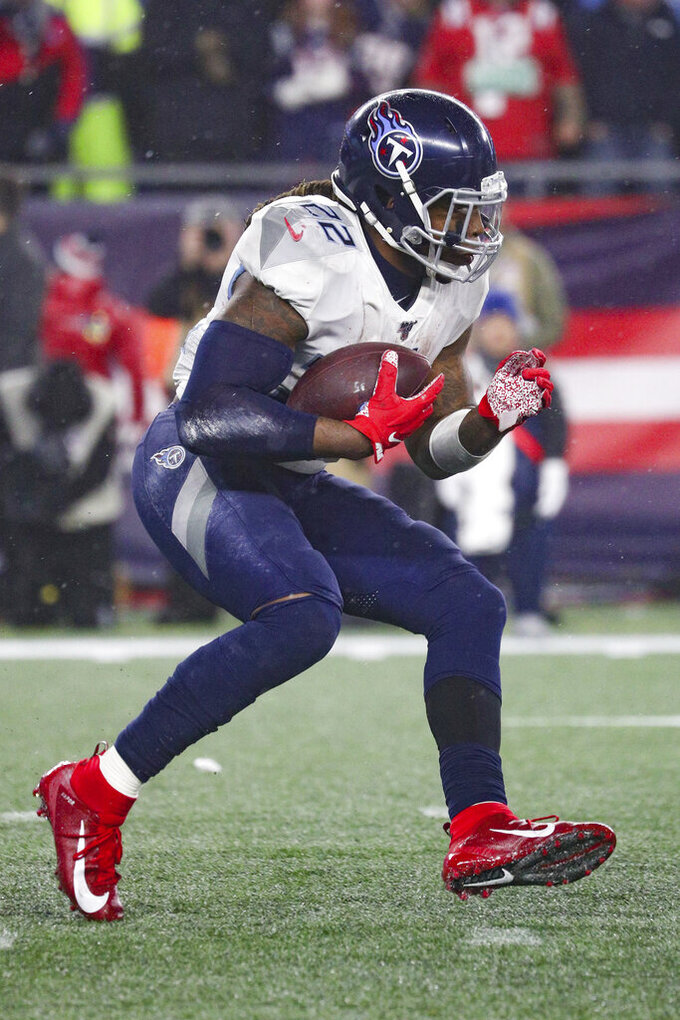 Tennessee Titans running back Derrick Henry (22) finds a hole in the defensive line of the New England Patriots in an NFL wild-card playoff game, Saturday, Jan. 4, 2020 in Foxborough, Mass. The Titans defeated the Patriots 20-13. (Margaret Bowles via AP)

OWINGS MILLS, Md. (AP) — The top prize for individual excellence in college football is the Heisman Trophy. For the first time in the Super Bowl era, five winners of that prestigious keepsake are expected to suit up in the same game, each in pursuit of the NFL's most coveted team award — the Vince Lombardi Trophy.

“Five? I didn't even think about that," said Jackson, who won the 2016 Heisman with Louisville. “It's going to be incredible."

For all he accomplished at Louisville during that amazing season three years ago, Jackson would gladly trade his statue for the opportunity to hoist the trophy in Miami on Feb. 2.

Jackson hopes to receive help from Ingram (Alabama, 2009) and backup quarterback Robert Griffin III (Baylor, 2011). Griffin will start on the bench against the Titans and Ingram is questionable with a calf injury, but earlier this season all three were in the backfield for what was dubbed “ The Heisman Package."

Could we see it again this weekend?

“It could resurface but that's not my decision,” Griffin said. “I know we're focused on beating the Tennessee Titans, and if the Heisman package is part of that, that's what we're going to do."

Griffin chuckled when asked the significance of having Baltimore's Heisman trio being joined at the stadium by Mariota (Oregon, 2014) and Henry (Alabama, 2015).

“I wouldn't say we're getting dressed and going out on the field and saying, 'Oh man, there's five Heisman Trophy winners out there.' But it is a cool aspect of the game," Griffin said. “Maybe we'll get a picture after the game, but I know that's not what we're thinking about right now."

The Titans benched Mariota in mid-October after the offense managed only one touchdown in a 10-quarter span and was coming off a shutout loss in Denver. Since being replaced by Ryan Tannehill, Mariota has been playing the role of the opposing quarterback on the scout team, this week doing his best imitation of Jackson for the Tennessee defense.

Mariota has played in each of the past two games, however, throwing a 24-yard pass to A.J. Brown in the regular-season finale win in Houston and a 4-yard toss to Dion Lewis in last week's playoff win over New England. Mariota will hit the free-agent market in March.

Henry and Ingram both surpassed 1,000 yards rushing this year. The former Crimson Tide stars won't necessarily have to seek each other before Saturday's game because they just recently spoke.

“I talked to Mark the other day, and we were just catching up,” Henry said.

Winning the Heisman Trophy automatically makes the recipient part of a very special club. That's why the modern football world has never before seen five Heisman winners in uniform at the same NFL game.

“There are only so few of us, and every year there's only one more," Griffin said. “So this game, it's something that you'll reflect on later in life and think, 'That was a really cool moment.' But when you're in the moment, it's not as if we're all walking around with HEISMAN on the back of our shirt or carrying our Heisman Trophies."

Like Jackson, Griffin wasn't even aware he was on the brink of sharing in a historic moment.

“If no one told me there were five Heisman Trophy winners in the game, it wouldn't click for me,'' RG3 said. “But yeah, now that people have been saying it, I'm honored to be part of that."