Hurts looks to put up points on Panthers wounded defense 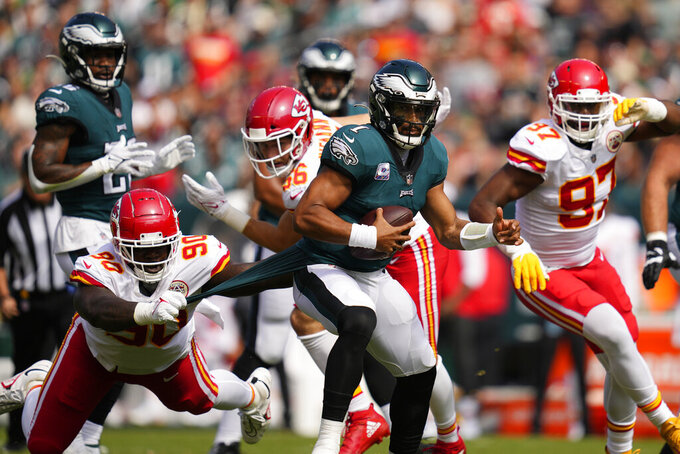 Philadelphia Eagles quarterback Jalen Hurts (1) runs with the ball as Kansas City Chiefs defensive tackle Jarran Reed (90) holds on to part of Hurts' uniform during the first half of an NFL football game Sunday, Oct. 3, 2021, in Philadelphia. (AP Photo/Matt Slocum)

The next thing he needs to do is win some games.

Philadelphia’s second-round pick in 2020 is 2-6 as a starter over the past two seasons despite putting up some solid numbers this year. Hurts accounted for 434 yards on offense and two touchdowns last week against the Kansas City Chiefs, but the Eagles dropped their third straight game 42-30 as Patrick Mahomes shredded the Philadelphia defense.

Philadelphia (1-3) enters Sunday’s game against the Carolina Panthers first in the NFL in yards per carry and Hurts is a big reason why, averaging 6.6 yards per rush.

“Jalen can affect you with his arm, with his ability to escape the pocket and run, and also with designed runs and RPOs (run-pass options), so it's a real challenge for us,” Panthers coach Matt Rhule said. “I had a chance to coach against Jalen in college (while at Baylor) and he's just an excellent player and a tremendous competitor.”

Hurts will face a Carolina defense that's struggling with injuries.

The Panthers (3-1) will be without leading tackler and defensive leader Shaq Thompson on Sunday after the linebacker injured his foot last week against the Dallas Cowboys. With cornerback Jaycee Horn (foot) and safety Juston Burris (groin) going on injured reserve last week, the Panthers will be missing three defensive starters.

Carolina ranked first in the league in most defense categories through the first three weeks of the season, but allowed the Dallas Cowboys to put 36 points and run for 245 yards last week in their first loss of the season.

Hurts said the Eagles offense is “getting close" to where they want to be, but needs to be more disciplined and cut down on penalties.

DARNOLD ON THE RUN

The same franchise which drafted Cam Newton, the career leader in touchdowns rushing by a quarterback, suddenly has a surprise playmaker on the ground in Sam Darnold.

Darnold, acquired from the New York Jets this offseason in a trade, has five TDs rushing — the most of any quarterback in the Super Bowl era through four games. Darnold is on pace to rush for more than 20 touchdowns, which would shatter Newton’s single-season record of 14 set in 2011.

Darnold has four TD runs in the past two weeks.

“I think it’s a product of really good players around me,” Darnold said. “All of these safety and corners and linebackers, they have to commit to stopping all of these guys around me, and that means sometimes the quarterback run just opens up like it has the last few weeks,” Darnold said.

Eagles rookie running back Kenneth Gainwell has been productive, taking carries and receptions away from Miles Sanders. Gainwell had 89 total yards and one touchdown on three carries and six receptions last week. Sanders had 44 yards on 10 combined carries and catches.

Eagles six-time Pro Bowl defensive tackle Fletcher Cox's production is way down: he has just five tackles, no sacks, no tackles for loss, no quarterback hits through four games. He recovered a fumble for a touchdown in the end zone.

"I could be better. I know I can be better,” said Cox, who is in the fifth season of a six-year, $102.6 million contract. “That’s a problem I have to fix. Embrace whatever we’re doing and make the best of it.”

Defensive coordinator Jonathan Gannon blamed his scheme for not putting Cox in better positions to succeed and also pointed out he has contributed in ways that don’t show up on the stat sheet. The Eagles have used both a 3-4 alignment and 4-3 so Cox is still adjusting to a new coordinator.

“It’s just one of them things where it’s hard to get settled in, in a game when you’re playing so many positions and doing so many things,” Gannon said.

Panthers running back Christian McCaffrey's status may not be determined until game time, according to Rhule. McCaffrey missed last week's game with a hamstring injury, but returned to practice this week on a limited basis. Darnold expressed concern this week about McCaffrey rushing back too soon.

“It’s tough for him because he’s such a competitor and he wants to go out there and play,” Darnold said. “At the same time it is early in the season.”

While the Panthers have taken the traditional “one week at a time” approach to the season, the reality is this is a golden opportunity to stack up some wins.

Carolina's next five opponents have 1-3 records and the Panthers are likely to be favored in all of those games. Given the team's brutal closing schedule that includes two games against defending Super Bowl champion Tampa Bay and one against the Buffalo Bills, the Panthers would surely benefit from racking up some wins now.

But if the Panthers don't do a better job of protecting Darnold, they will continue to struggle. Darnold was sacked five times and hit 11 times last week by the Cowboys.