Jackson and Carr have found rhythm in time for Raiders 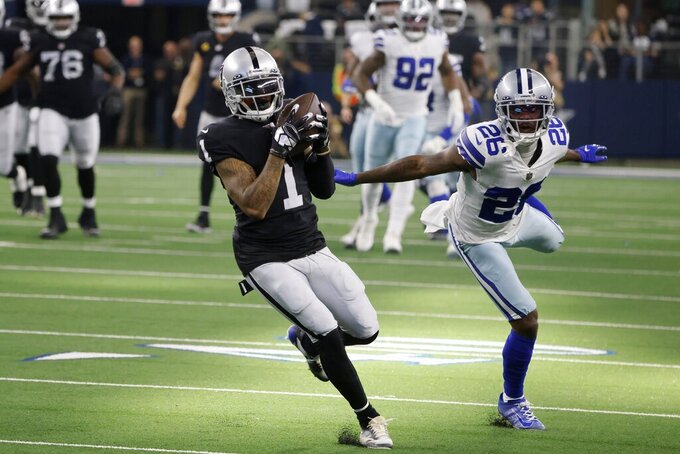 LAS VEGAS (AP) — DeSean Jackson has tormented NFC East teams for years, having played 11 of the first 13 years of his career for the Philadelphia Eagles and Washington.

The 35-year-old wideout, who celebrated a birthday Wednesday, ignited the Raiders' offense on Thanksgiving in a 36-33 win over the Dallas Cowboys to help Las Vegas snap a three-game losing streak. He'll look to carry that momentum into a critical home game Sunday against the Washington Football Team.

The Raiders (6-5) are one game behind the first-place Kansas City Chiefs in the AFC West, tied for second with the Los Angeles Chargers and Denver Broncos.

Jackson, signed Nov. 8 to replace Henry Ruggs III and provide quarterback Derek Carr with a deep-ball threat, has slowly acclimated himself to offensive coordinator Greg Olson’s system and was finally utilized as a major component at Dallas.

“Any time I’m able to get on the field, I’m just looking forward to do some great things for my team,” said Jackson, who caught three passes for 102 yards, including a 54-yard catch-and-run TD against the Cowboys. “Playing in that division, knowing how big them games get and obviously playing for (Washington) and leaving, the way I feel about the teams I leave that I once played for, I always feel like I've got to play extra hard because they had the chance to keep me, and they didn’t.”

Jackson’s 34 career touchdowns of 50 yards or more are two shy of Jerry Rice’s record. He has the most receptions of 20 or more air yards since 2000 with 125, which is 14 more than Julio Jones.

The speedy Jackson also ranks fifth all-time with 136 catches of 25 or more yards.

After being on the field for 25 snaps combined in his first two games with Las Vegas, including a fumble on his lone reception, Jackson played 42 snaps against the Cowboys and certainly brought much more to the team than just his three catches.

With Carr’s usual No. 1 target, tight end Darren Waller, leaving the game and now listed as week-to-week, the quarterback proved he can flourish with other weapons thanks to Jackson opening up the offense for receivers like Hunter Renfrow, Zay Jones and Bryan Edwards, while giving running back Josh Jacobs breathing room out of the backfield.

“His comfort level, being able to play a full game obviously since he’s been here, is much greater now,” Olson said. “We just felt like that game against Dallas was a game where, all right, he’s ready to handle a much bigger role, so let’s get him involved and try to get him involved early. And it worked out well for us.”

Indeed, as Renfrow finished with eight receptions for 134 yards — both season highs — while Jones had five catches for 59 yards, also season bests. Jacobs, meanwhile, rushed for a season-high 87 yards on 22 carries.

“To get him the right amount of plays to get chemistry with Derek, I think it took a little bit of time and hopefully it can get a little bit better each week,” interim coach Rich Bisaccia said.

Sunday, against his former employer, Jackson faces a Washington team he has nine TDs against, tied for the most against all opponents.

And for Carr, who completed 24 of 39 passes for 373 yards and a touchdown without an interception at Dallas, he’s finally on the same page with a bona fide veteran wideout he can feel confident in throwing to after sharing the right look with one another, and a guy who can change the complexion of a game with one big play.

“What we saw in the Dallas game was he was on the field more, he had more opportunities,” Carr said. “That’s him just being able to handle more and be in the system more and being able to play more. I think that him being able to do that obviously gives us that stretch that we are going to need for everyone else to get active, too.”

NOTES: Jackson said he had a spasm in his calf but doesn’t think it’s “too serious.” ... Waller and DE Carl Nassib missed their second straight practice with knee injuries. ... RB Josh Jacobs was limited at practice due to an ankle injury. ... DB Trayvon Mullen was designated to return off injured reserve. ... WR Dillon Stoner and practice squad OL D.J. Fluker were waived. ... S Kavon Frazier was signed to the practice squad.