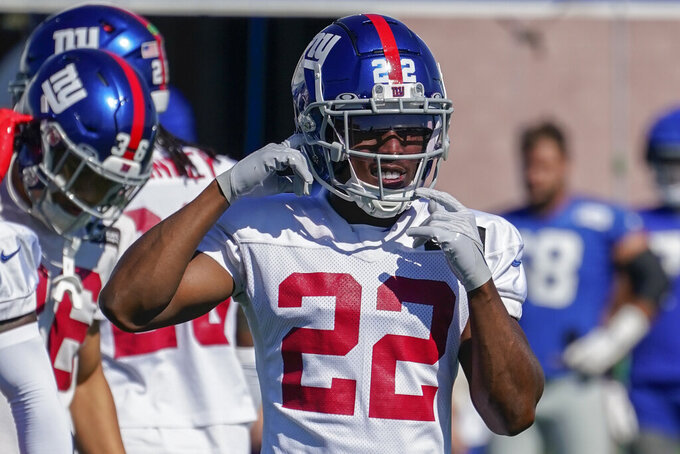 EAST RUTHERFORD, N.J. (AP) — Adoree Jackson has taken over as the New York Giants' No. 1 cornerback since the team's decision to release James Bradberry in May in a salary cap move.

Jackson, who will turn 27 next month, is the old man in the cornerbacks' room. Entering his sixth season and second with the Giants, he's the mentor to young DBs, such as Aaron Robinson and Cor'Dale Flott.

Being an older guy can have its humorous moments.

Jackson was listening to a song by 50 Cent recently and he noticed one of the younger players with a quizzical look on his face.

So he asked the rookie if he knew the artist. He didn't, so Jackson asked him what year he was born.

The response was 2001. Jackson was in the first grade in Illinois, playing video games, wearing his tank tops and wanting to be like 50 Cent.

“So, it was crazy that he didn’t know who that was,” Jackson said. “I think that’s the strangest thing. I mean I came in and they thought I was super young and now that the roles reversed, I’m not old but in the middle, and they are super young like 20, 21. It’s crazy just to see the difference in the age gap.”

With the team in pads for the first time on Monday, Jackson got most of his reps against Kadarius Toney and Kenny Golladay, the Giants top receivers.

“I feel like every year is always an opportunity of a lifetime," Jackson said. “I feel like it’s just the same thing for all of us out there.”

What's different this year is Jackson has replaced Bradberry as the Giants shutdown cornerback. If defensive coordinator Wink Martindale wants one of his cornerbacks to travel with an opponent's top receiver, Jackson will probably get the call and rotate from side to side. Normally, he plays on the right side of the defense.

In the opening week of training camp, Robinson, a second-round pick last year, has been working with the No. 1 defense on the left side.

Flott has also worked on that side, while third-year pro Darnay Holmes has backed up Jackson.

Robinson, who missed the first two months of his rookie season with a core muscle injury, showed flashes last year. He might be even better this year.

“It's me knowing I am going into my second year and with another step ahead, it's time for me to step up for myself and my teammates.”

Jackson likes what he has seen from Robinson, especially his competitiveness.

The other cornerback who has caught his eye is Holmes. The two have known each other since Jackson moved to California after his freshman year in high school. After he enrolled at Southern Cal, he tried to recruit Holmes there. Holmes went to rival UCLA.

Holmes had three interceptions in the first three days of camp, and forced a fumble by Saquon Barkley.

“I’ve seen growth in him as a person and that displays in his game,” Jackson said. “So, I get to see him coming into his own and just doing his thing.”

What Jackson needs to do more in the NFL is making interceptions. He has three in five seasons despite seemingly being near the ball a lot.

“I can’t even explain that. I’m just glad I at least got three. I am fortunate enough to have that,” said Jackson, who had six interceptions in college. “I want to get more but, when opportunities come your way and they present themselves I just have to make the most of them.”

The Giants are hoping they come this year.

NOTES: Giants center Jon Feliciano missed his third straight day of practice because of heat issues on Thursday. Coach Brian Daboll expects him back soon. Safety Dane Belton, the fourth-round pick, had his left arm in a sling and missed practice. He'll be out a little longer. ... The first pads practice was run heavy and Barkley had a couple of impressive runs. ... Daboll isn't running many 7-on-7 drills so quarterbacks can get the feeling of having people around them. ... Fourth-year LB Oshane Ximines had a couple of nice moves in the one-on-one lineman drills. ...PK Graham Gano was in prime form, making 7 of 8 field-goal attempts.