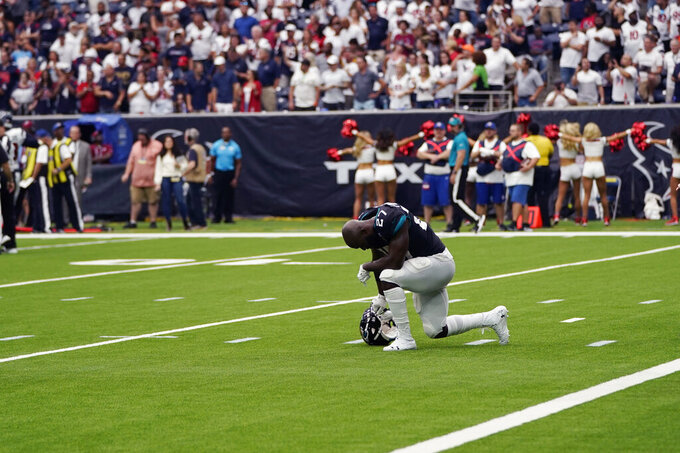 Jacksonville Jaguars running back Leonard Fournette (27) reacts after he was held short of the goal line on a two-point conversion attempt against the Houston Texans during the second half of an NFL football game Sunday, Sept. 15, 2019, in Houston. (AP Photo/David J. Phillip)

HOUSTON (AP) — The Jacksonville Jaguars could have played it safe on Sunday against the Houston Texans and kicked an extra point after scoring a touchdown with seconds left to likely send the game to overtime.

Instead, they went for the win. And, Leonard Fournette's run for the 2-point conversion failed in the 13-12 loss.

Houston (1-1) led by 7 in the fourth quarter when Jacksonville rookie Gardner Minshew led a long drive that included an 18-yard run on fourth-and-10, and he capped it with a 4-yard TD pass to DJ Chark.

Instead of trying to tie it with an extra point, Jaguars coach Doug Marrone opted to go for the potential win by having Fournette attempt to run it in. But the big running back was stopped by Justin Reid. The play was upheld by video review.

"We had a bunch of different plays called (depending on the defense)," Marrone said. "At the end of the day, we were fine with any of them. We came up a couple of inches short and we lost the game."

Fournette believed he got in.

"You seen it," he said. "I tried to jump across and felt like I got over, but they thought otherwise."

Marrone said he decided before the last possession that he would go for two points if the Jaguars (0-2) scored a touchdown.

"I said, 'If we start driving the football and score with a certain amount of time left, I'm going to go for 2,'" he said. "I immediately had the play in mind before the drive even started. I was very, very comfortable with it. It just didn't work."

Minshew, a sixth-round pick, threw for 213 yards and a touchdown for the Jaguars in his first NFL start filling in for Nick Foles, who broke his collarbone last week.

He was disappointed Fournette didn't get in, but believes the Jaguars made the right decision by going for the win.

"We felt really good about the call," Minshew said. "We had the right look. Leonard was close. I thought he got it, but that's how it goes sometimes. I'd bet 10 times out of 10 for him to get in there."

Even Reid wasn't surprised the Jaguars gambled for the win with Fournette.

"Well, Fournette is their guy," Reid said. "If I was their offensive coordinator and I could put the ball in anybody's hands I would have put it in Fournette's hands, too."

Marrone was impressed with the Minshew's performance after being thrust into the starting role despite the loss.

"He doesn't play like a rookie," Marron said. "There are some things that he'll improve on. ... We have to keep working and have to do a better job of coaching it and a better job performing it. On that last drive, you could see the poise that the kid has. He was able to go down the field and score. He's not a guy that gets rattled, he understands what we're trying to get accomplished, and I couldn't be happier with him."

The last play wrapped up an interesting game that included a heated exchange between Marrone and star cornerback Jalen Ramsey. The Texans led 3-0 after a field goal with about two minutes left in the first quarter. Ramsey was apparently upset that Marrone didn't challenge a catch by DeAndre Hopkins on third-and-2 earlier in that drive and the two were seen yelling at each other on the sideline after that drive.

Marrone was asked about the exchange and didn't provide many details.

Ramsey refused to talk to reporters after the game.