Jets know they need to cover offense vs. Dolphins' Cover 0 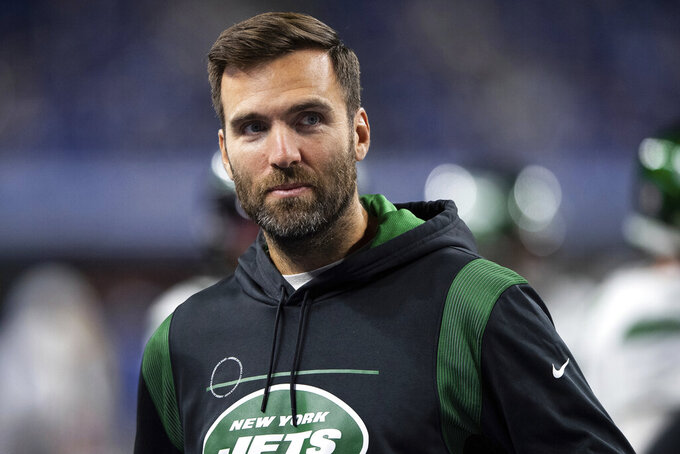 FILE - New York Jets quarterback Joe Flacco (19) walks on the field before an NFL football game against the Indianapolis Colts, Thursday, Nov. 4, 2021, in Indianapolis. Flacco will start at quarterback for the New York Jets on Sunday at home against the Miami Dolphins. Coach Robert Saleh made the surprising announcement Wednesday, Nov. 17, as the team decided to go with the 36-year-old veteran over Mike White, who started the last three games in place of the injured Zach Wilson. (AP Photo/Zach Bolinger, File)

EAST RUTHERFORD, N.J. (AP) — The New York Jets watched film of Miami's defense and it was easy to see why the Dolphins are giving teams fits.

Their defense is aggressive and brings the pressure up front by frequently using a Cover Zero scheme — a blitz-filled pass rush that shuts down the short game and dares offenses to try to beat them deep.

“They know that you know it's coming,” Jets offensive coordinator Mike LaFleur said.

It worked to perfection against Lamar Jackson and the Baltimore Ravens in a stunning 22-10 win last week. The Dolphins (3-7) used it to stifle Houston in a 17-9 victory over the Texans two weeks ago. It also gave Buffalo fits three weeks ago, when the Bills were held to three points in the first half before winning 26-11.

It was a big reason for the Jets' switch at quarterback to Joe Flacco on Sunday at MetLife Stadium over the inexperienced Mike White who had been under center the past three games with Zach Wilson out with a sprained knee ligament.

“Joe has got the ability to process and get the ball in and out of his hands as quickly as possible,” Jets coach Robert Saleh said. “I have a lot of faith in Mike LaFleur and his ability to game-plan with his staff and put players in position where there’s space to be had.

"But it goes back to Joe’s experience and recognizing coverages pre-snap and knowing exactly where the ball needs to get as quickly as possible to, one, avoid hits, but, two, get the ball where it needs to go in space.”

The Jets (2-7) better hope Flacco learned from his start against them last season, when the Dolphins swarmed him in Miami's 24-0 win. He was 21 of 44 for 186 yards and an interception, and was sacked three times.

“They’re not afraid to go put everybody at the line of scrimmage and leave what I’m sure they feel like is the strength of their defense, their secondary, out on islands,” Flacco said, “and know that they’re going to get some pressure on the quarterbacks and the guy’s going to have to get the ball out of his hands quickly.

"So, it limits your offense to a certain extent.”

Miami’s Tua Tagovailoa will become the sixth quarterback to start for the Dolphins in a game where Miami faces Flacco.

The 36-year-old Flacco is 7-1 against Miami, the loss coming last season. His offenses scored at least 26 points in all seven of the other meetings, obviously all wins.

The Dolphins and Jets have played their share of memorable games over the years: the AFC championship game in 1983 won by Miami, New York's 51-45 overtime win in 1986, Dan Marino's fake spike in 1994 and the Monday Night Miracle in 2000 when the Jets stormed back from a 30-7 fourth-quarter deficit to win in OT.

And fittingly, the all-time series between the AFC East rivals is squared up at 55-55-1.

Brian Flores knows fans always love a renewal of the Jets-Dolphins rivalry, but forgive the Miami coach if he doesn’t add any extra significance to the matchup.

To him, it’s simple: The other team is always the rival, every week.

“For fans, yeah, that exists,” Flores said. “For us and our team, I think there’s not more energy put into this game than every other game. There’s not more buildup, excitement or preparation for what some may consider a rivalry game.”

The Jets are the first team since the 1966 Giants to give up at least 45 points three times in a four-game span. They're embarrassed by their performance, but opponents are still showing them respect.

“You say struggling, I don’t know if I see that," Dolphins offensive lineman Robert Hunt said. "I see a big, talented, fast, physical team on the defensive side of the ball. The front seven is really good, in my opinion. Everybody has their issues, I would say, but I think it’s going to be a good game. I think that team is very talented.”

“There isn’t a magic formula or a secret sauce or anything like that,” defensive tackle Sheldon Rankins said. “We all just have to get better and collectively be able to execute on Sundays when it matters.”