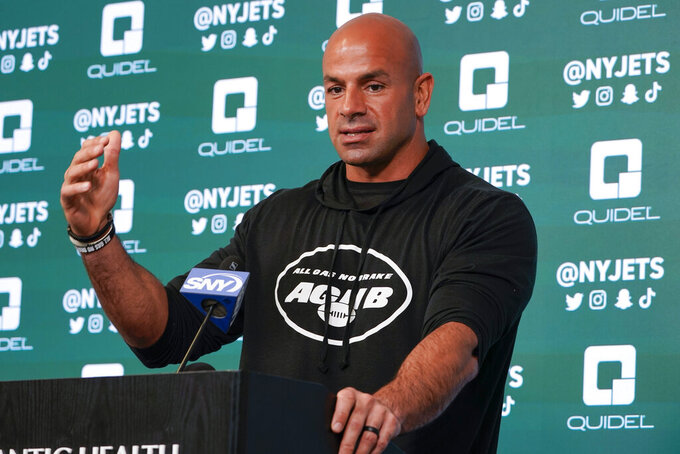 They were downright ugly and embarrassing.

But a year after being ranked last in nearly every key defensive category, the Jets are optimistic they will not only bounce back in a big way but be really good. Especially in their revamped secondary.

"I think we’ve got the guys to do more than just get the job done," cornerback D.J. Reed said Wednesday. "I think we can dominate.”

That's a bold statement, especially considering how much the secondary struggled at times last season. But it's a sentiment shared by safety Jordan Whitehead — who like Reed is a newcomer to the Jets and being counted on to help turn things around in a hurry in the back end of the defense.

“I think this can be one of the best secondaries I’ve been a part of in five years,” Whitehead said. "These guys are hungry.”

That includes first-round pick Ahmad “Sauce” Gardner, the No. 4 overall selection out of Cincinnati who could be in line to be a Week 1 starter opposite Reed.

Bryce Hall and rookie Brandin Echols were the starters on the outside at cornerback last season and showed promise, but also had some shaky moments facing opponents' best receivers on a weekly basis. While Reed will step into a starting role after signing a three-year, $33 million deal in March, Saleh isn't handing the job to Gardner — despite the expectations the rookie will make an immediate impact.

“I’m not trying to stir up headlines, it probably will, but he still has to go earn it,” Saleh said. “Bryce has started, he’s taking the (first-team) reps and it’s not for show. You have to earn your right to play football. Just because you were drafted in a certain spot, it doesn’t mean anything.”

Just ask Reed, who was a fifth-round pick by San Francisco in 2018 out of Kansas State. After two years with the 49ers — where Saleh was his defensive coordinator — he was waived and picked up by Seattle. Reed developed into a solid player with the Seahawks and was a starter most of last season, ranking among the NFL's best at the position.

“He's overcome a lot to be where he’s at today and he will only get better,” defensive coordinator Jeff Ulbrich said. “I don’t think this league has seen what he can become.”

Whitehead will team with veteran Lamarcus Joyner at the two safety spots, which was a revolving door last season after Joyner was lost for the year with a triceps injury in the opener and Marcus Maye tore his Achilles tendon in Week 9.

Maye signed with New Orleans in March and the Jets replaced him with Whitehead, who signed a two-year, $14.5 million deal in March after spending his first four NFL seasons in Tampa Bay. He was impressed by what he saw from the Jets last season when they gave Tom Brady & Co. a tough time before the Buccaneers rallied to win 28-24 in Week 17.

When he became a free agent, he remembered that game — and the vibe from the Jets despite New York's 4-13 season.

“These guys, the record, whatever the record was, it doesn’t matter — they came out and played hard,” Whitehead said. “So we have a fresh start, new players, a new group of guys, new knowledge and everything. We could be very special.”

The Jets made improvements up front, too, drafting defensive end Jermaine Johnson in the first round and Micheal Clemons in the fourth. Carl Lawson is expected back after he missed all last season with a ruptured left Achilles tendon. Jacob Martin was also signed in free agency. Vinny Curry was also re-signed after he sat out last season after developing blood clots following surgery to have his spleen removed. All five have a knack for getting to the quarterback and should increase New York's sacks total from 33, which ranked among the NFL's lowest last season.

Ulbrich and Saleh also expect to continue to use a rotation among their interior D-linemen, namely Quinnen Williams, John Franklin-Myers, Solomon Thomas, Sheldon Rankins and Nathan Shepherd, to keep them fresh.

“This style in which we play, this attack front, it’s best when you’re playing 30-35 snaps a game,” Ulbrich said. "We didn’t have that luxury last year because of the depth that we didn’t have, so the fact we have some more depth now, you can get back to really the essence of this front.

“Let these guys just absolutely rip it, jump off the ball, run all day long and then when they get tired, boom, you’ve got another guy to go in for him.”

“That’s the secret to good defense,” Ulbrich said. “When we play complementary football — rush and coverage — when they work together, that’s when you play really competitive, tough, stingy defense. We’re working toward that. We have a lot of work to do.”