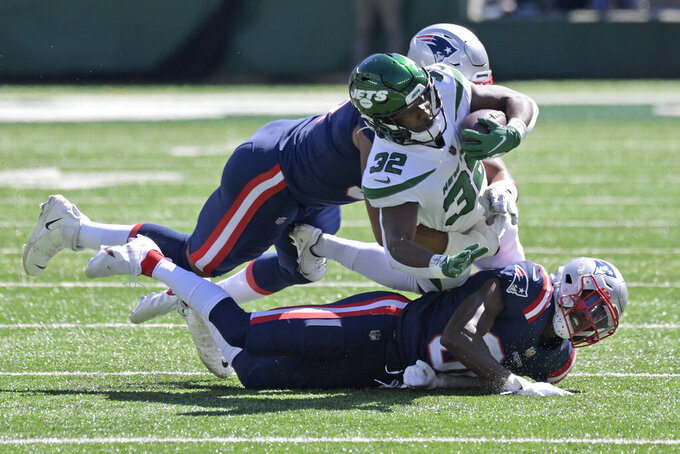 FLORHAM PARK, N.J. (AP) — Michael Carter stands out on the football field — and it’s not just because of his elusive moves.

The New York Jets rookie running back is always bouncing around with a child-like exuberance that rubs off on his teammates.

“I do love the juice and the energy he brings to practice,” coach Robert Saleh said. “He’s got this big smile on his face, he’s got a lot of energy to him, and it’s important to him.”

It's just who the fourth-round pick out of North Carolina is. The 22-year-old Carter loves football, and it shows.

“That’s not something I really think about,” Carter said of his personality on and off the field. "I think it’s just I enjoy playing the game. Like, it’s my job, you know? (But) I don’t have to dress up and wear a collared shirt every day. I can go put a dri-fit (athletic shirt) on and go to work.

“There's nothing wrong with collared shirts, though. I think they’re great.”

But Carter's office is the football field. And he's anything but buttoned up there.

After a low-key NFL debut during which he had 6 yards on four carries and a 14-yard catch at Carolina, Carter ran for 59 yards on 11 attempts and caught two passes for 29 yards in New York's loss to New England.

“His contact balance — he’s shown, somehow, someway, guys just fall off him," Saleh said. “So he’s got a great running style to him.”

The offense, particularly quarterback Zach Wilson, struggled against the Patriots, but Carter provided some flashes of optimism.

“He was electric,” Saleh said.

Carter grew up in Navarre, Florida, following — or running — in a few family footsteps. His father, Tony, played running back at South Carolina State and his oldest brother, Dwayne, played in the backfield at Independence Community College and Harding University. Carter's younger brother, Joshua, is a running back at South Alabama.

They've all learned to run hard. Always. Never settle for being stopped if you can get another yard.

“I think my dad, I'll give him credit for that,” Carter said. "When I was young, I was always watching the greats and they never got tackled by the first (defender), so that was kind of like being the standard for my house growing up.

“I grew up with a whole bunch of running backs, and you used to get made fun of if you were tackled by the first person. So it's kind of in me.”

Carter watched as much film of he could of successful NFL running backs, from Walter Payton and Emmitt Smith to Jamaal Charles and LaDainian Tomlinson.

“I can name probably like 100 running backs,” Carter said.

But Carter is hesitant to say he has modeled his game after any one of them.

“I feel like for me, it's about creating my own style and just picking parts of their game,” he said. “Even today's running backs, I watch film all the time of some of the best running backs in the league right now because that's the pinnacle I'm working toward every day.”

That journey began on the Little League fields of Florida, and then Navarre High School, where he was the state's offensive player of the year with 3,345 all-purpose yards and 45 touchdowns as a senior. He scored seven of them in one game against American Heritage, rushing for 331 yards.

So, who was the best high school player in the family?

“I’d probably say me,” a grinning Carter said. “But that’s only because the numbers don’t lie.”

He was highly recruited and chose North Carolina, where his 3,403 career yards rushing are fourth on the school's list. Carter was an all-purpose star for the Tar Heels, teaming with Javonte Williams — who he'll face Sunday at Denver — in the backfield, also providing a game-breaking presence on special teams.

The Jets had their eye on Carter — not to be confused with defensive back Michael Carter II, who was selected in the fifth round out of Duke — early in the draft in April. Projected as a late-second or third-round pick, Carter slid a little bit and New York couldn't believe its luck when it went on the clock for the fourth round and the running back was still there.

Carter has been packaged in the Jets' backfield with Tevin Coleman, Ty Johnson, La'Mical Perine and Josh Adams. But performances such as the one he had last Sunday could push the rookie to the front of the pack — and soon.

“We couldn’t be happier having him, a fourth-round draft pick that we thought would be gone by the third round,” Saleh said. “So he's everything we expected.”

But Carter is expecting to be much more.

“I left a lot out there," he said. “I think the difference between good and great is so small, and I feel like it doesn't mean anything if you can't do it again.”