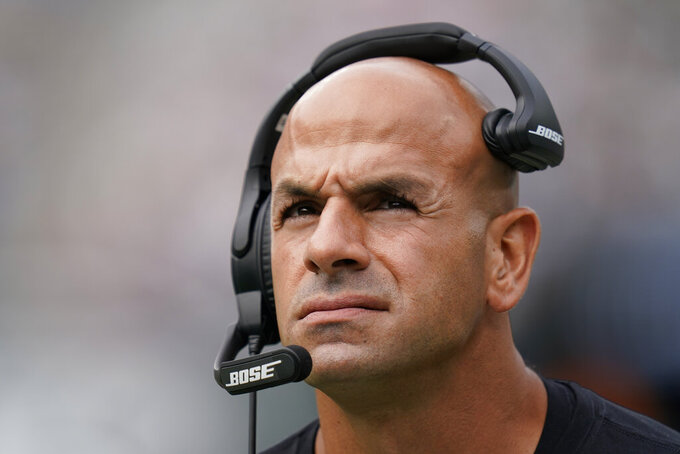 NEW YORK (AP) — Robert Saleh spent the past week huddling with his New York Jets coaching staff, eager to figure out how to solve the issues that have contributed to a 1-4 start.

The coach is optimistic his team — players and coaches — will show improvement as it comes out of its bye-week break.

“We feel good about the soundness of the decisions that we’re going to make moving forward,” Saleh said Monday. “And it’s not just a grab bag to try to throw junk at the wall and hope that it sticks.”

The Jets have plenty to fix, reflective of a young and inexperienced roster and coaching staff. But a major focus of the brainstorming sessions last week was the offense with rookie quarterback Zach Wilson, and the team's head-shaking trend of terribly slow starts under first-year offensive coordinator Mike LaFleur.

New York has scored zero points in the first quarter this season, compiling just 79 total yards. Through two quarters, the Jets have just 13 points and 420 yards, compared to 75 points and 1,031 yards for opponents.

Wilson has struggled, throwing four touchdown passes and a league-leading nine interceptions. He said last week he wants to be “less robotic” on short-yardage plays. There have been flashes of the type of playmaking ability that made him the No. 2 overall pick, mixed with the mistakes of a rookie learning life in the NFL.

Like several players, Wilson went home for a few days over the break to get away from football for a bit — although the quarterback still worked on his game. Saleh spoke to his young QB late in the week and said the two “had a good talk,” although the coach also had to issue a reminder.

“I was like, 'Hey, dude, just make sure you go to sleep. Just relax, just lay off a little bit and just relax,’” Saleh said. "He’s such a competitor, he’s just constantly thinking about it.

“But I do think coaches, players, the organization — even for you guys — to step away and watch somebody else for a minute, it’s a good refresher and a chance to come back and see if we can finish this thing strong.”

Saleh declined to detail the game plan he and the coaches came up with to change the team's fortunes, saying he wanted to keep that private. He did indicate there have been tweaks off the field to the in-week schedules.

“Yeah, it’s subtle,” he told reporters. “You guys won’t even notice it. It’s just subtle in terms of timing and all that stuff. Just trying to get the body clocks moving at an earlier time, as it pertains to the week.”

One criticism of the Jets by some fans and media has been the lack of an established identity, particularly on offense. When LaFleur got to New York, it was assumed the Shanahan-style scheme would follow from San Francisco. Instead, there has been no consistency with the Jets' approach because of poor execution and subpar play calling at times.

Saleh did reiterate that he and his staff “stand in lock step” general manager Joe Douglas in building the team from the front lines. The defensive line has been a strength through five games, while the O-line had a tough start but has bounced back in recent weeks.

The O-line’s pass protection has been noticeably better since the first three games, when Wilson was sacked a total of 15 times. He has been sacked just three times in the two games since. The running game, however, has stalled, with New York’s 3.6 yards per carry better only than Houston and Las Vegas, both averaging a league-low 3.3 yards.

“I think it’s starting to get established,” Saleh said of the team's identity. “I know it’s hard to see right now, but I think in the trenches, I feel like we’ve been the better team, with the exception of those first couple of weeks. But it’s been coming along, and I think our guys are starting to understand where we’re going to make hay and where we’re going to win football games.”

NOTES: LB Jarrad Davis and S Marcus Maye, both sidelined by ankle injuries, are progressing. Saleh said “it's looking promising” for both to be ready to play Sunday at New England. ... LT Mekhi Becton is still “a few weeks away yet” from returning from a knee injury that landed him on injured reserve after Week 1, Saleh said. “He’s been working hard,” Saleh said of Becton. “He’s in pretty good shape and I know he’s chomping at the bit to get back.”