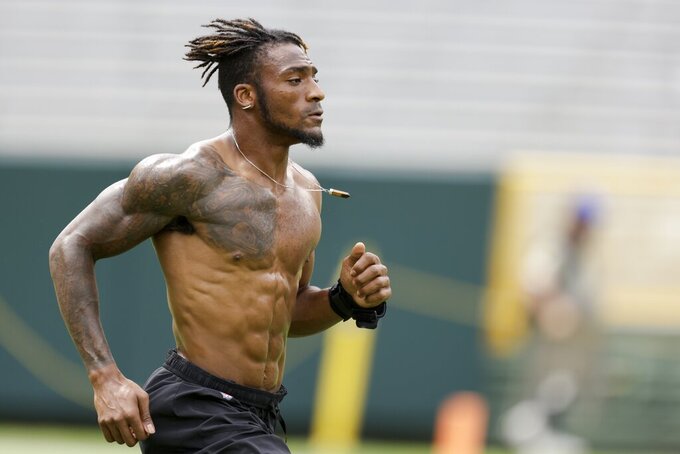 The 25-year-old Austin was entering his third season with the Jets, and was expected to start opposite Bryce Hall, who's in his second year.

With Austin gone, second-year cornerback Javelin Guidry and rookies Brandin Echols, Jason Pinnock and Isaiah Dunn are in the mix to earn the starting job.

“I'm very appreciative toward Bless,” coach Robert Saleh said. “He's a good young man. With the youth that we have at corner and the competition they've been able to provide and the growth they've all been able to have since OTAs and training camp, we're going to give those guys a run and give them an opportunity to compete over this last week and a half and roll with those guys."

In other moves, the Jets re-signed tight ends Ryan Griffin and Dan Brown, and safety Sharrod Neasman — all of whom were among the team's initial cuts Tuesday. Defensive end Jabari Zuniga, a third-round pick last year, was released but general manager Joe Douglas said New York would like him back on the practice squad.

Austin, a Queens, New York, native who went to Rutgers, played in 18 games the past two seasons with 16 starts. The sixth-round pick waved off outside concerns about the Jets' inexperienced cornerback group during training camp, insisting he was confident in himself — and the rest of the group — to succeed.

“I come to camp looking forward to get my next contract,” Austin said last month. “I don’t worry about who’s starting. I don’t worry about none of that. I mean, I think I’m the real deal. There ain’t no secret in that. Click the tape and press play, you know? Of course, I make mistakes, but there’s also a lot of plays I’ve made on that field that other corners in this league aren’t making.”

He'll be making them elsewhere this season.

Austin didn't play in New York's second preseason game at Green Bay for what Saleh called “personal reasons,” but the cornerback was still on the sideline. Saleh said that situation had nothing to do with the Jets moving on from Austin.

Douglas said the team was focused on giving the younger players an opportunity and rather than have Austin take a reduced role, the Jets let him go.

“Out of respect to him, give him an opportunity to find a larger role with another team,” Douglas said. “It was a very difficult decision because Bless is a stand-up guy and a hell of a competitor.”

Quincy Williams, who's a year older than Quinnen, was a third-round pick by the Jaguars out of Murray State in 2019. He has 59 total tackles in 18 games, including eight starts.

Saleh said he and his staff recalled scouting Williams during the draft and the fact he played in a similar defensive system in Jacksonville played into the decision to add him.

“He's got a tremendous amount of length for his size,” Saleh said of the 5-foot-11, 225-pound Williams. “He's extremely fast and violent. To get him in this system, where we feel he belongs, we're excited about the possibility and the growth we can see out of him.”

Ward was signed by the Chiefs as an undrafted free agent out of Old Dominion in 2019. He had five tackles and a sack in his only NFL game last season.

“When you watch his tape, he's got freakish ability,” Saleh said.

Redwine had 69 tackles, an interception and a half-sack in 27 games, including eight starts, for the Browns in two seasons.

NOTES: Douglas said Minnesota was “aggressive” in its pursuit of TE Chris Herndon, who was dealt Tuesday to the Vikings along with a sixth-round draft pick for a fourth-rounder. “They targeted Chris and things really heated up Monday and into Tuesday,” Douglas said. ... WR Jamison Crowder didn't practice Wednesday because of what Douglas called a “minor” groin injury.