Jets' Wilson needs to find second-half groove in first half 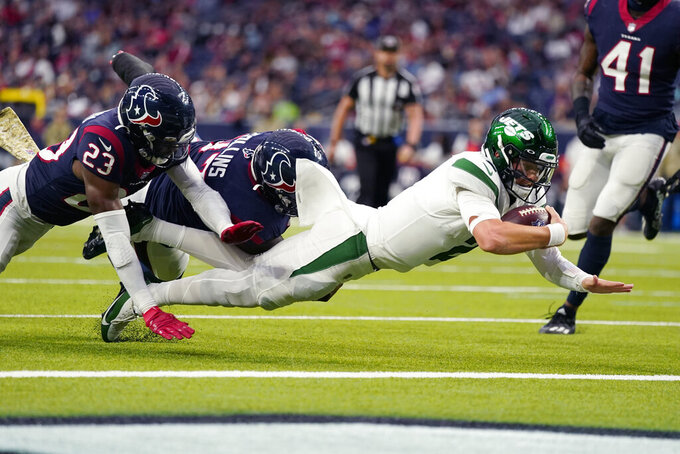 NEW YORK (AP) — Zach Wilson was back for the New York Jets, and so were the up-and-down moments of a rookie quarterback shaking off some rust.

The No. 2 overall draft pick in April was sidelined four games with a sprained ligament in his right knee — and it showed early. Wilson was 6 of 12 for 44 yards and an interception in the first half at Houston, but got considerably better in the second half while helping New York to a 21-14 victory on Sunday.

He finished 14 of 24 for 145 yards and a touchdown scramble, playing through some soreness in his knee.

“Yeah, he's tough as nails,” coach Robert Saleh said Monday. “His grittiness, toughness and his desire to get better is pretty darn high in terms of just how hard he works at it.”

It wasn't a fantastic performance by any stretch, and Wilson criticized himself after the game. But with the way he was struggling before the injury with nine interceptions and just four touchdowns and lots of mental errors, it's small steps that count in the big picture when it comes to Wilson.

“I love that he's hard on himself,” said Saleh, adding that the coaches feel the same way about themselves in trying to put Wilson in the best position to succeed.

“Was it his best game? No,” Saleh continued. “Did he do a lot of things, did he get comfortable as the game went on? Absolutely.”

He led a 10-play, 70-yard drive right before halftime that was capped by a touchdown. There was also an 11-play, 75-yard drive on New York's opening possession of the second half, which ended with Wilson running it in from 4 yards and diving over the goal line for the go-ahead score.

That play, in particular, showed how Wilson's instincts are maturing. It was a designed handoff to the running back, but Wilson saw the Texans loaded the box in front of him and improvised.

“So he pulled it and made something happen,” Saleh said. “Good for him, and that was pretty cool."

Maybe even more impressive was the 13-play, 36-yard drive in the fourth quarter that ended with a field goal, but ate 6:20 off the clock. It included two fourth-down conversions.

Wilson tweaked his knee during the game and he acknowledged it's “not fully stable,” but Saleh said it checked out fine and he'll have “no limitations” this week as the Jets prepare for a home game against Philadelphia.

The running game. Even with rookie Michael Carter sidelined with a sprained ankle, the Jets were able to gash the Texans for 157 yards on the ground. Tevin Coleman had a season-high 67 yards on 16 carries, Ty Johnson had 42 on six attempts and Austin Walter — who had one career carry coming in and was elevated from the practice squad Saturday — added 38 yards and a touchdown on nine carries.

Slow starts. See above ... Wilson saw the offense flow while he was sidelined, and he did the job in the second half. Now he needs to get that going in the first two quarters.

Elijah Riley. The former Army standout safety was signed off Philadelphia's practice squad earlier this month and he has been solid while starting the last two games for New York. Against Houston, Riley had five tackles, a tackle for loss and was strong in coverage.

Matt Ammendola. The kicker has been struggling mightily lately and he missed a 42-yard field goal attempt at Houston, making him 2 for 8 on kicks from 40 yards or longer. The Jets signed Alex Kessman to the practice squad last week, so Ammendola has been on notice.

202 — total yards the Jets allowed against the Texans, the fewest they've given up in a game since 2018. Houston had just 45 yards in the second half, making New York the third team to allow less than 50 in any half. That's a big improvement for a unit that had given up 430 yards or more in five out of six games until last week.

The Jets have already surpassed last season's victory total, and they'll try to make it two in a row when they host Philadelphia next Sunday. And they have never beaten the Eagles; they're 0-11 against them. It'll be the second straight game at MetLife Stadium for the Eagles, who fell 13-7 to the Giants.