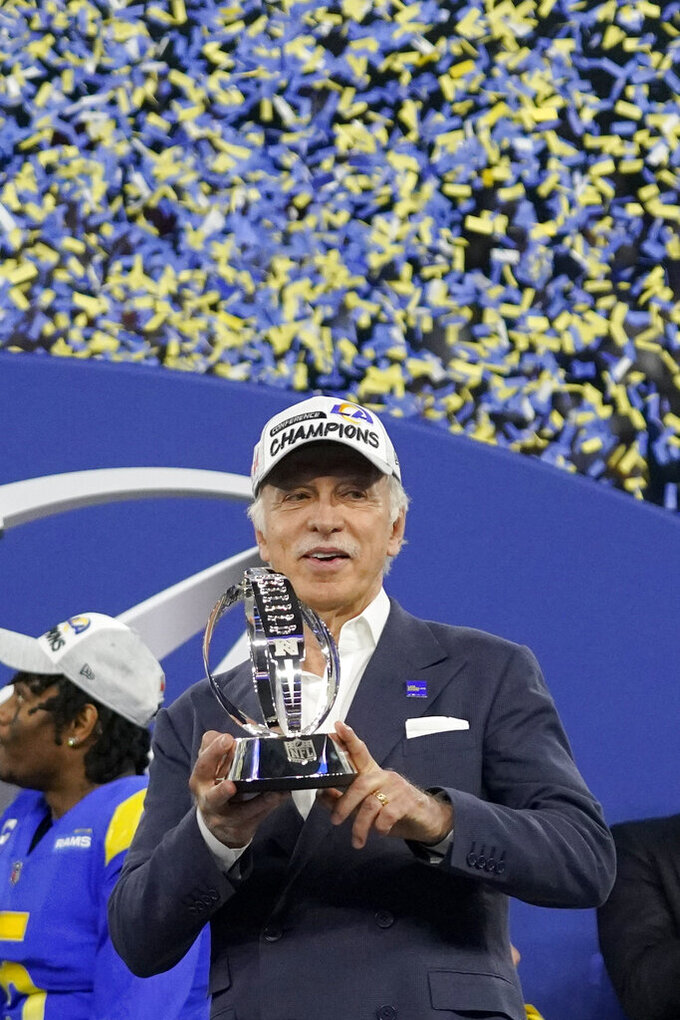 Winning the Super Bowl in your palatial home stadium as the culmination to a six-year saga of franchise relocation, innumerable setbacks and steady growth into a champion? Sounds like the Hollywood ending to an inspirational sports flick.

No hacky screenwriter came up with this final act, however. The Rams wrote this script themselves.

With hard work, bold personnel moves, tremendous resilience and a little bit of luck, they've earned this big finish when they win the Super Bowl for the first time as the Los Angeles Rams, giving their city its first NFL championship team in 38 years.

“We came a long way to get here, and there’s been a lot of hard work that people don’t see,” NFL receiving kingpin Cooper Kupp said. “We feel like we’ve earned the right to be here the hard way. Nothing was given to us just because the Super Bowl is at SoFi (Stadium).”

Destiny doesn't win sports trophies. The team that has the best players and that plays the best almost always does.

And while the Rams might feel like a team of destiny in this situation because of the Super Bowl's location, their homecoming saga, their many stars and the price they paid to assemble them, one fact looms largest.

They're just plain better than the Cincinnati Bengals.

It starts not in the backfields, but up front. Don't get distracted by the Rams' flashy playmakers on both sides of the ball, because they should also win their competition with Cincinnati in the trenches.

The Rams' defensive line and edge rushers are markedly superior to the Bengals' offensive line, and that mismatch should play havoc with everything Joe Burrow tries to do.

Burrow won't find it as easy to work game-changing magic when Aaron Donald, Von Miller and Leonard Floyd are either bearing down on him for sacks or forcing him to throw the ball so quickly that Cincinnati can only count on short routes. Even the Rams' run defense seems stacked to stop productive running back Joe Mixon, particularly if top run defender Sebastian Joseph-Day returns from his long-term injury and bolsters the line as expected.

The Rams' offensive line has been quietly solid all season long, and it should provide plenty of time for Matthew Stafford to find targets in the Bengals' inconsistent pass defense. The likely return of Darrell Henderson from long-term injury also gives Los Angeles three healthy, playmaking running backs for the first time all season, multiplying Sean McVay's play-calling options.

“If we have all of our guys, we can do a lot of things because that’s a lot of playmakers,” Stafford said. “We haven’t been completely healthy since we lost Robert (Woods), but hopefully we should have enough guys to get it done.”

Stafford and the Rams' stars know it's time to shine, and they have superior playmakers at most of the important spots on the field.

Burrow's rising talent is undeniable, but Stafford has capped an excellent regular season with three superb playoff games. The 13-year veteran is at the peak of his skills heading into his first Super Bowl, and if he passes for 315 yards, he will have the most prolific single postseason in NFL history.

Stafford has excelled in throwing downfield for the Rams, who led the league in 40-yard completions (18) and were third in 20-yard completions (65). The Bengals have struggled to stop long gains against their secondary, so the math isn't hard to do.

And sure, every player wants to win the Super Bowl. But Stafford has a visceral urgency after an NFL career that started when Burrow was in the seventh grade.

Kupp, the AP Offensive Player of the Year after winning the triple crown of receiving, is tremendously motivated after missing out on the Rams' trip to the Super Bowl three years ago due to injury. Odell Beckham Jr. can cap his remarkable half-season of image rehabilitation with a Super Bowl to remember.

On defense, Donald's teammates have turned the seven-time All-Pro's championship quest into one of their rallying points as he attempts to win the only NFL trophy that has eluded him.

Jalen Ramsey will rank among the pre-eminent defensive backs of his generation if he caps his spectacular All-Pro season with a Super Bowl ring. Von Miller, a godsend midseason acquisition as a leader and a pass rusher, can put his Hall of Fame worthiness far beyond doubt with a second Super Bowl title.

Are you sensing a theme here? There is an urgency to the Rams' quest — an imperative to complete this Hollywood story the right way — that looms as another prime reason the Rams are going to win.

The upstart Bengals want to win the Super Bowl. Who wouldn't? They're young, talented and perfectly capable of shocking the NFL for the third straight game.

But the Rams need to win.

The difficulties of their return home from St. Louis. The lows that led to McVay's transformational arrival. The draft picks they've sacrificed and the contracts they've issued — and eaten — to put together this remarkable roster.

When this movie fades to black with the Rams holding the Super Bowl trophy high at home, it'll be an ending for the ages.