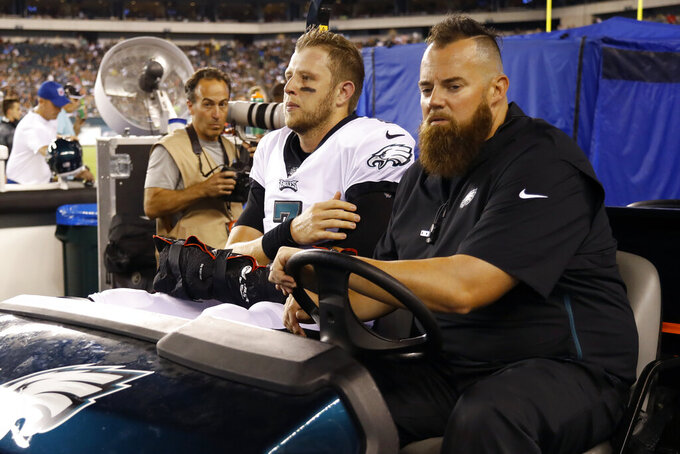 PHILADELPHIA (AP) — Eagles' backup quarterback Nate Sudfeld was back at practice Saturday wearing an arm sling, one day after surgery to repair a broken left wrist.

Two other players joined him on the Philadelphia sideline.

Two-time Pro Bowl right tackle Lane Johnson and second-year tight end Dallas Goedert are listed as week-to-week with injuries that aren't expected to force them to miss the season opener. Johnson has a knee injury and Goedert hurt his calf.

Goedert was one of a few key players who played in a 27-10 loss to Tennessee on Thursday night. He's expected to see plenty of action with Pro Bowl tight end Zach Ertz in certain formations.

Sudfeld said a plate and pins were inserted into his non-throwing wrist and he anticipates returning in September.

"I'm fortunate and blessed it was only my left wrist," Sudfeld said Saturday. "I'm trying to get back as soon as I can."

"We're very comfortable with the two we have," Pederson said. "They're going to get a lot of work these next several weeks, obviously, in practice. If we see the need to add depth and value, we will. But at this time, we're confident with the guys we have moving forward."

Wentz and the starters got plenty of reps in Saturday's practice that lasted two-plus hours. Pederson wouldn't say whether he plans to hold his No. 1 unit out until the first game against Washington on Sept. 8, but gave a strong indication that he values practices perhaps more than preseason action.

"These are game-like practices," he said.

Johnson might be the most valuable player on offense other than Wentz. In 2016, the team was 2-8 without him when he was suspended 10 games for violating the league's substance abuse policy and 5-1 with him. His absence in preseason allows second-year pro Jordan Mailata to get more experience. Mailata hadn't played football before he was drafted in the seventh round in 2018 after starring as a rugby player in Australia.

Notes: CB Ronald Darby took part in some 7-on-7 drills in his first real practice after ACL surgery last season. ... DE Derek Barnett also participated in some drills for the first time since shoulder surgery ended his 2018 season. ... S Blake Countess is out "multiple weeks" with a hamstring injury. ... LB Kamu Grugier-Hill was walking without crutches a week after suffering an MCL strain.