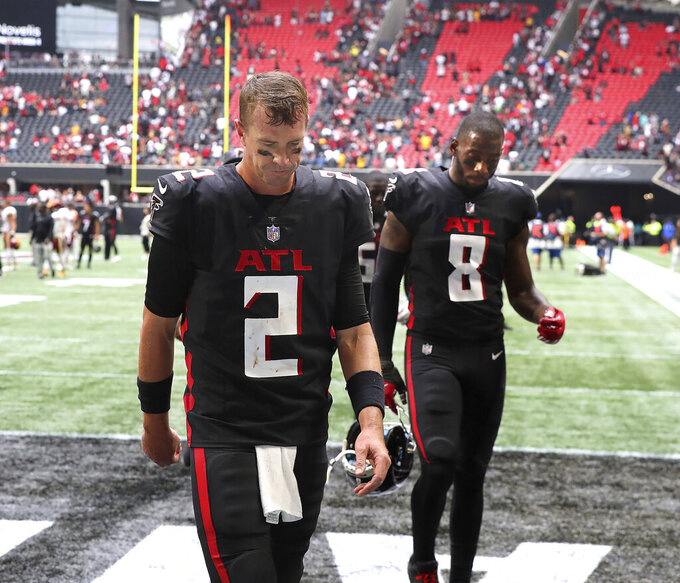 Atlanta Falcons quarterback Matt Ryan (2) and tight end Kyle Pitts (8) walk off the field after losing to the Washington Football Team in an NFL football game on Sunday, Oct. 3, 2021, in Atlanta. (Curtis Compton/Atlanta Journal-Constitution via AP) 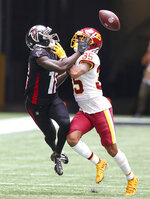 ATLANTA (AP) — Cordarrelle Patterson tried but he couldn’t save the Atlanta Falcons all by himself.

Patterson flashed his athleticism multiple times in Sunday’s 34-30 loss to Washington, most notably in catching three touchdown passes. In the end, however, he wasn’t even on the field for Matt Ryan’s 37-yard Hail Mary pass on the game’s final play.

“Like I say, when coach calls my name, I’ll be ready,” Patterson said after catching five passes for 82 yards.

Patterson wasn’t eager to elaborate on his big plays. He was too disappointed in the outcome.

For quarterback Matt Ryan, the loss came down to an ineffective fourth quarter.

Forget the Hail Mary pass on the final play of the game. As Ryan said, those are low percentage plays. They can go either way but rarely do they end up as touchdowns.

Mike Davis’ short touchdown catch on the first play of the final period put the Falcons up 30-22, but they converted just one first down on the next two possessions and took only 4:43 off the clock in the process.

“If we want to be the kind of football team that we want to be and the type offense we’d like to be, you get in those situations and you want to move the football, burn clock and get some first downs and end that football game,” Ryan said after dropping to 5-1 against Washington in his career. “We didn’t do it. That part’s disappointing, and we’ve got to improve there.”

This was another textbook Atlanta loss. Go back-and-forth with the opponent in front of a half-empty Mercedes-Benz Stadium and wind up on the losing end.

Everything wasn’t bad. Ryan completed 25 of 42 passes for 283 yards and four scores. Patterson shined. The Falcons were 10 for 16 on third downs. They were 3 for 4 in the red zone.

“It’s obviously frustrating when you don’t finish games,” first-year coach Arthur Smith said. “We had multiple opportunities to win that game. We didn’t. The second-to-last offensive drive — that was the one where we moved the ball a little bit. We had the third-down call they picked up. We have to do a better job.

“We had plenty of chances to pick the ball. We didn’t. You’ve got to gIve Washington credit. They made plays when they had to. The quarterback extended plays and threw them up there and their guys came down with them.”

Linebacker Foye Oluokun blamed the defense for not consistently pressuring Heinicke, who moved effectively in the pocket, dodging pressure and extending plays with his feet. On the last touchdown, a 30-yard pass to J.D. McKissic, Heinicke scampered to his left and kept his eyes moving through his progressions before he saw the running back come open in the right flats.

All McKissic had to do was make linebacker Deion Jones, who was in pursuit, miss and he was off down the sideline to dive over the pylon for the decisive score. Had Heinicke been pinned in the pocket by a persistent pass rush, that play might never have resulted in a touchdown.

“We could’ve played a cleaner game for sure,” Oluokun said. “Any time you start dragging out little things here and there into a long drive and then you’re tired — as long as you play a cleaner football game, we’ll get the outcome we want but we’ve got to work on playing cleaner for sure.”

Patterson described the mood in the locker room as somber.

“It sucks, but we’re all grown men here,” Patterson said. “We’ve got to pick this stuff up, come in tomorrow, watch the film and just learn from it and try to get to 2-3.”