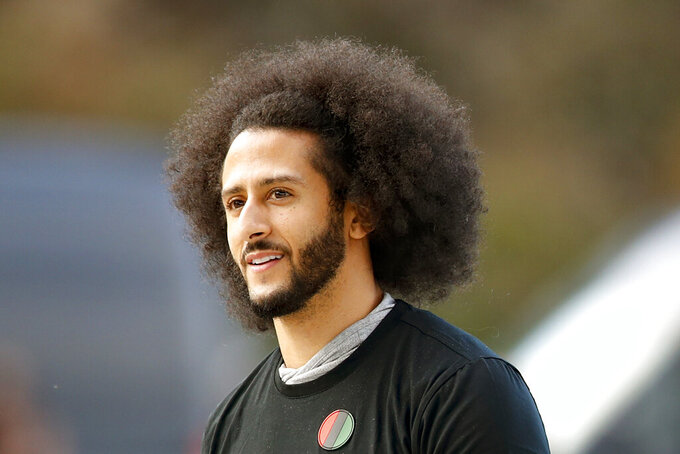 FILE - In this Nov. 16, 2019, file photo, free agent quarterback Colin Kaepernick arrives for a workout for NFL football scouts and media in Riverdale, Ga. The U.S. Navy is investigating a video in which military work dogs attacked a "Colin Kaepernick stand-in" during a demonstration at a Navy Seal Museum fundraiser. The event happened last year at the museum in Fort Pierce, Florida, but the video resurfaced over the weekend. On Sunday, the U.S. Navy said in a statement that it appears no active duty personnel were involved. (AP Photo/Todd Kirkland, File)

FORT LAUDERDALE, Fla. (AP) — The U.S. Navy is investigating an incident in which dogs attacked a “Colin Kaepernick stand-in” during a K-9 demonstration during a 2019 fundraiser at the Navy SEAL Museum in Florida.

The Navy said in a statement posted on Twitter that officials became aware of the video on Sunday.

Kaepernick is a former San Francisco 49ers quarterback who began kneeling during the playing of “The Star Spangled Banner" before games to protest social injustice and police brutality. He played his final NFL game in January 2017. He offered support to those protesting the death of George Floyd at the hands of Minneapolis police officers in May, and the NFL's commissioner has apologized for not listening earlier to players' concerns about social injustice.

The videos show four dogs attacking a man, who is wearing a red Kaepernick football jersey over heavily padded gear as people stand nearby watching. In a second video, the man is laying on the ground when he's approached by men wearing fatigues and holding rifles, saying, “On your belly." The man replies, “Oh, man, I will stand," as he rolls over, followed by laughing from the crowd.

The videos were apparently posted on Instagram last year and resurfaced over the weekend.

“The inherent message of this video is completely inconsistent with the values and ethos of Naval Special Warfare and the U.S. Navy," the statement said.

The Navy said the “initial indications" are that no active duty personnel or equipment were used in the demonstration at the “independent organization's event."

The Navy SEAL Museum is located in Fort Pierce, Florida, which is north of West Palm Beach on the state's Atlantic Coast. According to its website, the National Navy UDT-SEAL Museum is the only museum dedicated solely to preserving the history of the U.S. Navy SEALs and their predecessors.

This story corrects the style in the references to the Navy SEAL Museum.