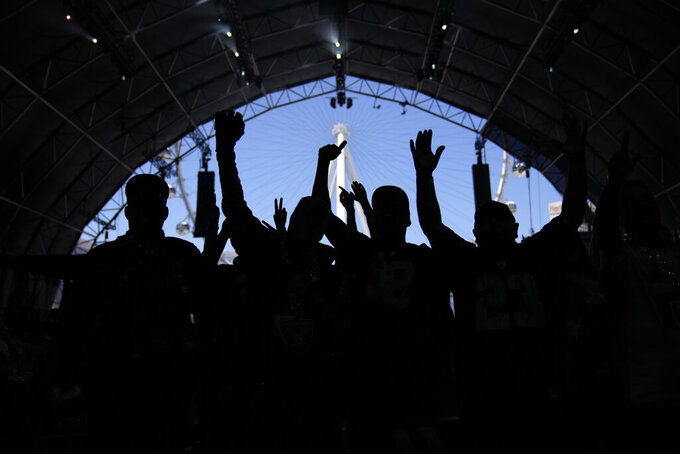 LAS VEGAS (AP) — First-time general manager Dave Ziegler and new coach Josh McDaniels wrapped up their first draft believing the Las Vegas Raiders helped themselves up front on both sides of the line of scrimmage by strengthening their offensive and defensive lines.

“You stick to your process and Dave’s laid it out for us and we’ve done a good job of going back and forth discussing who the right people are to take and evaluate and all those players,” McDaniels said Saturday from the team’s headquarters. “And really there’s no right or wrong at this point.

"We took the players that we felt were the best players at that position when we were picking at that time of the draft and now it’s time to work and develop those people.”

The Raiders opened their draft on the second day by choosing Memphis four-year starter Dylan Parham, a versatile offensive lineman they’re hoping will help an offensive line that was one of their weakest units last season.

On Saturday, the final day of the draft, Las Vegas added to the offensive line room by taking tackle Thayer Munford from Ohio State (238th).

Last season, the Raiders tied for 11th in allowing 40 sacks, while their rushing attack averaged a mere 95.1 yards per game — fifth-lowest in the league.

Earlier in the day, Las Vegas chose linemen Neil Farrell Jr. from LSU (126th) and Matthew Butler from Tennessee (175th) with hopes their experience from the vaunted SEC will bolster a defensive front that has been rebuilt this offseason around edge rusher Maxx Crosby.

With Denver trading for Russell Wilson, the Raiders have arguably the toughest quarterback triumvirate to defend in the AFC West, also facing Kansas City’s Patrick Mahomes and the Chargers’ Justin Herbert.

With the 122nd pick Saturday, Las Vegas nabbed Georgia running back Zamir White, someone who has been fighting since before he was born, as chronicled in a story by SEC Network and ESPN.

Affectionately known as Zeus, the chiseled 225-pound power back weighed 1 pound when his mother was six months pregnant when doctors wanted to terminate the pregnancy. White — who tore his right ACL as a senior in high school and then his left ACL arriving in Georgia, all within a year after — was born with a cleft lip and cleft palate and was given two weeks to live when he was born.

“I’ve been waiting for this my whole life,” White said during a Zoom interview. “This means the world to me.”

The Raiders finished their draft by choosing UCLA running back Brittain Brown (250th). Along with White, a message may have been sent to a running back room with question marks after the team announced it would not pick up Josh Jacobs’ fifth-year option.

“Every spot on our team is going to have competition," McDaniels said. "Whether we drafted somebody or didn’t draft somebody, there’s competition at every spot on the team.”

The Raiders didn’t have a first-round draft choice for the first time since 2012.

Ziegler said he liked the idea of adding building blocks with mid-round contributors. Under the previous regime, the Raiders struggled in previous drafts, as evidenced by the team’s announcement to not pick up fifth-year options on Jacobs, and his fellow 2019 first-round picks Clelin Ferrell and Johnathan Abram. Last year, the team released 2020 first-round picks Henry Ruggs III and Damon Arnette.

“When you find players in the mid-rounds that ultimately develop into core contributors for your team, there’s a level of pride in finding those guys,” Ziegler said.

While offensive lineman Dylan Parham has plenty of upsides, offensive line coach Carmen Bricillo might look to address the Raiders’ third-round pick’s aptness for false-start penalties. That's an area the Raiders became familiar with after Alex Leatherwood tied for second-most in the NFL with seven pre-snap penalties — all false starts.

During his four-year career at Memphis, Parham was flagged 10 times for false starts and seven additional times for holding, per Sports Info Solutions. Bricillo, the O-line coach in New England the last two seasons, saw his Patriots called for 17 false-start penalties last season, 1.75 less than the league average of 18.75.