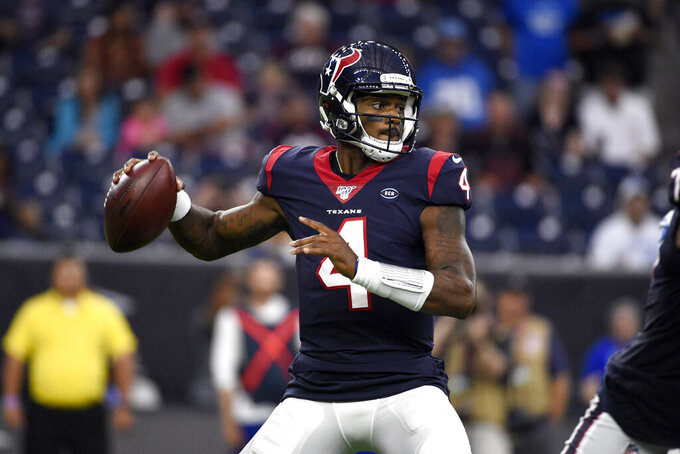 Houston Texans quarterback Deshaun Watson (4) throws a pass against the Detroit Lions during the first half of an NFL preseason football game Saturday, Aug. 17, 2019, in Houston. (AP Photo/Eric Christian Smith)

Now that Watson, the 12th overall pick in the 2017 draft, is comfortable in O'Brien's offense, he's looking to fine tune things he believes will help the team run smoother.

This year he'll play behind a revamped line which is looking for veteran left tackle Matt Kalil to return from injury to anchor the group, and expecting a solid season from right tackle Seantrel Henderson after he broke his ankle in Week 1 of 2018. Houston also needs tackle Tytus Howard to contribute immediately after selecting him with the 23rd overall pick in this year's draft.

Outside linebacker Jadeveon Clowney missed all of training camp, unhappy that he and the team couldn't agree to a long-term deal. But the Texans expect him to sign his franchise tender and be ready for the start of the season. Clowney has kept in touch with defensive line coach Anthony Weaver and he believes the top overall pick in the 2014 draft will be able to get up to speed quickly once he returns.