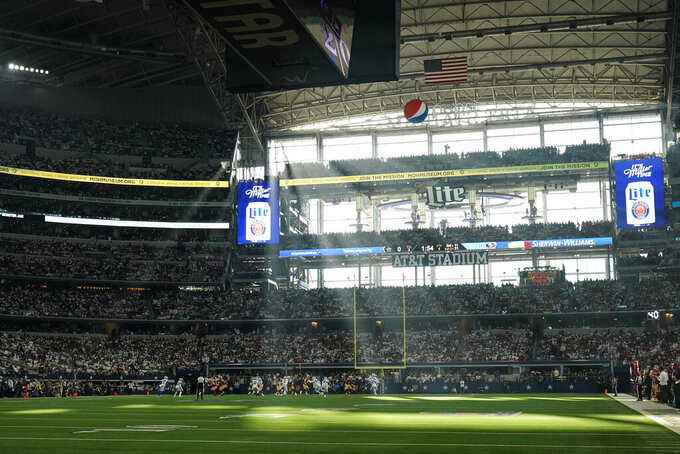 Fans at AT&T Stadium watch during the first half of an NFL wild-card playoff football game between the Dallas Cowboys and the San Francisco 49ers in Arlington, Texas, Sunday, Jan. 16, 2022. (AP Photo/Tony Gutierrez)

TV ratings for the NFL's wild-card round increased 21% over last year despite most of the games not being in doubt going into the fourth quarter.

The six games averaged 30.5 million viewers, making it the second-highest average for the postseason's opening weekend over the past six seasons.

CBS and Nickelodeon's broadcast of San Francisco's 23-17 victory over the Dallas Cowboys led the weekend, averaging 41.5 million viewers. The audience peaked at 50.2 million for the conclusion. It is the most-viewed game this season, surpassing the 40.8 million for the Thanksgiving Day game between the Cowboys and Las Vegas Raiders.

It is also the second-most watched wild-card game over the past eight seasons, with Detroit-Dallas in January 2015 (42.3 million) being the only game to outdraw it.

The Nickelodeon-only audience was 1.33 million, which was down 35% from last year's 2.06 million. More viewers were likely to stick with the traditional CBS broadcast because of the game going down to the final play.

The first Monday night wild-card game averaged 23.2 million on ESPN, ABC, ESPN2 and ESPN Deportes, making it the most watched Monday night NFL game since ESPN became the main broadcaster in 2006. The audience for the Los Angeles Rams 34-11 win over Arizona peaked at 27.9 million during the second quarter.

The NFL, Nielsen and Abode Analytics also said there were over 34 billion total minutes — an average of 1.4 million per minute — streamed across all platforms, an increase of 35% over last year 72% compared to two years ago.

Regular-season games averaged 17.1 million viewers across television and digital platforms — a 10% increase over 2020 and is the league’s highest average since 2015.