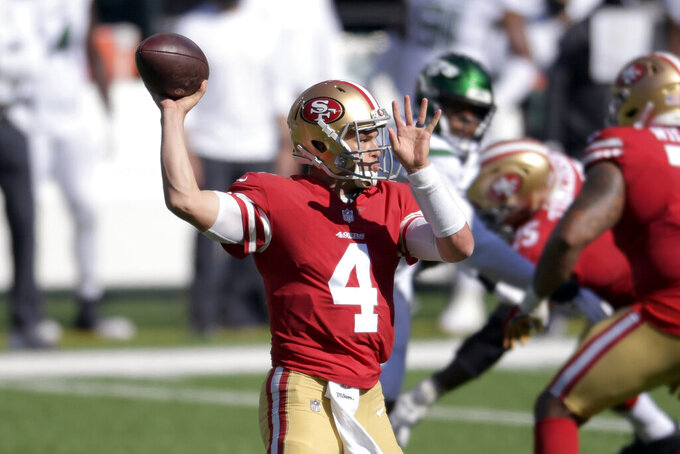 San Francisco 49ers quarterback Nick Mullens (4) throws a pass during the second half of an NFL football game against the New York Jets, Sunday, Sept. 20, 2020, in East Rutherford, N.J. With Jimmy Garoppolo likely sidelined by a sprained ankle, Mullens appears set to get his first start at quarterback for the Niners in nearly 21 months, against the New York Giants. (AP Photo/Bill Kostroun)

EAST RUTHERFORD, N.J. (AP) — The San Francisco 49ers and the New York Giants are battling the injury bug after just two games, as well some other scary issues.

For the Niners (1-1), it's just being back at MetLife Stadium on Sunday and having to face the winless Giants (0-2) without quarterback Jimmy Garappolo, NFL Defensive Rookie of the Year Nick Bosa, halfback Raheem Mostert and defensive tackle Solomon Thomas, and All-Pro tight end George Kittle.

The Giants are not scary. They are enduring yet another bad start and facing the prospect of missing the playoffs for the eighth time in nine years.

San Francisco's concern is the stadium and it's new artificial surface. In a 31-13 win over the Jets last weekend, the 49ers saw Garappolo sprain an ankle and Mostert, Thomas and Bosa, and backup halfback Tevin Coleman leave with knee injuries. Kittle is going to miss a second straight game with a knee injury after being hurt in the season opener.

The Niners complained to the league about the “sticky” surface and now they have to play on it again. This time Nick Mullens is starting at quarterback for the first time since 2018.

San Francisco coach Kyle Shanahan says he has put the field issue to rest, and told his players to focus on the game. The league inspected the field Wednesday and said it meets all applicable standards and protocols for a field surface.

“I’m a big believer of controlling the controllables, doing what I can and controlling what I can control,” 49ers linebacker Fred Warner said. “The playing surface that we’re going to play on Sunday, I have no control over that. I’m letting everybody else handle that.”

Giants coach Joe Judge has had his team work on the field since training camp opened in late July. None of his players complained about it, he said.

What Giants fans have to complain about is the team's anemic offense, which will be without running back Saquon Barkley (knee) for the rest of the season. Wide receiver Sterling Shepard (toe) is out for at least three games.

New York is averaging 14.5 points and turned the ball over four times, with quarterback Daniel Jones throwing three interceptions and losing a fumble. The offensive line has struggled and the running game is last in the league.

The defense has been surprisingly good, allowing 43 points, only 10 in the second half.

It has left Judge looking for his first win, which is par for the course. The Giants have started 0-2 every year since 2013, with the exception being in 2016, the only year they made the playoffs.

“We’re not going to raise the white flag on anything,” Judge said. “Our guys are going to fight straight on through. We have a job to do regardless of the circumstance or outcome of the previous game.”

Some things to watch for Sunday:

With Barkley gone, the Giants will employ a backfield by committee.

Dion Lewis handled the load against the Bears with Wayne Gallman inactive. Expect Gallman back this week along with former Falcon Devonta Freeman, who was signed to a one-year, $3 million contract.

Judge said the game plan will utilize each of their strengths. He added if one back starts to rip off yards, he may become “the guy” for a time.

Mullens will be starting for the first time since the final eight games of the 2018 season when Garoppolo was sidelined. He averaged 284.6 yards passing with a 90.8 rating. Mullens didn’t throw a single pass last season and went 8 for 11 for 71 yards and one interception last week against the Jets.

“I know our players believe in him and he’ll be fine,” Shanahan said.

Free agent signee James Bradberry gives the Giants a solid cornerback. He leads the league with six passes defended and last week he rallied New York with an interception and a tip that led to another pick by Julian Love.

The other cornerback is a problem. Corey Ballentine started the first two games. He was replaced by Isaac Yiadom for the second half last week. The position is wide open and coordinator Pat Graham said Ryan Lewis and Brandon Williams are also in the mix for the job.

The 49ers requested back-to-back East Coast games so they could stay over for the week and reduce travel. They ended up spending the week at The Greenbrier resort in West Virginia, which has hosted training camps in the past. The resort offers bowling, falconry, horseback riding and a gun club among other activities, although the 49ers are focused mostly on football.

Evan Engram looked so good in training camp, many predicted this would be the breakout season for the tight end who was New York's first-round pick in 2017.

It hasn't happened. The oft-injured Engram had a drop on his first target this season and then was invisible for almost the next seven quarters. He woke up in the final 19 minutes against the Bears, catching six passes for 65 yards.

Will he show up Sunday?

By Maryclaire Dale 58 minutes ago
By John Wawrow 2 hrs ago
By W.g. Ramirez 6 hrs ago
By Noah Trister 13 hrs ago
By Kyle Hightower 14 hrs ago