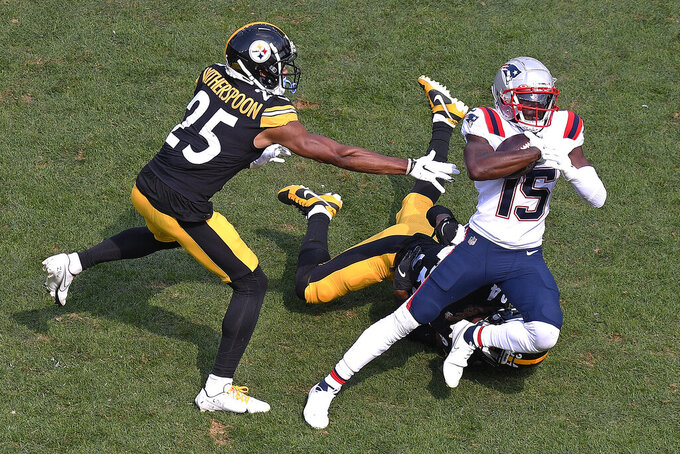 New England Patriots wide receiver Nelson Agholor (15) gets away from Pittsburgh Steelers cornerback Ahkello Witherspoon (25) and Cameron Sutton, rear, after making a catch during the second half of an NFL football game in Pittsburgh, Sunday, Sept. 18, 2022. The Patriots won 17-14. (AP Photo/Don Wright)

FOXBOROUGH, Mass. (AP) — Patriots center David Andrews had only one thought as his team held a 17-14 lead over the Steelers and faced third down late in the fourth quarter.

“You are going back to the huddle thinking, ‘Oh man, I hope they call a run here,’” he recalled.

Andrews got his wish.

“Then we went back to it and finished it."

The play, a 5-yard run by Damien Harris, sealed New England’s first victory of the season. It also served as the capstone to a redemptive performance by an O-line roundly criticized during a Week 1 debacle at Miami that was rife with communication issues and included allowing a disastrous strip-sack on quarterback Mac Jones that was returned for a touchdown.

Against the Steelers, that same O-line didn’t allow their quarterback to be taken down despite him being under pressure on 34% of his drop-backs.

It enabled Jones to spread the ball around to six different receivers and complete 21 of his 35 passes for 252 yards and a touchdown.

Jones was particularly complimentary on the play of rookie left guard Cole Strange, who saw the ball run to his side four times during the decisive final drive.

“He’s doing a great job learning the offense,” Jones said. “It’s hard coming in as a rookie and starting. ... He’s just got to continue to grow and improve what he wants to improve on. That’s what I’ll tell him.”

Throughout the preseason coach Bill Belichick brushed aside questions concerning the play calling system the Patriots would be employing following the exit of former coordinator Josh McDaniels.

While senior football advisor Matt Patricia has held the play call sheet in the first two games, Belichick seemed more involved on Sunday between series and could be seen leading conversations with Jones while Patricia and quarterbacks coach Joe Judge listened in.

The fruits of Belichick’s increased involvement seemed to show up on the field and translated into an offense that had a lot more fluidity. Belichick has repeatedly reiterated that the ultimate responsibility for the offense would lie with him.

Sunday’s structure could be a glimpse of how things will look going forward.

The Patriots kept Steelers quarterback Mitch Trubisky in the pocket for most of the game, sacking him three times while pressuring him on 21.6% of his drop-backs according to Pro Football Focus.

Still, Pittsburgh remained a threat as it converted on 8 of 15 of its third downs. Through two games, New England’s defense has allowed a 48.3% conversion rate on that key down. Though they limited big plays, safety Devin McCourty acknowledged there’s room to clean some things up.

“I think that with every team we play, there is going to be an element of dangerous players,” he said. “We’ve got to do a better job of that in the back end and I think our front has to make them pay for trying to buy time to create an opportunity to throw the ball downfield.”

Receiver Nelson Agholor attacked the preseason with something to prove coming off a mostly underwhelming first season in New England in 2021. He followed up an active Week 1 with his first 100-yard receiving game as a Patriot, pulling in six catches for 110 yards, including a 44-yard touchdown in the second quarter.

DeVante Parker was one of the Patriots’ top performers at receiver during training camp, regularly reeling in deep catches and tightly contested 50-50 balls in the red zone. That explosiveness hasn't shown up through two regular-season games. He was targeted twice but didn’t have a catch against the Steelers. That’s after he had only one catch for 9 yards in Week 1 vs. Miami.

Running back Harris limped off the field following his game-clinching, third down run in the closing minutes. But he said afterward that he was fine.

56 — Kicker Nick Folk extended his streak to 56 consecutive made field goals under 50 yards with a 28-yarder in the first quarter. It tied the NFL record with Ryan Succop (2014-17 with Tennessee). Folk’s previous miss inside the 50-yard line was a 45-yard attempt in the 2020 season opener vs. Miami.

New England’s defense has a big test in its home opener this week as it welcomes Baltimore and quarterback Lamar Jackson. Jackson has been efficient through the air and on the ground thus far.

The Ravens also aren’t expected to be in a good mood coming off their fourth-quarter collapse against the Dolphins.