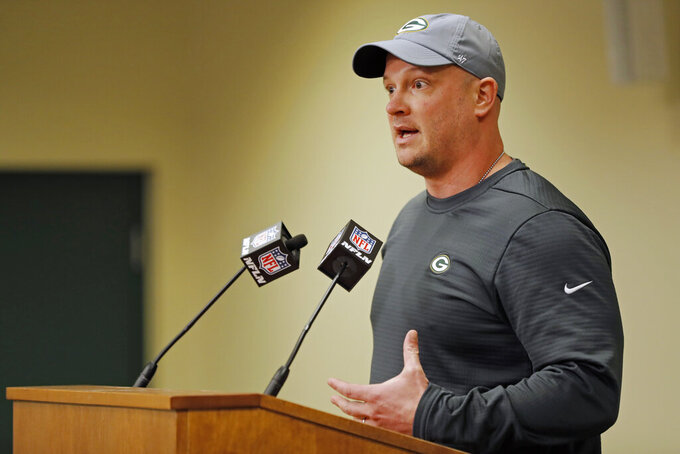 FILE - In this Feb. 18, 2018 file photo, Green Bay Packers' offensive coordinator Nathaniel Hackett addresses the media during a news conference in Green Bay, Wis. Hackett downplays the notion that he has a revenge motive in Sunday, Nov. 15, 2020 game with the Jacksonville Jaguars, who fired him from the same position two years ago. Hackett was part of Jacksonville coach Doug Marrone’s staff in 2017 when the Jaguars advanced to the AFC championship game, but he was dismissed the next year.(AP Photo/Matt Ludtke, File)

Green Bay Packers tight end Marcedes Lewis says it took him “about a good year” to get over the way his 12-season tenure with the Jacksonville Jaguars ended.

Lewis will face his former team Sunday for the first time since the Jaguars unceremoniously released him in March 2018 to save $3.5 million in cap space. Lewis ranks second in Jaguars history in career touchdown catches (33) and third in receptions (375) and yards receiving (4,502).

“I saw that I was being released on ESPN,” Lewis said Friday. “At the same time I’m looking at ESPN, my agent is calling me. I didn’t want to hear from him first. I’d rather them hit me up and at least give me an option of whether to take a pay cut or whatever, at least have a conversation. We never got to that point.”

Lewis isn't the only former Jaguar who has found a home in Green Bay (6-2).

Packers offensive coordinator Nathaniel Hackett had the same position at Jacksonville when the Jaguars reached the AFC championship game in 2017, but he was fired a year later. The Packers signed wide receiver Allen Lazard off Jacksonville's practice squad in December 2018. The Jaguars waived running back/kick returner Tyler Ervin last year before the Packers claimed him.

Jacksonville selected Lewis out of UCLA with the 28th overall pick in the 2006 draft. He was a team captain and well-respected locker room voice when the Jaguars released him. The move came a week after the start of free agency and a month after Jacksonville had exercised an option in his contract.

Lewis, who agreed to take a pay cut to remain in Jacksonville in 2015, wasn’t happy the team signed Austin Seferian-Jenkins to a two-year, $10 million contract in free agency and made it clear he planned to skip voluntary workouts. Tom Coughlin, the Jaguars’ personnel chief at the time, cut him days later.

“I understand the business side of it,” Lewis said. “But at the same time, for somebody that was there for 12 years and always held the organization in high regard and never put myself in bad situations to make the organization look bad, I just felt like to a man it would have been cool to just do it the right way. I felt like we could have handled it different, but we’ve definitely moved on, no hard feelings.”

Since Lewis’ exit, the Jaguars have struggled as much at tight end as any position on the roster, including quarterback. Jacksonville (1-7) will be trying to avoid an eighth consecutive loss Sunday at Green Bay.

Twelve tight ends have caught passes for Jacksonville in the past three years. Seferian-Jenkins appeared in five games in 2018, catching 11 passes for 90 yards and a touchdown, before also getting cut.

While the Jaguars have struggled without Lewis, the Packers have valued the 36-year-old’s presence.

“I think he’s a fantastic human being,” Packers quarterback Aaron Rodgers said earlier this season. “He’s a really interesting guy. He has a lot of wisdom and insight. He’s just definitely one of my favorite teammates that we’ve ever had around here. He’s a fantastic leader. A guy much like we’ve had in Julius Peppers, Charles Woodson, T.J. Lang, guys when they start talking, everyone shuts up and listens. That’s how it is with ‘Big Dog.’ “

Lewis has four catches for 32 yards and two touchdowns this season while primarily working as a blocker. He could have a bigger role Sunday because Packers tight end Robert Tonyan is questionable with an ankle injury.

Lewis would like to continue doing that for some time to come. The 15th-year pro says he wants to play at least two more seasons.

“Being here has kind of rejuvenated my love for ball even more,” Lewis said. “Like I always tell you, I’m just in gratitude every day. You never know what’s going to happen tomorrow. That’s why I’m always in my moment and I’m immersed in the moment. We’ll worry about the rest later.”