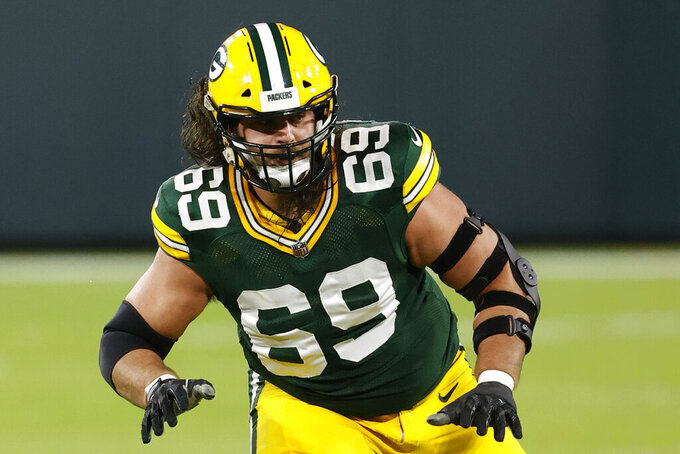 FILE - Green Bay Packers offensive tackle David Bakhtiari (69) plays during an NFL football game against the Chicago Bears, in Green Bay, Wisc., in this Sunday, Nov. 29, 2020, file photo. The All-Pro left tackle is on the physically unable to perform list after tearing his left anterior cruciate ligament in a Dec. 31 practice. “I’m like really itching to get back out there,” Bakhtiari said Tuesday, Aug. 3, 2021. (AP Photo/Jeffrey Phelps, File)

Green Bay Packers offensive tackle David Bakhtiari has used his big personality to make his presence felt in training camp even as he’s unable to practice.

How soon he will join his teammates on the field remains uncertain. The All-Pro left tackle tore his left anterior cruciate ligament in a Dec. 31 practice and isn’t speculating on when he will return.

“I’m like really itching to get back out there,” Bakhtiari said Tuesday. “I don’t like seeing other people do my job, but it’s all part of the course I have to play. Like I said when it happened, there’s this road I have to go down. It’s a long road and I don’t like it, but the only way to get to where I want to be is I’ve got to go down that road. So I’m currently down there right now. We’ll see when it ends.”

Head coach Matt LaFleur said the Packers are preparing as though Bakhtiari won’t be ready for the start of the season.

“Until we know and have a better indication of when he’s going to be back here, I think that’s the way you have to prepare,” LaFleur said. “Just know eventually he will be out there, and that will give us a big boost.”

Bakhtiari is finding ways to contribute by keeping the mood upbeat amid the daily drudgery of training camp.

He gave quarterback Aaron Rodgers a golf cart that the three-time MVP uses to travel from the locker room to the practice field each day.

Bakhtiari posted an Instagram video that shows him presenting the golf cart, which features a pink steering wheel and an Aston Martin logo. Bakhtiari joked that radio host Pat McAfee and Rodgers kept pointing out that he didn’t give his star quarterback any gifts.

Bakhtiari and new Packers offensive tackle Dennis Kelly bear more than a passing resemblance, so they swapped jerseys before Kelly’s first practice. When Kelly showed up wearing the No. 69 jersey, observers briefly wondered whether Bakhtiari had made an amazingly rapid recovery.

“I’d never met him before, I’ve only just been tagged in stuff saying that he’s like my doppelganger,” Bakhtiari said. “I think it’s hilarious. He’s told me stories of him being down in Chicago and guys were being adamant that that’s me. He’s like, ‘Guys, I’m not David. Leave me alone.’”

The Packers hope they see a healthy Bakhtiari in that No. 69 jersey before long.

He missed four regular-season games plus both playoff contests last year. The Packers blocked well in his absence until the NFC championship game, when they allowed Tampa Bay’s Shaquil Barrett and Jason Pierre-Paul to combine for five sacks.

Without him, the Packers will rely on versatile linemen — notably Elgton Jenkins, who made the Pro Bowl as a left guard last season but also started games at center and right tackle.

Jenkins is getting much of the work at left tackle during training camp.

“I like the challenge,” Jenkins said. “I’ve never really backed down from a challenge. I’ve been doing this since college — my first two years playing left tackle, then guard, then going to center. So I feel like it’s kind of fun. It keeps my mind spinning and things like that.”

Whether or not the Packers have Bakhtiari at the start of the season, they’ll need to fill a major hole on the offensive line since All-Pro center Corey Linsley left for the Los Angeles Chargers via free agency. LaFleur said Tuesday that rookie Josh Myers, a second-round pick from Ohio State, is the likely starter at center.

Even without Linsley in the middle, the Packers feel good about their line. LaFleur has called this offensive line “as deep of a group as I’ve ever been around.”

It will be even deeper once Bakhtiari is available.

NOTES: LaFleur said reserve linebacker Randy Ramsey suffered a significant injury on Monday without going into details. Ramsey appeared to hurt his leg. “Hopefully we’ll get him back at some point, but I know it was definitely not one of those injuries you’d like to have,” LaFleur said. … The Packers signed tight end Daniel Crawford and placed wide receiver Bailey Gaither on the reserve/retired list.