Packers will use bye to prepare for finishing stretch 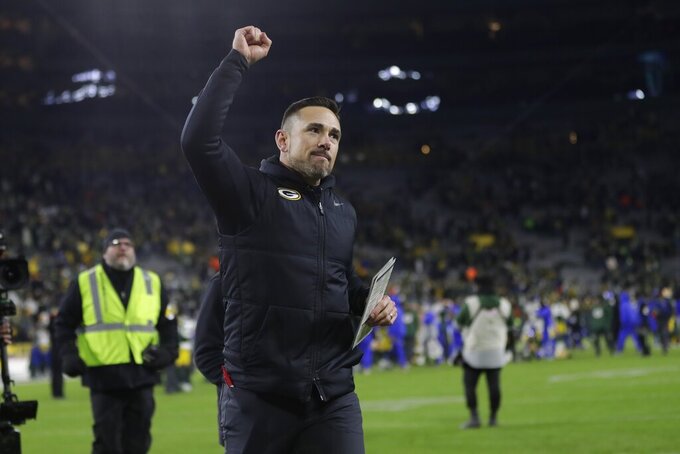 GREEN BAY, Wis. (AP) — Matt LaFleur won the NFC North in each of his first two seasons as Green Bay Packers coach, and he’s well on his way to making it 3-for-3.

However, in a city known for championships, division titles aren’t celebrated with commemorative banners.

Super Bowls are what matter.

The next step for LaFleur is to lead the Packers to their first title since the 2010 season. The uncertainty surrounding quarterback Aaron Rodgers’ future only adds to the sense of urgency.

Coming off back-to-back 13-3 seasons and appearances in the NFC championship game, the Packers are 9-3 at their long-awaited bye.

While the records are similar, this is a different team. Last year’s club led the NFL with 31.8 points per game and was third with an average scoring differential of plus-8.8 points.

This team hasn’t been anywhere near as dominant, but LaFleur likes its mental toughness and how it could translate to the postseason.

“I think every team’s a little bit different,” he said, “but, in terms of some of the adversity and showing the resiliency to be able to perform against some really good teams, it has been fun to watch these guys grow together, grow as a team, come closer together, more united.”

But they’ve gotten limited to no contributions from 2020 All-Pro left tackle David Bakhtiari (zero games because of last season’s ACL tear), cornerback Jaire Alexander (out the past eight games with a shoulder injury) and 2020 Pro Bowl outside linebacker Za’Darius Smith (hasn’t played since the opener because of back surgery).

There’s hope those three could return for the stretch run.

Tight end Robert Tonyan and 2020 Pro Bowl guard Elgton Jenkins, who replaced Bakhtiari at left tackle, are out for the season with knee injuries.

Rodgers and Adams each missed a game because of COVID-19, and Rodgers didn’t practice last week because of a broken pinky toe.

Helping pick up the slack have been an unlikely assortment of players. Outside linebacker Rashan Gary, the 12th pick of the 2019 draft, and running back AJ Dillon, a second-round pick in 2020, are rising stars.

Veteran inside linebacker De’Vondre Campbell, who was signed in June, and cornerback Rasul Douglas, who was signed off Arizona’s practice squad in October and contributed pivotal interceptions against the Cardinals and Rams, have been anchors on a surprising defense.

With three starters out on the offensive line, Week 1 backups Yosh Nijman and Jon Runyan, at left tackle and left guard, respectively, have helped the offense go.

“We’ve got some superstars and we’ve got some role guys, but everybody’s together and everybody’s equal,” offensive coordinator Nathaniel Hackett said. “Just watching them in the meetings, how they talk, it’s just this culture that since Matt’s got here that he’s built. It just shows. It gets stronger and stronger every single year. I think that’s something special.”

Last season, Green Bay dominated most weeks because of its success in the red zone. Offensively, its 80.0 percent touchdown rate was the best since the NFL began tracking that stat in 1999.

Defensively, it finished seventh in opponent touchdown percentage. This year, the Packers, Las Vegas Raiders and winless Detroit Lions are the only teams in the bottom 10 of both categories.

Offensively, the Packers are 20th in yards per rushing attempt. Defensively, a unit that ranks fifth in points allowed gave up five completions of 20-plus yards in a loss at Minnesota two weeks ago and a pair of long touchdowns in the win against the Rams last week.

So, there’s work to be done.

“We can see where we are right now — but that’s right now,” Adams said. “You’ve got to prove it every week in this league. The teams that don’t believe that, they get humbled quick.”

After the bye, the Packers will begin a five-game push for the postseason and home-field advantage throughout the NFC playoffs — they trail Arizona by a half-game — in hopes of returning to the Super Bowl after falling a game short in recent years. Three of the five games will be at home, including on a Sunday night against Chicago coming out of the bye. They face only one team with a winning record, though that’s at Baltimore a week later.

There’s a lot at stake for the Packers, who are 5-0 at home and 4-3 on the road. There’s no guarantee Rodgers will be back for the 2022 season. And even if he is, he’d likely be surrounded by a vastly different supporting cast with Adams set to be a free agent and the team about $46 million over next year’s projected salary cap.

That reality isn’t at the forefront of LaFleur’s thoughts. Rather, it’s figuring out how to push this team over the finish line.

“We have to continue to work because there’s areas of improvement in all three phases where we know we can get better,” he said. “But that’s exciting. We know that there’s a lot of work, a lot of ball out in front of us and we’ve got to attack each day.”