Panthers to attack with McCaffrey, not worry about injuries 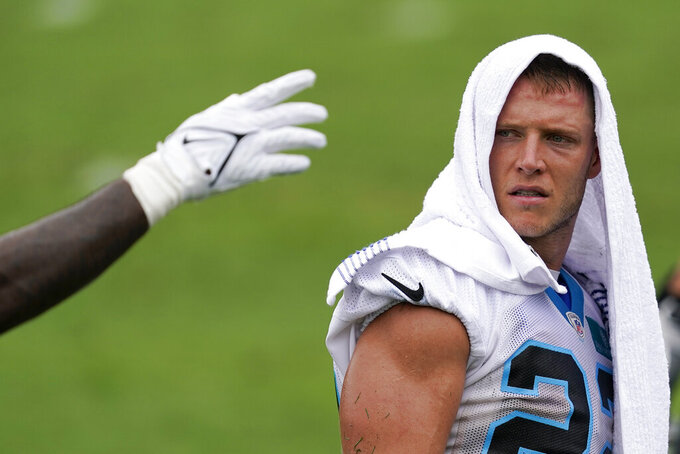 SPARTANBURG, S.C. (AP) — The Carolina Panthers aren’t planning to change their approach with Christian McCaffrey, even though the star running back has missed 23 of the last 33 regular-season games due to injuries.

It’s full speed ahead when it comes to McCaffrey this season.

“I’m not spending my time worrying about, ‘hey, will Christian get hurt?’” Panthers coach Matt Rhule said. “We are thinking about Christian in one way only — and that’s attack.”

That’s one of the reasons the Panthers signed free agent D’Onta Foreman from the Tennessee Titans to given them added depth in the backfield to go along with Chuba Hubbard.

“He plays a high-contact, high-percentage-of-injury position,” Rhule said. “We’re going to put him out there and play him. We want to have all of our best players for as long as possible.”

McCaffrey averaged nearly 30 touches per game through the first two games of last season before going down with a hamstring injury in a Week 3 Thursday night game against the Houston Texans. His role was reduced when he returned for four games in November, averaging 17 touches per game.

Rhule said it's still too early to know how many touches he anticipates McCaffrey getting this season, but it's clear he has big expectations for the former first-round draft pick. He adds, he wants to help him become “the best running back in the National Football League.”

McCaffrey should benefit from a significantly upgraded offensive line.

The Panthers added veteran interior linemen Austin Corbett from the Rams and Bradley Bozeman from the Ravens in free agency and selected left tackle Ickey Ekwonu from North Carolina State with the No. 6 pick in the NFL draft.

When McCaffrey has been healthy, he's been productive.

He’s accumulated 6,602 yards from scrimmage in five seasons with 47 combined touchdowns. In 2019, he became just the third player in NFL history to record 1,000 yards rushing and receiving, joining Marshall Faulk and Roger Craig in that elite group.

Since then, he's struggled with a variety of injuries to his shoulder, hamstring and ankle and the Panthers have taken some criticism for overusing him.

The injuries McCaffrey has sustained aren't because of a lack of conditioning. Rhule views McCaffrey's work ethic and preparation in the two seasons he's worked with him as second to none.

The running back said some of the injuries have been out of his control.

“I had a couple 300-pound guys fall on my ankle while I was already down,” McCaffrey said. "... I would love to know if there is a drill someone has got out there to prevent that from happening, because I would do that every day.”

McCaffrey has tried to tone down his conditioning this offseason, allowing his body more time to rest.

He's also contacted several former NFL running backs, including Faulk, about how to increase his longevity in the league.

“If I’ve learned anything in terms of techniques, it’s just not overdoing it,” McCaffrey said. "I think that has been my issue — overdoing it sometimes. But you can’t prevent everything. Football is a tough business and a tough sport.”

The Panthers have tried to do their part, resting McCaffrey for three of the team's 12 practices at training camp. They're likely to hold him out of all preseason games — just as they did a year ago — and there are discussions about limiting his workload in practice during the regular season.

McCaffrey's teammates just want him on the field, saying he makes them a different team.

“Defenses have to account for him wherever he’s at, whether out wide, inside, in the backfield — it just opens up all of these 1-on-1′s out there on the field," wide receiver DJ Moore said. "So having him just opens up everything.”

New Panthers quarterback Baker Mayfield had his first chance to get to know McCaffrey the last two weeks and walked away impressed. He called McCaffrey explosive, adding he has a tremendous knowledge of the game and recognition of defenses.

“And when you get him out on a route, just understanding leverage and coverages and how to get open — that’s an ability that you either have or you don’t,” Mayfield said. "He has a pretty special talent to be really friendly in the passing game for us.”

NOTES: Rhule hasn't determined who'll start at quarterback for the preseason opener against Washington on Saturday night, but expects Mayfield and Sam Darnold will play. ... Starting TE Ian Thomas will miss a couple of weeks with a rib injury. ... Wide receiver C.J. Saunders will miss 3-4 weeks with a quadriceps injury. ... The Panthers wrapped up camp at Wofford College on Wednesday.