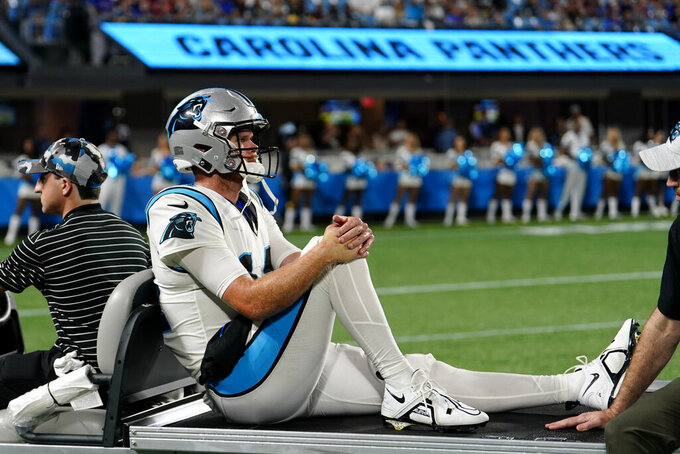 Carolina Panthers quarterback Sam Darnold leaves the field on a cart after getting injured during the second half of an NFL preseason football game against the Buffalo Bills on Friday, Aug. 26, 2022, in Charlotte, N.C. (AP Photo/Jacob Kupferman)

Darnold has a high ankle sprain, which is normally a four-to-six week injury. But Rhule said doctors haven't determined how much time he'll miss, adding that putting him on short-term injured reserve is a possibility.

The Panthers will enter the season with Baker Mayfield as their starter and P.J. Walker as his backup.

“We're not sure of the exact length of that injury,” Rhule said Saturday on a videoconference call. “We sent those images to a specialist to gauge it, but it does look like a significant injury that could take some time.”

Gonzalez’s injury appears even worse, and there is a possibility it could be season-ending. He will see a specialist to determine the degree of injury.

Rhule wouldn't specify what Gonzalez did to his groin while practicing kicks into the net on the sideline. But he said the Panthers will be looking to sign a kicker before the Sept. 11 regular-season opener against the Cleveland Browns.

“We are bringing guys in and figuring out our options,” Rhule said.

Gonzalez finished last season 20 of 22 on field goals after joining the Panthers in Week 2 of the regular season and making 22 of 23 extra points. The Panthers re-signed Gonzalez to a two-year, $4.5 million contract after he made his final 17 field goals last season.

Rhule said fullback Gio Ricci was getting an MRI on his groin, but said it doesn't appear to be as significant as the injuries to Darnold and Gonzalez. Tight end Ian Thomas and center Bradley Bozeman are expected to return from injuries next week and play in the season opener against the Browns.