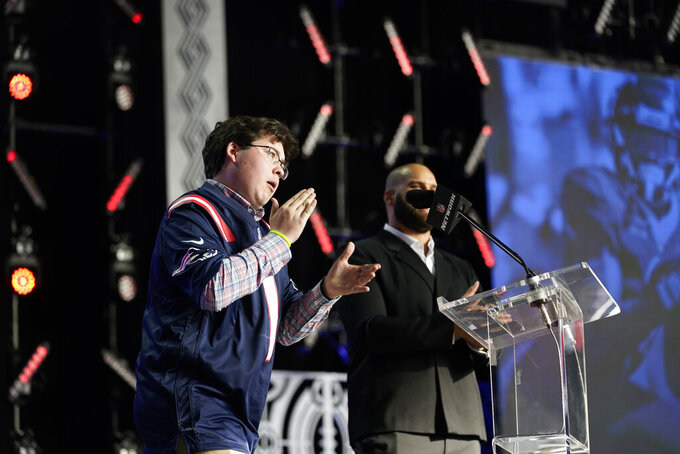 FOXBOROUGH, Mass. (AP) — The Patriots made a move to secure another weapon for second-year quarterback Mac Jones and addressed a hole in their secondary, trading up to select Baylor receiver Tyquan Thornton and adding Houston cornerback Marcus Jones on Day 2 of the NFL draft on Friday night.

New England traded its second-round pick (54th overall) and fifth-round pick (158th overall) to Kansas City in exchange for the 50th pick and used it on the 6-foot-2, 181-pound Thornton. Massachusetts native Ben Lepper, a Make-A-Wish child who has overcome leukemia, announced the pick alongside Patriots defensive tackle Lawrence Guy.

It marked the Patriots' second straight offensive pick after taking offensive lineman Cole Strange in the first round on Thursday. They then turned to defense, grabbing the versatile Jones with the 85th overall pick in the third round.

Patriots director of player personnel Matt Groh said he believes the team has achieved its goal of getting younger, faster and tougher over the past two days.

“To be able to get some toughness and athleticism on the first night. And I think the other two guys — Tyquan Thornton and Marcus Jones — they’re certainly tough guys, too. But at their positions — the skill positions — they are fast,” Groh said.

Thornton feels like his pedigree at Baylor fits right in with the culture of the Patriots, whom he visited during the draft process.

“I’m coming from a program like Baylor University where we stay true to the process. The process is all we know," he said. "You gotta know your job, you gotta do your job at a high level. I feel like that’s something that I did the four years I was at Baylor. I’m ready to get there and pound the rock.”

Thornton was a second-team All-Big 12 pick as a senior in 2021 and was the Bears’ leading receiver, catching 62 passes for 948 yards and 10 touchdowns in 14 starts.

That kind of production is needed in a Patriots receiving corps that had just one receiver (Kendrick Bourne) who caught at least five TDs and only two (Bourne and Jakobi Meyers) who produced at least 500 yards receiving in 2021.

While Thornton doesn't fit the mold of the kind of receiver the Patriots have drafted during coach Bill Belichick's tenure, Groh said he offers a lot more than just speed at the position.

In addition to tallying five INTs last season for the Cougars, Jones also had four special team touchdowns, returning two kickoffs and two punts for scores. It earned him first-team AP All-American honors as a returner. Though just 5-foot-8 and 174 pounds, he has lots of experience as a slot defender and played in a lot of nickel situations in college.

He said he's entering the NFL with an open mindset regarding how he's utilized.

“However I could help the team I was always down for it," Jones said.

He is currently recovering from surgery on both shoulders, but said his rehab is progressing.

“My shoulders are doing very well," he said. "Doing what I can to be fully healed ... making sure I’m feeling conditioned and worked out.” He said he expects to be ready by the start of training camp.

Thornton was one of the fastest receivers to run the 40-yard dash at the NFL combine, clocking in at 4.28 seconds. He said he played both in the slot and the outside at Baylor and feels comfortable being utilized in different ways.

Asked who he modeled his game after, he pointed to Raiders receiver Davante Adams.

“I love how he creates separation at the top of the route, and line of scrimmage as well," Thornton said. "I’ve tried to mimic that with my releases and route running, while adding speed to it.”