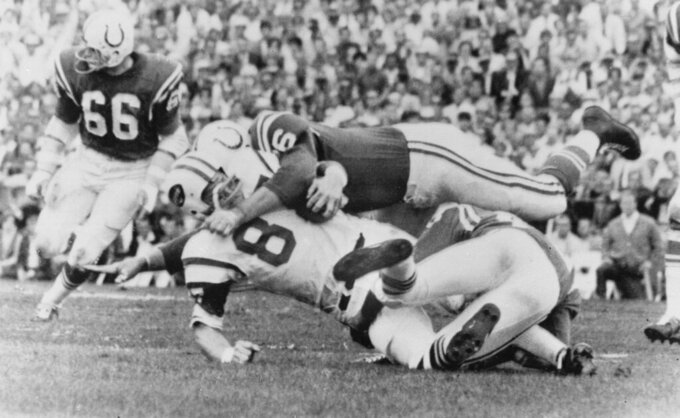 File-This Jan. 12, 1969 file photo shows New York Jets Pete Lammons (87) getting tackled during the Super Bowl in Miami, Fla. Lammons, a tight end on the New York Jets' Super Bowl-winning team in 1969, has died in a boating accident. He was 77. Major League Fishing announced in a statement Friday, April 30, 2021, that Lammons was participating in a fishing event on the Sam Rayburn Reservoir in Texas on Thursday morning when he slipped while boarding a boat, fell into the water, and drowned. (AP Photo/File)

BROOKELAND, Texas (AP) — Pete Lammons, a tight end on the New York Jets' Super Bowl-winning team in 1969, died by drowning after he fell off a fishing boat, authorities said. He was 77.

Major League Fishing announced in a statement posted on its website Friday that Lammons was participating in an event on the Sam Rayburn Reservoir on Thursday morning when he slipped from his boat and fell into the water.

The Texas Parks and Wildlife Department confirmed Lammons’ identity. An autopsy was ordered.

In its statement, MLF said San Augustine County Game Warden Travis Fountain responded to a call about an angler who had fallen overboard at around 10:05 a.m. Rescue attempts were unsuccessful and Lammons' body was later recovered using sonar.

Lammons was competing in his 57th career tournament in the MLF Toyota Series.

Lammons, a native of Jacksonville, Texas, who was living in Houston, was drafted by the Jets in the eighth round of the 1966 AFL draft out of Texas — after helping lead the Longhorns to the national championship in 1963. He was also drafted by the NFL's Cleveland Browns in 1966, but opted to play for the Jets.

Lammons played six seasons in New York and helped deliver the franchise its first and still only Super Bowl title while catching two passes from Joe Namath for 13 yards in the upset win over the Baltimore Colts in 1969.

His best personal season came in 1967, when he had a career-best 45 catches and was selected to the AFL All-Star team.

Lammons played his final NFL season in 1972 with Green Bay. He finished with 185 career receptions for 2,364 yards and 14 touchdowns in seven seasons.

According to a story posted on the Jets' website, Lammons got into real estate after his playing career and partnered with former teammate Jim Hudson in the thoroughbred racing business.