Quarantining Saleh hopes to rejoin Jets in next few days 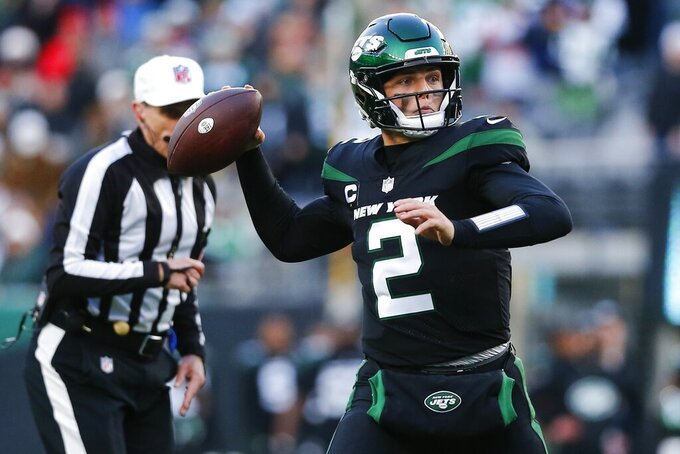 New York Jets quarterback Zach Wilson (2) throws a pass for a touchdown to Conor McDermott during the second half of an NFL football game against the Jacksonville Jaguars Sunday, Dec. 26, 2021, in East Rutherford, N.J. (AP Photo/John Munson)

NEW YORK (AP) — Robert Saleh couldn't be on the sideline or at the stadium because of COVID-19 when his New York Jets took the field Sunday, so he audibled with a fun game plan.

The still-quarantining coach would watch his squad play Jacksonville from the hotel room in New Jersey that has been his home for nearly a week. And he'd get a buddy to join him on FaceTime so they could view together.

So, Green Bay Packers coach Matt LaFleur — whose Packers beat the Browns on Christmas — spent a few hours keeping Saleh company. But there was one problem.

“He was like 5 seconds ahead of me,” Saleh said of LaFleur's TV feed. “I'm yelling at him to stop telling me what's happening.”

When big offensive lineman Conor McDermott stretched out to snare a 1-yard touchdown pass from Zach Wilson, in the fourth quarter, LaFleur let out a loud, “Ohhh!” So Saleh knew something wild was going on.

“When he caught it, I was just laughing and like, ‘Oh, my God, I can’t believe that happened,” a smiling Saleh said. “It was a really cool moment.”

That unlikely catch by McDermott — the first TD by a Jets O-lineman since Jumbo Elliott's grab in the “Monday Night Miracle” against Miami in 2000 — was just one of a few highlights in a 26-21 victory that featured some headline-worthy story lines.

The first was Saleh being sidelined and replaced by tight ends coach Ron Middleton, who received a game ball from owner Woody Johnson after the win.

“It was frustrating,” Saleh said of not being able to coach. “The guys played their absolute butts off.”

Saleh said he's feeling “great” and hopes to return to the team in the next day or two. He said the Jets should also get several players back after having their COVID-19 list swelled last week to as many as 20 before kickoff.

Another key story line was the showdown between Wilson and Trevor Lawrence, the fourth matchup in NFL history of rookie quarterbacks who were drafted with the first two picks.

Wilson's passing numbers were hardly gaudy — 14 of 22 for 102 yards and the TD to McDermott — but it was the third straight game in which the No. 2 overall pick didn't throw an interception. He also looked extremely comfortable running Mike LaFleur's offense, saying he was playing “free” on Sunday.

Saleh raved about Wilson's 12-yard toss to Braxton Berrios on third-and-9 late in the game that helped set up a field goal.

“I'll argue with (Mike) LaFleur that that was probably the best throw he's made all season,” Saleh said. “I mean, it was awesome. It was a clutch throw, clutch catch.”

Wilson also set a Jets record for a quarterback with 91 yards rushing, highlighted by a 52-yard touchdown — the longest run by a QB in franchise history.

“I just felt like I was having fun out there,” Wilson said, “and was just able to play ball like I have my whole life.”

And that's the most promising sign of all for the 4-11 Jets with two games remaining.

The running game kept pounding from start to finish, ending up with 273 yards rushing. That's the most by any NFL team this season, and the most by the Jets since 2018.

The Jets are still struggling on third downs, going 4 for 12 in those situations against the Jaguars. Their 37.4% conversion average on the season ranks them near the bottom of the NFL, and their 27.03% average in the last three games is better than only New England (24.32%).

RB Michael Carter. The fourth-round pick has played himself into more carries in the Jets' running back rotation, especially after Sunday's breakout performance. The rookie finished with 118 yards on 16 carries — an average of 7.4 yards — along with two catches.

WR Denzel Mims. With Jamison Crowder out with a calf injury and Elijah Moore sidelined by COVID-19, the 2020 second-round pick again failed to make an impact. Mims played 32 snaps and had no catches and just two targets, including one on which he would've been ineligible because he stepped outside the back of the end zone. He has just eight catches for 133 yards and no scores this season.

“Denzel's going to have an opportunity,” Saleh said. “No one's quitting on him. We're going to continue to grind and try to put him in the best position possible to try to help this team. ... His story isn't even close to being written yet."

3 for 5 — Middleton showed aggressiveness Sunday, going for it on fourth down five times against Jacksonville, including three times on one drive. It marked the Jets' most attempted fourth-down conversions in a game since 2000.

The Jets play their home finale Sunday against Tom Brady and the defending Super Bowl champion Tampa Bay Buccaneers. Brady is 30-8 against the Jets in his career, but this is the first time he's facing them not as a member of the Patriots.