Raiders in danger of another spiral after rout by Chiefs 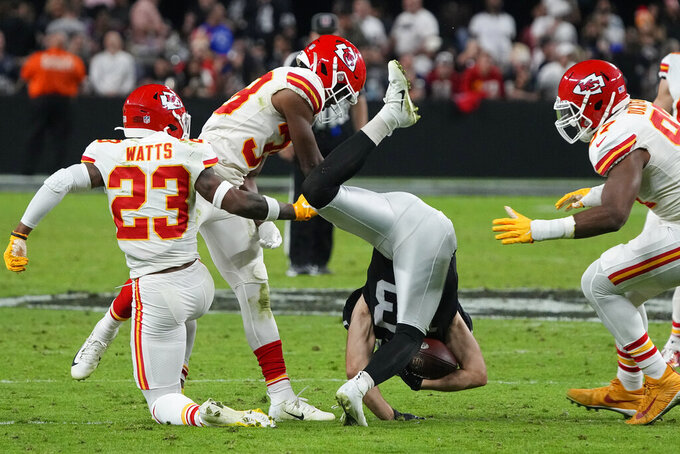 LAS VEGAS (AP) — The pattern to the season has become all too familiar for the Raiders: A promising start to the year followed by a second-half collapse that leaves them outside the playoffs.

That's how both the 2019 and 2020 seasons went for the Raiders, and this season is in danger of heading that direction again for Las Vegas following a 41-14 loss to the Kansas City Chiefs on Sunday night.

“I really believe that this group is just different,” quarterback Derek Carr said. "I’m around them every day, it's just a different group.”

It hasn't looked that way the past two weeks as a team that went into the bye with a 5-2 record following wins in the first two games under interim coach Rich Bisaccia has now lost back-to-back games to the New York Giants and Kansas City. Both exposed serious issues for Las Vegas (5-4).

That's what happened the past two years when the Raiders started 6-4 and 6-3, but failed to finish with a winning record either time.

Las Vegas once again got off to a sluggish start against the Chiefs, falling behind by at least 10 points in the first half for the fifth time in nine games this season. The Raiders managed to climb out of those holes the first two times to beat Baltimore and Miami in overtime, but haven't the past three times.

“It’s a hard way to do it,” Carr said about the early deficits. "I think if we can just stay on the field early and keep our defense on the sideline, and that’s what we can do as an offense to help them out.”

The offense has been held to 16 points or fewer in four of the past six games and has looked much less dynamic the past two games since deep threat Henry Ruggs III was released after being charged with felonies in a DUI that killed a 23-year-old woman.

The defense that showed progress early in the year under first-year coordinator Gus Bradley was picked apart by Kansas City and didn't force a punt or turnover on the final nine drives.

But the Raiders are still in reach of a playoff spot if they can solve these problems quickly.

“I think we’re just a better team, honestly," Carr said. “We have better players. Now, that doesn’t result in wins. I’ve been on teams that were really talented, that underperformed. I just really believe in our group, it’s a close group.”

Opening drive of second half. The Raiders moved the ball with ease on the opening drive of the second half, going 75 yards in five plays capped by a 37-yard TD pass to Bryan Edwards. Carr was 3 for 3 for 64 yards on the drive and pushed the ball downfield twice after not doing it at all in the first half.

Johnathan Abram in coverage. The Chiefs repeatedly targeted the Las Vegas safety to great success all night. Abram was targeted in pass coverage nine times and allowed a completion each time, according to Pro Football Focus. Kansas City gained 127 yards on those throws and had two TDs, including backup running back Darrel Williams beating him on a 38-yard TD catch.

Hunter Renfrow. The slot receiver has been the most consistent part of the offense. He had seven catches for 46 yards and scored Las Vegas' first TD of the game. Renfrow leads the team with four TD catches in the red zone.

DeSean Jackson. It was an inauspicious debut for the Raiders' new deep threat. He was targeted just once and came down with a 38-yard catch. But Jackson was hit from behind and lost a fumble on the play with the Raiders in position to cut into a 10-point deficit in the third quarter.

FB Alec Ingold tore his ACL on punt coverage in the first half and will miss the rest of the season. ... Third-down back Jalen Richard injured his ribs on a kick return in the second half and is day to day.

The Raiders host Cincinnati, which comes off a bye, on Sunday.