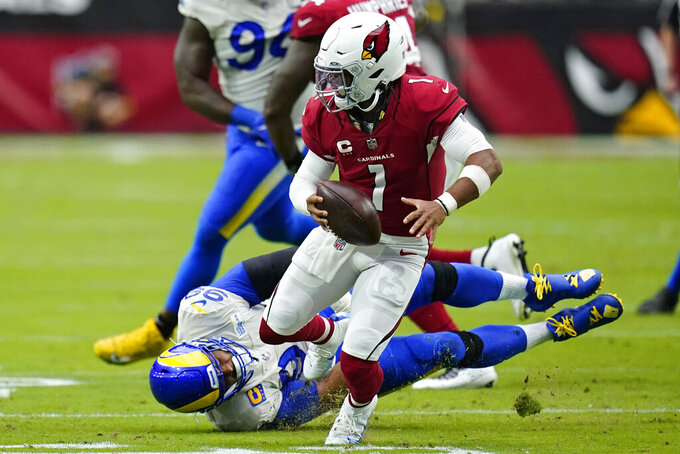 SANTA CLARA, Calif. (AP) — The stakes will be far lower when the Los Angeles Rams visit the San Francisco 49ers for the third meeting between the teams this calendar year.

The intensity is always high when these NFC West rivals meet.

Ever since good friends Sean McVay and Kyle Shanahan took over as coaches in Los Angeles and San Francisco in 2017, the franchises have used each other as measuring sticks.

The Rams have had better team success with four playoff berths, two Super Bowl appearances and the title last season.

The Niners have had the edge in the head-to-head battle, winning the past six regular-season matchups, including a Week 18 game last January that got them into the playoffs.

But the Rams got their revenge a few weeks later when they beat San Francisco 20-17 in the NFC title game on the way to their Super Bowl victory.

“We could talk about all those different games, but I think at the end of the day what it boils down to is they’ve played well, they’ve made the plays in crunch time,” McVay said.

"I think the ultimate thing that’s really important for us is each game is its own separate entity. ... But we know that this game is going to be different than the other ones. We’ve got to be able to show up, play well in that three-hour window. That’s what our focus and concentration will be solely focused on. No different than when we had to play them for the third time last year.”

Garoppolo's first start after Trey Lance went down with a season-ending ankle injury for San Francisco turned out to be a dud. Instead of building off a promising relief appearance in Week 2, Garoppolo looked rusty after no offseason work and showed the flaws that led the Niners to make the big move to acquire Lance last season.

He missed on a few chances at big plays in the first half, then turned it over twice in the second half, as well as stepping out of the end zone for a safety in the 11-10 loss to Denver.

The Rams are averaging a measly 3.4 yards per carry while posting the NFL’s third-lowest rushing average at 72.3 yards per game, easily the lowest of McVay’s six seasons. But even with Cam Akers and Darrell Henderson struggling, McVay has found other ways to use the traditional elements of the running game. McVay called a beautiful jet-sweep TD by Cooper Kupp last week, and he repeatedly has lined up second-year receiver Ben Skowronek as a fullback in an offense that usually doesn’t have one.

Trying to neutralize Aaron Donald is a tough task in the best of situations. The Niners will need to do it on Monday night without their best offensive lineman. All-Pro left tackle Trent Williams is out with a high ankle sprain and will likely be replaced by Colton McKivitz.

San Francisco also has been using a brand new interior of the line with guards Aaron Banks and Spencer Burford, and center Jake Brendel, who will have their hands full with Donald, who had his 100th career sack last week.

Donald has one sack in his past five games against San Francisco after having 10 1/2 the previous six meetings.

With Allen Robinson struggling to mesh with Stafford and the Rams’ passing offense, Kupp has carried even more of the offensive load than last season in the absence of Robert Woods and Odell Beckham Jr. The Offensive Player of the Year is averaging a modest 51 yards per game in his seven career meetings with the 49ers, but he also tore up San Francisco with 11 catches for 142 yards and two TDs in the conference title game.