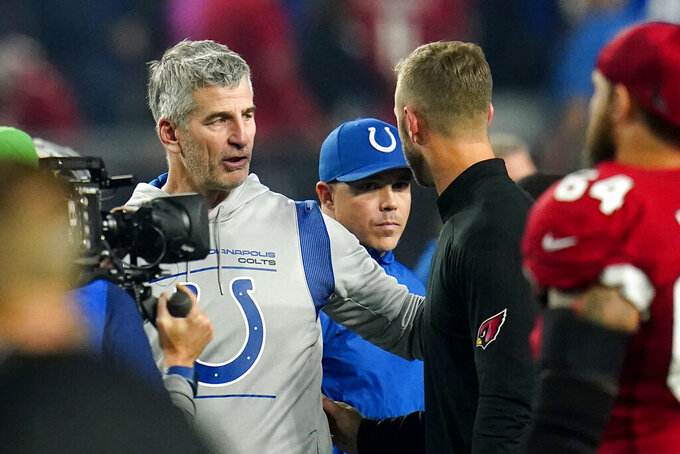 He's not even sure who else could be cleared by the medical staff if they're activated from the reserve/COVID-19 list.

All the uncertainty has left the Colts in a bind. Less than 24 hours after NFL officials announced a reduction in how much time vaccinated or unvaccinated players must sit out if they test positive for the virus and remain asymptomatic, Indy activated five players including offensive guards Quenton Nelson and Mark Glowinski. More players could join them on the practice field in the next few days.

Now Reich is installing contingency game plans as he waits to see who might be available against Las Vegas.

“His fifth day would be Sunday and in theory would be available for the game — if he clears," Reich said, referring to Wentz before Wednesday's practice. “In the meantime, he'll be in meetings virtual, preparing so if he does clear, he can play.. At this point, Sam (Ehlinger) is our starter. We’ll proceed accordingly with him as our starter, and we’ll adapt and adjust as needed and as warranted."

This is certainly not how Indy envisioned preparing for a potential playoff-clinching game. But it's better than the alternative after the virus hit Indy hard over the past week.

Right tackle Braden Smith and four others players were added to the list Monday, with the biggest blow coming Tuesday when Colts officials announced Wentz also was out.

Initially, it appeared the Colts could be missing at least eight starters against the Raiders.

Instead, after league officials announced Tuesday evening they had reached agreement with the NFLPA on following the CDC's revised quarantine guidelines, the decision allowed players previously required to sit out 10 days to come back as soon as five. Suddenly Reich was drafting an addendum to his already revised script.

“I’d say 20, 25% of it is different," Reich said when asked to estimate what percentage of play calls might change based on Indy's quarterback. “The core of it is we're pretty good with either guy. Unlike Week 3 at Tennessee, Carson had barely even practiced at that point, but now he’s practiced the whole year. So if he’s able to get back and get ready we feel like we’re in a much better spot."

The Colts are making other changes, too.

All meetings would be held virtually this week, and in an effort to reduce the time spent at team headquarters, walk-throughs and practices will be conducted simultaneously. Usually, Indy does walk-throughs in the morning and practices in the afternoon.

Reich also acknowledged chatting recently with last year's starter, Philip Rivers, and said he discussed the Colts “situation,” but there was nothing to report.

What else will be different?

Ehlinger will take first-team snaps all week because Wentz won't be eligible to return until at least Sunday. If Ehlinger does make his first NFL start, Indy could lean even more heavily on the league's No. 2 rushing offense.

The former University of Texas star has appeared in three games this season though he's still not thrown a pass and has had little chance to work on his timing with Indy's top receivers. But two weeks ago, Wentz went 5 of 12 for 57 yards with one touchdown and one interception against New England. The Colts still won.

Last week, with three of the five starting offensive linemen sitting out and the fourth leaving in the first quarter, they beat the Cardinals.

And if there's one thing Indy's rookie quarterback is familiar with, it's running Reich's run-pass option plays.

“I'm very comfortable running the RPOs in this system. I've been running them for a long time," Ehlinger said. “It definitely places a heavy stress on the defense, especially when you have the running backs we do. If you miss one tackle, they’re gone."

Of course everything could change in the blink of an eye. Whatever happens, though, Reich intends to have a plan for it.

“You don’t script it like this, but it’s a tremendous opportunity for Sam," Reich said. “Everyone’s always being evaluated, so these are gold bars for Sam. Every rep he gets with the first team is important because there's probably going to come a time when he has to step up in that role."