Ryan and Reich could be a winning match in Indianapolis 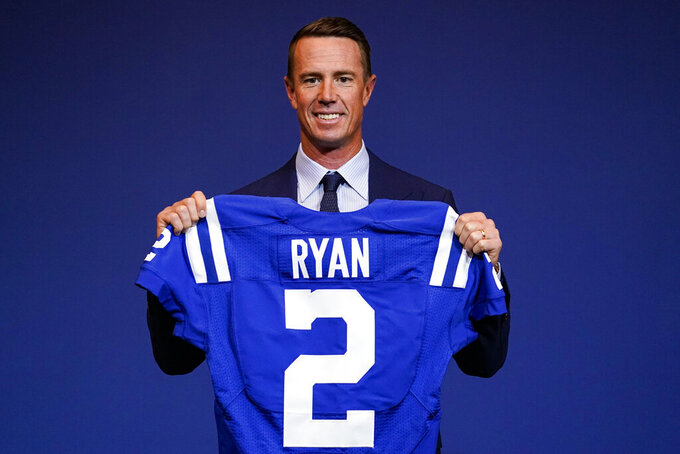 PALM BEACH, Fla. (AP) — For a few weeks, the Indianapolis Colts had a huge void at quarterback. Then the Deshaun Watson carousel began spinning, and soon enough, Matt Ryan was available.

The Colts' game of musical chairs at the position has been going on for too long, from Andrew Luck's injuries and subsequent retirement through Jacoby Brissett, Philip Rivers and Carson Wentz. Ryan seems to be the right guy to settle in for a while.

“I don't see any diminishing play or skills,” Reich said of the 36-year-old Ryan, who was acquired from Atlanta after the Falcons' failed bid to trade for Watson, who went from Houston to Cleveland.

“As soon as he became a possibility ... we were very happy that Matt became available. “That’s a credit to (general manager) Chris (Ballard) and his leadership. We were poised. We weren’t going to panic.”

Once the pieces began to fall together elsewhere, the Colts, who had traded Wentz to Washington earlier in March, asked permission from Atlanta to talk with Ryan, the 2016 league MVP. There was a virtual meeting in which Ryan, Reich and the Colts' staff clicked immediately.

“I had cutups made of a lot of our offensive plays,” Reich said. “Just kind of walking through some of your plays, talking offensive football, wanting Matt to envision himself in our offense and some of things that we could do.

“It was apparent very quickly that there was an instant connection in every way. Personally, but also football-wise. The way we think about the game.”

As if there's not enough for folks to do in Las Vegas, the NFL will offer a main source of entertainment late next month during its draft.

The actual selections will begin Thursday, April 28 with the first round, followed the next day by the second and third rounds, and the final four rounds on April 30. Running concurrently will be the NFL Draft Experience, also on The Strip, located behind the High Roller and the LINQ hotels, adjacent to Caesars Forum.

Construction on the theater where the drafting will occur begins Friday.

“We were on the precipice two years ago and then the world shut down,” says Peter O'Reilly, the NFL's executive vice president who handles league events, noting that the virtual draft held in 2020 originally was scheduled for Las Vegas. “We're in a very different world today than we were for the virtual draft. The Los Angeles Super Bowl felt like we are fully back."

On Monday, the league launched NFL OnePass, where fans can download the app to play games at Draft Experience, receive digital content, and enter sweepstakes that include among the prizes a trip for two to the Super Bowl next February in Glendale, Arizona.

The experience itself will have immersive exhibits and a youth-focused Play 60 Zone. The three Vince Lombardi Trophies won by the Raiders will be on hand, as well as a display of Super Bowl rings. There will be opportunities for fans to do a 40-yard dash, and a vertical jump against NFL players on LED screens. A player autograph area also is included.

Each day at the conclusion of the draft will be free concerts in the theater where the actual draft will occur. Artists have yet to be announced.

“We take on the city as a character in the play, to imbed ourselves in the character of the city,” O'Reilly says of using iconic locations such as Caesars and the Bellagio's fountains as the backdrop for the draft. “First we have to get the core right, the selection process. And then we have this 'free festival,' the Draft Experience. It's like an oasis in our offseason.”

The Pro Football Hall of Fame is going back a few decades for its headline act at the Concert for Legends.

Journey will take the stage on Aug. 6, hours after the inductions of the class of 2002, which have been switched to a Saturday afternoon.

“Journey has been entertaining its fans for almost 50 years since the band’s founding, and we are thrilled to be working with Hall of Fame Village to bring these members of the Rock and Roll Hall of Fame to the Hall of Fame city,” said Jim Porter, president of the Pro Football Hall of Fame.

Formed in San Francisco in 1973, Journey is one of the most recognizable groups in rock and pop music, known for megahits “Don’t Stop Believin’,” “Separate Ways (Worlds Apart),” “Any Way You Want It,” “Faithfully,” and “Lights.”

The Detroit Lions will be the team in the spotlight during the preseason for HBO's “Hard Knocks” series.

The five-episode series will debut Aug. 9. It is the 17th edition of the Sports Emmy-winning series.

Camera crews will shoot most of the show at the Lions’ training camp in Allen Park, Michigan, and will chronicle coach Dan Campbell entering his second season in Detroit. The episodes will be narrated by Liev Schreiber, marking his 16th season with the show.

“We are excited about the opportunity to showcase the city of Detroit and the amazing culture we are building at the Lions,” said Lions president and CEO Rod Wood.

Cumulus Media’s Westwood One, the largest audio network in the nation, and the NFL extended and expanded their partnership Monday. The multi-year agreement was expected; Westwood One has been the official network partner of the NFL for more than three straight decades and 50 years overall.

Westwood One will continue to provide play-by-play coverage for games on Sunday, Monday and Thursday nights; Thanksgiving Day; select international games; and the entire postseason through the Super Bowl. The NFL on Westwood One reaches more than 56 million listeners each season.

Added to the package will be a digital platform element as well as availability of the prime-time broadcasts on the NFL app; expanded coverage of NFL Honors, the scouting combine, the draft, and the schedule release; and mechanisms toward creating new alternate game broadcasts.

“Audio is an important platform for the NFL, and Westwood One has a long history of delivering excellent game broadcasts and other content, said Brent Lawton, league vice president of media strategy and business development.