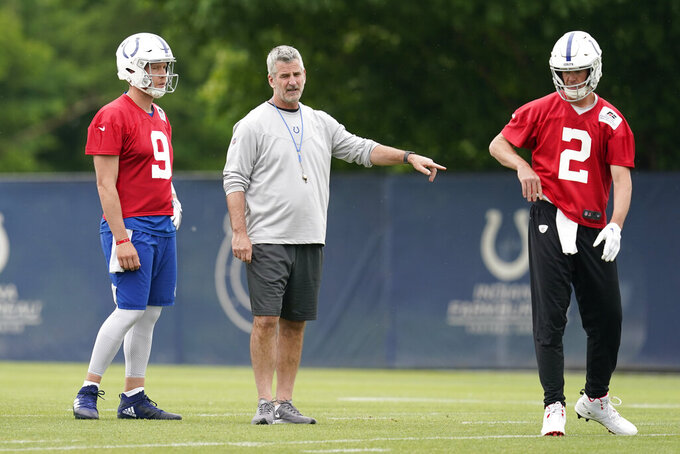 He helped fine-tune the playbook, broke down last season's game tapes and met with coaches and teammates. Only this time, he was working with a new team — the Indianapolis Colts.

On Thursday, the 37-year-old Ryan completed his first offseason workouts outside Atlanta by saying he felt more comfortable and confident about running coach Frank Reich's offense.

“I feel like personally like I'm a lot further along when it comes to terminology and understanding what we're trying to do offensively," Ryan said. "All in all, I think everyone's pleased with how the last few weeks have gone.”

For the 15-year veteran, this is a first.

While coaching changes forced Ryan to learn multiple offenses in Atlanta and the NFL's constantly changing rosters helped him break in dozens of teammates, Ryan has not been the new face of the locker room since the Falcons drafted him No. 3 overall in 2008.

Back then the former Boston College star was the hand-picked successor to Michael Vick and hyped as a future superstar.

Ryan didn't disappoint. He was the Offensive Rookie of the Year, the 2016 league MVP, a four-time Pro Bowler and the second quarterback to lead the Falcons to a Super Bowl. He left as the franchise's most successful and prolific quarterback.

Now he's starting over with another team seeking quarterback stability and, so far, it seems like a perfect match. He was sharp in practice.

“He did everything right," Reich said. "Great leadership, great play, great collaborating as an offensive staff with him to kind of work in some of the things we do that kind of suit him and his style. We got to learn a few things about him and pick his brain about things he did and the favorite things he did in Atlanta."

Indy believes Ryan can be at least a two-year solution after opening each of the past five seasons with a different starting quarterback. The streak will be extended to six Sept. 11 in Houston.

Indy thought it had a fix last year when they acquired Carson Wentz in a deal with Philadelphia. But after two straight losses to end the season cost the Colts a playoff spot, they sent Wentz to Washington despite having only two other quarterbacks on the roster, Sam Ehlinger and James Morgan, and no backup plan.

Two weeks later, everything changed when the Falcons opted to pursue then-Houston quarterback Deshaun Watson and general manager Chris Ballard inquired about Ryan. While the Watson deal fell through, Ryan's sudden availability for a third-round pick made it a no-brainer for Ballard.

The result: Ryan has been embraced by everyone, even those he's quizzed in the hallways.

“Love him," running back Nyheim Hines said last month. “He's kind of reminiscent of Philip (Rivers) with his command. He doesn’t know the playbook as well as Philip yet but just his detail, his leadership, him talking to us after every route, coming and talking to every guy. It’s great.”

Not everything went as smoothly as Ryan's transition.

League rushing champion Jonathan Taylor missed all three days of this week's mandatory minicamp for precautionary reasons and starting safety Khari Willis sat out with an excused absence for personal reasons. Pro Bowl cornerback Kenny Moore II got hurt on Tuesday and did not practice Wednesday or Thursday amid a continuing contract dispute.

The biggest question surrounded three-time All-Pro linebacker Darius Leonard who had back surgery Tuesday after having ankle surgery earlier this year. Leonard suggested in a Twitter post that the two injuries were connected.

“My conversation with the trainers was maybe some connection, but they are different injuries,” Reich said. "Is there some connection? Honestly, I didn’t go that far into it with them at the time, so I’ll need to talk to them to get further clarity of what level of connection, if any, there is.”

But all eyes were on Ryan, third-year receiver Michael Pittman Jr. and rookie Alec Pierce to see how they would fit.

Ryan had no complaints and neither did anyone else.

“You have to learn the offense, you have to know what you’re talking about. You have to be able to speak their language,” he said. “That’s the thing I said from the start is that you’ve got to help me here, too.”