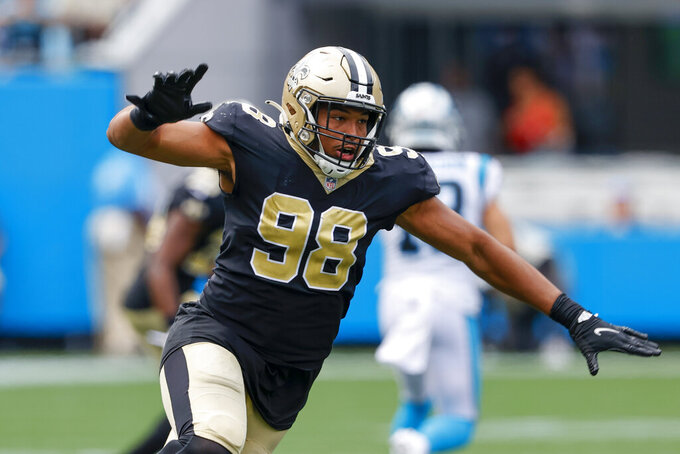 Yet he smiles easily and often, projecting a veteran's sort of confidence as he takes questions about expectations surrounding him.

“We’ve all got something to prove -- me especially,” Turner said. “Prove to myself that I am who I think I am.”

The 6-foot-6, 270-pound Turner -- who also played basketball in his youth and fondly recalls jumping over defenders to dunk on them – looks the part of an NFL defensive end.

Teammates and coaches say his natural ability is not in question. What remains to be seen is whether he’ll develop the requisite pass-rushing and run-stopping skills to thrive as a pro.

With the Saints, Turner could have a luxury some first-rounders to not. Coaches might not have to rush him into too many high-stakes snaps before he’s ready.

New Orleans has both incumbent starting defensive ends back from last season in Cameron Jordan and Marcus Davenport. If they remain healthy and productive, the Saints could limit Turner to rush schemes that best suit his strengths early on.

But Allen stressed that he doesn’t want Turner thinking too much about roles and expectations at this point.

“Here’s what I want him to do: I want him to come to work every single day and focus on that day and get himself better that day,” Allen said.

“He’s plenty talented enough. He's plenty athletic enough. He’s plenty smart enough. And now it’s just about going out and putting in the work and that takes time. We’ll give him time to get there,” Allen added. “Too many times we worry about what expectations are instead of what the task at hand is.”

Turner has only recently begun practicing again after working through injuries for much of the past year.

He missed several weeks of 2021 training camp with an undisclosed injury. He missed two early season games with a calf injury and then injured his shoulder in mid-season, needed surgery and spent the rest of the year on injured reserve.

In total, he played in five games, making one sack to go with three tackles for losses and three quarterback hits.

“I hadn’t been on grass since November,” Turner said after his first couple practices of training camp this week. “It feels really good, just to be back out there with the guys again, sweating, running around.”

Although Turner tore knee ligaments in high school, he made it through his standout college career at Houston relatively injury-free. That made the constant injuries of his rookie year in the NFL “really frustrating.”

“You live your whole life trying to get to this point, then it gets taken away like that,” he said. “Mentally, it was a pain. ... You get things going, then you have a setback. Get things going, setback. Then, boom, surgery.

“But it’s the nature of the game,” Turner added. “I’m going to try to bounce back and just be me.”

Turner said his goals include not just refining his pass rush but also being stronger against the run. And he speaks of “making a conscious effort to have a plan, rather than just be big, strong and fast.”

Notes: Tight end an utility player Taysom Hill missed practice. Allen said Hill was bother by a hit to his ribs and that he did not have any problems with his left foot, on which he had offseason surgery that kept him out of offseason practices ... The Saints announced that former right guard Jahri Evans and former NFL defensive lineman Ty Warren would serve as coaching interns during training camp as part of the NFL’s Bill Walsh Diversity Coaching Fellowship program. ... Cornerback Bryce Thompson was helped off the field with what Allen said were heat-related symptoms.