Schottenheimer enjoying view of Seahawks offense from up top 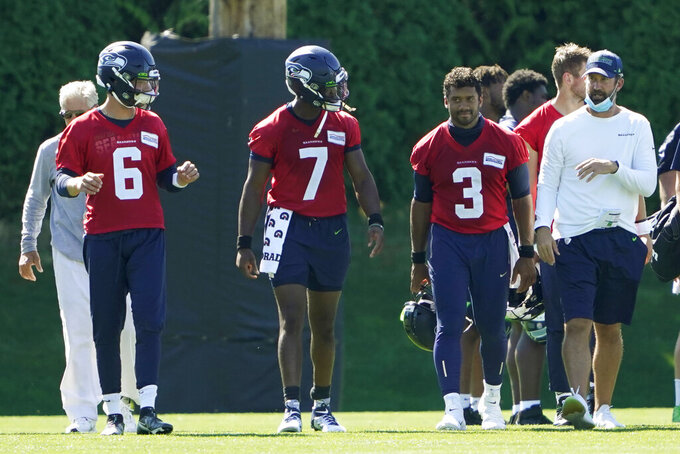 RENTON, Wash. (AP) — Brian Schottenheimer returned to his seat after halftime last Sunday night and found a gift waiting for him.

A hot dog. Which wasn’t as much of a treat as the cheesecake the week before in Atlanta.

“Somebody actually put a hot dog at halftime of our game here. Maybe it was you guys,” Schottenheimer joked with the media this week. “And I did not eat it until after the game was over. The hot dog was not as good as the cheesecake. The cheesecake was much, much better.”

Being tempted by snacks wasn’t an issue in previous seasons for Schottenheimer when he was firmly planted on Seattle Seahawks sideline.

Schottenheimer has moved upstairs to the press box to call Seattle’s offense from there. The idea came from coach Pete Carroll, who found great benefit from seeing the game from higher up when he went to San Francisco as a defensive coordinator in the 1990s.

“When I went up there, I kind of did it reluctantly because I love the game, want to be on the sidelines. That’s probably no surprise,” Carroll said. “When I went up there it was like a whole different world. It’s a whole different world sitting upstairs. Brian had been up years ago, quite a while ago, and so I just told him that's what I wanted him to do.”

Schottenheimer’s move may not be a direct correlation, but the results for the offense through two weeks can’t be disputed heading into Sunday’s game against Dallas.

The Seahawks have scored 38 and 35 points. Wilson has nine TD passes and the offense is averaging more than 400 yards per game.

Wilson said both options have their upsides, but he also sees the benefit in Schottenheimer having a broader view.

“It doesn’t bother me either way, honestly,” Wilson said, noting he still gets on the headset with Schottenheimer between possessions. “It’s coming through my ear most of the time, at least.”

What Schottenheimer has found to be the biggest benefit is having the full view of the field and an enhanced ability to decipher what opposing defenses might be doing to try to stop Wilson. It’s also allowed him to recognize down and distance situations quicker without those number needing to be relayed.

Schottenheimer also has more space to spread out his play sheets and his notes, especially at a time of social distancing.

“You see things so much better, so you’re able to really have a great feel for what’s going on during the game. Whereas sometimes you have to, when you’re on the field, you have to go back and look at the pictures to know what happened,” Schottenheimer said. “And then I think just the ability to have my notes and sit there and cross things off that I like, or even make notes for something I want to get to later in the game. So no negatives.”

NOTES: Seattle placed DE Rasheem Green on injured reserve Friday due to a neck stinger. Carroll said Green needs a few more weeks of recovery after being injured in Week 1, but the team is hopeful he’ll return. ... DE Benson Mayowa (groin) and CB Quinton Dunbar (knee) were listed as questionable for Sunday. Mayowa was a limited participant in practice Friday and has a chance to play, Carroll said. Dunbar did not practice, but Carroll said, “he looks like he’s ready to play.”