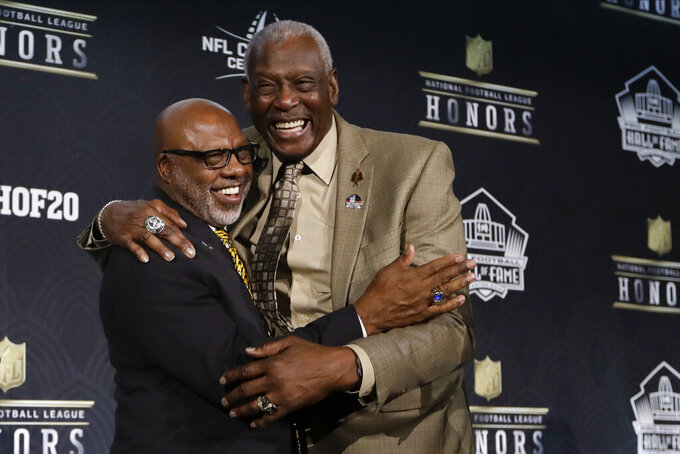 FILE - Hall of Fame Class of 2020 Donnie Shell, left, hugs Harold Carmichael at the NFL Honors football award show in Miami, in this Saturday, Feb. 1, 2020, file photo. “I was 190 pounds soaking wet,” Shell said with a laugh. Still, Pittsburgh Steelers scout Bill Nunn saw enough in the way Shell delivered hits — punishing opponents with little regard for his own well-being — to convince his bosses that Shell deserved an invitation to training camp in the summer of 1974. (AP Photo/Mark Humphrey, File) 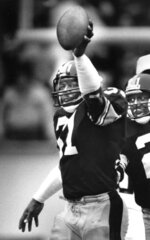 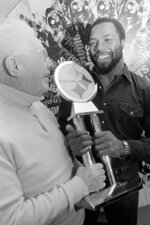 Still, Pittsburgh Steelers scout Bill Nunn saw enough in the way Shell delivered hits — punishing opponents with little regard for his own well-being — to convince his bosses that Shell deserved an invitation to training camp in the summer of 1974.

A chance is all Shell was guaranteed. So he made a promise to himself to arrive at Saint Vincent College in better shape than anyone else on the roster. Then fate intervened. The NFL Players Association went on strike for six weeks, giving rookies like Shell extra reps during the early days of camp.

It was all Shell needed to launch a career that nearly 50 years later landed him in the Hall of Fame. The hard-hitting cornerback won four Super Bowls during his 14 years in the NFL and next month will become the fifth — and most unlikely — member of the “Steel Curtain” defense to be enshrined in Canton.

The other four — lineman Joe Greene, linebackers Jack Ham and Jack Lambert and back Mel Blount — all arrived in Pittsburgh with a pedigree. Not Shell, who views his winding path to football immortality as a testament to what can happen when innate ability and a relentless belief in yourself collide.

“It just shows that no matter where you start or where you come in, what round you are in or where you played, backup or whatever, that you can be successful if you have the right attitude,” Shell said. "I knew I was going to separate myself through my conditioning and my physical play and also being a student of the game. A great example for young people to take, that when everybody counts you out, you’re not really out.”

“I kind of came in with my jaw set,” Shell said. “I knew by the time we put the pads on that I was going to have a chance to show them what I could do. I remember coach Perles saying, ‘Keep bringing Shell. Keep bringing Shell.’ I was coming up and hitting them."

So Shell did, even if not everyone was convinced. He remembers doing an interview during that first camp in which the reporter told him he was a “long shot.”

“That taught me one thing: You’ve got to go against the grain of what’s true,” Shell said. “(The reporter) stated a fact. He was right. There aren't a lot of undrafted guys that make it. But sometimes you’ve got to go against the grain. Don’t give up on your dreams. Because God created everybody and gave them different talents and abilities and don’t let those obstacles discourage you.”

Shell arrived in Pittsburgh when the Steelers were in the final steps of the building process coach Chuck Noll began when the team selected Greene with the fourth overall pick in 1969. Running back Franco Harris told Shell the team was heading to the Super Bowl in the '74 season.

“I said, ‘Yeah, all right,’” Shell said laughing. “I said, 'Y'all were pretty good. But the ship sinking on one end, the rookies are going to get you over the hump.'”

Shell might have been joking at the time, but his prescient words soon played out in reality. Shell and fellow rookies Lambert, Lynn Swann, John Stallworth and Mike Webster ushered in an unprecedented run of success. Pittsburgh won four Super Bowls over the next six years, with all five of them playing an integral role.

While Lambert and Webster reached the Hall of Fame shortly after retiring, with Swann and Stallworth getting there by the early 2000s, Shell didn't receive the call until being selected as part of the hall's centennial class in 2020.

Yet he didn't let years of disappointment define him. It's just another part of his journey.

“I learned a lot by waiting,” said Shell, who will turn 69 shortly after his enshrinement. “You grow in your faith. You grow in your patience. And you grow in your walk with the Lord. All those years, you had to continue to trust him. And you know, then you get to the place where you’re just content. If it happens, if it doesn't, I’m still OK. That was my attitude about it.”

It's a mindset that carried Shell from Whitmire, South Carolina (population 1,509) to a place alongside the greatest players in NFL history after 14 seasons, 201 games, 51 interceptions, five Pro Bowls and four Super Bowl rings.

Shell's evolution from undrafted nobody to mainstay for a dynasty is a testament to both his personal work ethic and the brilliance of the late Nunn, who scoured HBCUs for talent and himself will reach Canton as a contributor next month alongside one of the treasures he found along the way.

“Chuck Noll had that saying, ‘Whatever it takes’ and Donnie was kind of the definition of that,” Steelers president Art Rooney II said. “He would go on the field and do whatever was necessary. ... He was willing to make the kind of sacrifices to make the difference in the game.”