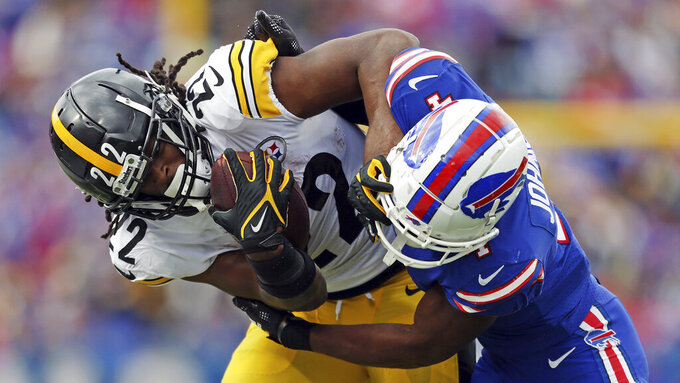 PITTSBURGH (AP) — Six years ago, near the end of a remarkable season in which he put together a University of Pittsburgh offense that broke school records and pulled off stunning — and high-scoring — upsets of Penn State and Clemson, Matt Canada wasn't exactly joking when he said his long-term goal was to make enough money to open a bar, preferably one with the beach nearby.

That alternate reality probably seems inviting at the moment for the embattled Pittsburgh Steelers offensive coordinator.

The Steelers (1-4) are reeling. The offense that features one starter over 26 — and that is little-used fullback Derek Watt — is sputtering. And the man tasked with putting it all together is under fire.

While coach Mike Tomlin stressed he still has confidence in Canada, who was promoted from quarterbacks coach to offensive coordinator in January 2021, he added confidence “means very little.”

“It's what's on tape (that matters),” Tomlin said.

And at the moment, what's on tape is nearly as ugly as what's on the scoreboard.

Pittsburgh is 30th in the league in points heading into Sunday's visit by Tom Brady and Tampa Bay (3-2). The next touchdown reception by a Steelers wide receiver will be the team's first of the season. And for all the poise rookie quarterback Kenny Pickett has shown in his first six quarters as a starter, Pittsburgh has reached the end zone just twice with the 20th overall pick in the draft under center, both of them short touchdown runs by Pickett in a loss to the New York Jets on Oct. 2.

A year after trying to find middle ground with Ben Roethlisberger in the veteran's final season, Canada was supposed to be able to fully install the offense, a scheme that helped Pitt average more than 40 points a game while he was working next door in 2016 in the facility the Steelers share with the Panthers.

Jet sweeps. Throwback passes to offensive linemen. Shovel passes. A never-ending series of shifts and motions designed to keep a defense off-balance and create splash plays down the field.

It hasn't exactly worked out that way. During a time of year when most offensive coordinators are expanding their playbook, the Steelers may be contracting theirs in an effort to simplify things for a 24-year-old first-year NFL quarterback and a set of skill position players long on talent and short on production.

“We have to score points, bottom line,” Canada said Thursday. “It doesn't matter how else you cut it, we've got to score more points.”

Particularly if Pittsburgh wants to take some of the pressure off an injury-ravaged defense that is banged up in the secondary and is essentially toothless without star outside linebacker T.J. Watt, who remains out indefinitely with a torn left pectoral injury.

Tomlin stressed he would leave “no stone unturned” in the search for answers. It's gotten to the point that a trio of rookies — undrafted running back Jaylen Warren, fourth-round pick Calvin Austin III and tight end Connor Heyward — could see significant snaps in place of more experienced teammates who are hurt or simply ineffective.

Warren has been one of the few bright spots after wresting the backup spot to Harris away from Benny Snell Jr. during training camp. The 5-foot-8 Warren isn't the physical marvel the 6-3 Harris is, yet he is making up for it by being decisive with the ball in his hands. Warren is averaging 4.9 yards per carry and is a willing blocker in the passing game.

Not bad for a player who watched the draft with his girlfriend last spring only to never hear his name called. The Steelers provided him with an opportunity, one that he seized with a tenacity that belies his size.

“The way I block isn't the safest way,” Warren said. “But yeah, I’m willing to put my all into something, you know, to help the team win.”

A mindset that would serve some of Warren's more accomplished teammates well. Canada believes his group is close to a breakout. He frequently puts his right thumb and index finger a few inches apart to symbolize the slim margin between success and failure.

“We all got to be that much better,” Canada said. “And that’s where we’re at. There’s no fear. There’s no doubt in where we're at with anybody. We just have to make those plays at the right time. We have to continue to coach them and push them. And we all got to be a little bit better to get ... the results that we all need and want.”

NOTES: CB Arthur Maulet, who criticized the seemingly unbothered demeanor of a few of his teammates following a 38-3 loss to Buffalo last week, said Thursday he was challenging them to "find your why, find why you love this game and use that for your motivation.”