Steelers hope offensive outburst is a sign of things to come 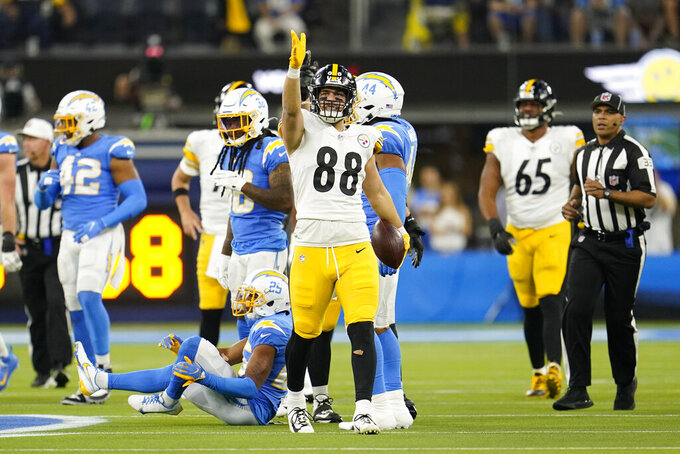 Pittsburgh Steelers tight end Pat Freiermuth (88) after a reception during the first half of an NFL football game against the Los Angeles Chargers Sunday, Nov. 21, 2021, in Inglewood, Calif. (AP Photo/Marcio Jose Sanchez)

Yes, scoring more than 30 points for the first time in a year last week against the Los Angeles Chargers was nice. And yes, having the offensive line be far enough along in its development to allow Roethlisberger to run the no-huddle confident he would be protected was a step in the right direction.

Still, Pittsburgh's 27-point eruption during a brilliant but ultimately futile fourth-quarter comeback did not change the result or the mostly blah three quarters that preceded it.

“I think we would take a win and a crappy offense over a great offense and not winning,” Roethlisberger said.

A formula that largely worked for Pittsburgh (5-4-1) during a five-game unbeaten streak that helped the Steelers emerge from the rubble of a 1-3 start.

Fueled largely by rookie running back Najee Harris and Roethlisberger's burgeoning trust in rookie tight end Pat Freiermuth, Pittsburgh puttered along by avoiding mistakes and letting the defense do its thing.

That may no longer be enough, at least with outside linebacker T.J. Watt's status uncertain as he battles hip and knee injuries heading into a visit to Cincinnati (6-4).

The Steelers allowed a staggering 533 yards to the Chargers and now face a team that pushed them around at times during a 24-10 win at Heinz Field in September.

A month ago, it appeared Pittsburgh might not be able to hang if the game turns into a shootout. The game in Los Angeles offered tangible proof it can. Perhaps most encouraging to Roethlisberger is the patience the offense showed after falling behind by 17. There was no panic, and it translated into a series of big plays.

“That’s what was big for us: we didn’t just abandon our offense right away,” Roethlisberger said. “We went to some different run options and things, but for the most part, we just stuck with what we wanted to do.”

Only a pass interference call on Roethlisberger's fourth-down throw to Chase Claypool extended the drive, giving Harris a chance to leap over the goal line for a touchdown.

Coach Mike Tomlin refused to lay blame on first-year offensive coordinator Matt Canada, pointing out he is plugged into the play-calling on both sides of the ball.

“Whatever unit’s on the field, I’m highly involved in and responsible for,” Tomlin said. “I do more than suggest (play calls). Just to be clear.”

Roethlisberger hasn't heard Tomlin's distinct voice come over the headset in his helmet, but he doesn't doubt Tomlin is weighing in.

“I’m sure he’s in Coach Canada and the other coaches’ ears saying something,” Roethlisberger said. "I’m used to that. I always remember when I first got here, seeing (former head coach Bill Cowher's) chin sticking out at (offensive coordinator Ken) Whisenhunt. “Run the ball!”

Something the Steelers believe they're far better at now than when they faced Cincinnati on Sept. 26. Harris managed just 40 yards on 14 carries, though he did catch 14 passes, a single-game record for a Pittsburgh running back.

Roethlisberger stressed the offense is improving, but cautioned that momentum can be snuffed out quickly in Cincinnati.

“Just because I think that we’re better doesn’t mean that all of a sudden the outcome could be different,' he said. ”You’ve still got to go play them. Hopefully, our young guys have all grown up and the older guys are getting a little better too."

NOTES: Watt, who did not practice last week, was limited on Wednesday, a possible step in the right direction. ... Joe Haden (foot), RG Trai Turner (knee), G/C J.C. Hassenauer (pectoral) and Ebron (knee) did not practice.