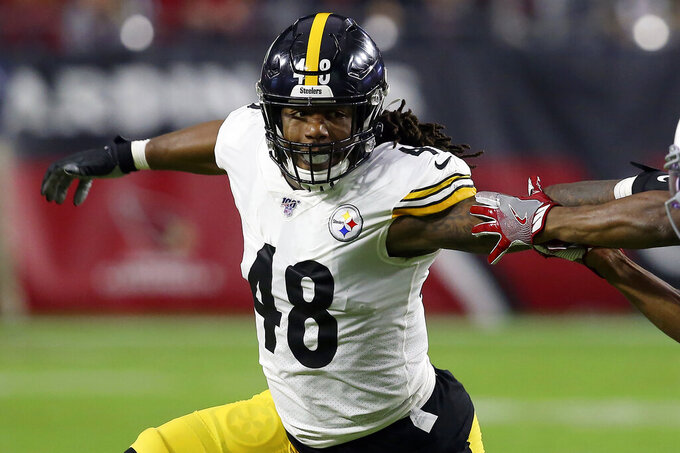 FILE - In this Dec. 8, 2019, file photo, Pittsburgh Steelers outside linebacker Bud Dupree (48) runs a play against the Arizona Cardinals prior to an NFL football game in Glendale, Ariz. The Pittsburgh Steelers are holding onto outside linebacker Bud Dupree. The team placed the franchise tag on Dupree Monday, March 16, 2020, just hours before the NFL-mandated deadline for teams to use the designation.(AP Photo/Ross D. Franklin, File)

PITTSBURGH (AP) — The Pittsburgh Steelers are holding onto outside linebacker Bud Dupree. Ramon Foster is walking away.

The team placed the franchise tag on Dupree on Monday, hours before the NFL-mandated deadline for teams to use the designation. Hours later, Foster announced his retirement following an 11-year career that saw him rise from an undrafted rookie free agent to a mainstay at left guard for a line that became one of the NFL's best.

Coach Mike Tomlin called retaining Dupree “a priority” heading into the offseason after the 2015 first-round pick flourished while playing across from All-Pro T.J. Watt. Dupree made 16 tackles for a loss in 2019, the fourth most in the NFL. He also added four forced fumbles and two fumble recoveries.

Dupree played so well he forced the Steelers' hand. The club opted not to approach him on a contract extension last summer, turning 2019 into basically a “prove it” season. Dupree said he understood the team's decision and stressed he didn't take it personally, adding that in the end he was fine betting on himself.

It paid off handsomely, though it leaves the Steelers with some work to do to get in compliance with the salary cap. Pittsburgh was already over the $198.2 cap for 2020 before tagging Dupree. The Steelers began the process of trimming the roster on Monday, cutting linebackers Mark Barron and Anthony Chickillo and wide receiver Johnny Holton.

Pittsburgh signed Barron to a two-year, $12-million contract last spring. The 30-year-old spent just one season with the Steelers, primarily as a backup, and finished with 58 tackles and three sacks. Chickillo spent five years as a reserve and played sparingly down the stretch in 2019, seeing action on just 13% of Pittsburgh's defensive snaps. Chickillo also spent a game on the exempt list last season following an incident with his girlfriend that resulted in charges that were later withdrawn. Cutting Chickillo frees up about $5 million in cap space.

Holton made the Steelers as a special teams ace last year but was thrust into a more regular role after injuries to players higher on the depth chart. He finished with three receptions.

Foster's retirement comes at a time when his future was murky at best. He turned 34 in January and the Steelers have younger, cheaper depth along the line. He seemed to understand as 2019 came to a close that the end was near, though he said he has no regrets about his decision to move on.

“When the time comes, you just know and now is a time for me to take a bow,” Foster posted on Instagram. “I’ve had a long, fun and life changing career. Who would have ever thought an undrafted kid out of the University of Tennessee would make it in the NFL for 11 years.”

General manager Kevin Colbert said he doesn't anticipate the Steelers running into contract concerns with Dupree the way they did with the last player they used the franchise tag on, running back Le'Veon Bell. Bell played under the tag in 2017. When the Steelers used it on him again in 2018, he opted not to sign it and sat out the entire season.

That doesn't figure to happen with the durable and popular Dupree, who has missed just one game over the last three seasons.