Struggling Panthers limp into bye week having lost 7 of 9 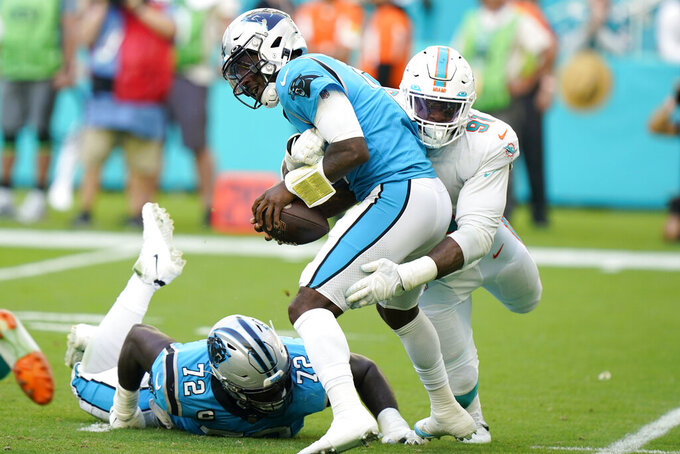 CHARLOTTE, N.C. (AP) — Hall of Fame executive Bill Polian used to recite an old adage: you never want to get too high in the NFL because you’re only two weeks away from disaster.

One of Polian’s former teams, the Carolina Panthers, is learning that firsthand.

Two weeks after going to Arizona and pounding the one-loss, injury-riddled Cardinals behind the return of Cam Newton, the Panthers now find themselves on a two-game skid — and have lost seven of their past nine games overall — entering the bye week and without star running back Christian McCaffrey and No. 1 cornerback Donte Jackson for the remainder of the season because of injuries.

The Panthers (5-7) are still mathematically alive in the NFC playoff race, but are a team that is trending in entirely the wrong direction.

“I think this is a week of true quality control and reflection,” second-year head coach Matt Rhule said of the bye week. “I asked the players to do the same thing while they’re away.”

Many Carolina fans celebrated Newton's return last month, hoping he could resurrect a team that had suffered through nine games of the Sam Darnold experience. But that simply hasn't happened.

Newton is 0-2 since taking over as the team's starter.

The 2015 league MVP has lost 10 consecutive games as Carolina's starting QB going back to 2018.

When Newton signed with Carolina, he said his only focus was on winning games. He said he didn't misjudge where the Panthers were in terms of competitiveness.

“Absolutely not. This is the NFL. Nothing’s promised,” Newton said. “Just because Cam Newton is on your roster it doesn’t mean you’re just going to win. Just because it’s a feel-good story, doesn’t mean you’re going to win. I’m well aware of that. I think in this situation we all have to come to grips with who we are, and I’m putting blame on myself first before I can even look at somebody else. I have to be better. I know that.”

The offensive line also has to get better, although there are no quick fixes out there.

Like Darnold and Teddy Bridgewater before him, Newton is finding that life as a Carolina quarterback can be a frustrating experience. He's spent the vast majority of the past eight quarters under heavy pressure.

But Rhule said Newton needs to be better, too.

“What we need is the quarterback to make plays and play us through it," Rhule said. “The quarterback is only as good as the people around him, but he does have to make those people better.”

The Panthers lost 33-10 at Miami last week in a game they simply had to win.

Newton finished 5 of 21 for 92 yards with two interceptions, recording a career-low 5.8 QB rating. The defense struggled for the second straight week and a blocked punt resulted in an early Dolphins touchdown.

Rhule said after the loss the Panthers aren't making any “global statements” and hasn't indicated any lineup or coaching changes are forthcoming.

“We went out to Miami, and we got beat up. We got beat," Rhule said. "So we regroup this week, we come back next week and play Atlanta at home, and we’ll focus on that week and make sure the O-line plays better, and the quarterback has a good plan; make sure there’s people open for them to throw to. That’s a big piece of this as well, and try to have the best plan possible.”

Things aren't going to get any easier for Carolina.

“We just have to go back, lick our wounds, be prepared to mend and heal this week get on the same page moving forward,” Newton said.