Stung Steelers seek to rebound in preparing to face Bills 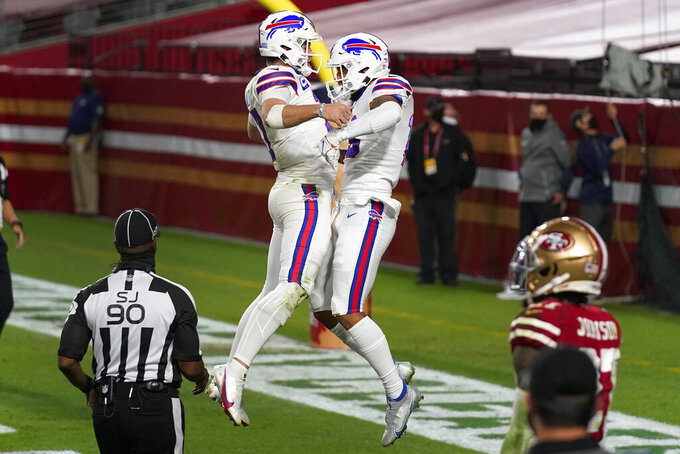 “I just think he’s got a real good personality and a good way with words,” McDermott said, referring to the Steelers coach, whom he’s known since the two were teammates at William & Mary. “He always has a way of putting a buzz on the verbiage he uses.

"I’ve always had a lot of respect for him that way.”

In noting the influence Tomlin, a team captain, had on him as a walk-on safety in 1993, McDermott reflected back with Buffalo (9-3) preparing to host Pittsburgh (11-1) in a showdown of AFC division leaders on Sunday night.

At the very least, McDermott said, Tomlin had a way of getting his message across.

No different than this week, perhaps.

Tomlin minced no words in assessing the Steelers’ deficiencies following their first loss of the season. Pittsburgh turned the ball over twice on downs and another on an interception in squandering a 14-0 lead in a 23-17 loss to Washington on Monday.

Tomlin called Pittsburgh’s inability to score on five attempts from Washington’s 1 as “catastrophic.”

He called out his receivers for dropping too many passes by saying: “They can catch the ball or they can get replaced by those who will catch it.”

And he questioned his usually stout defense for being the “less dominants” in the second half, when Washington scored on four of six possessions, including the last three.

Tomlin wouldn’t apologize if he came off as being blunt.

“I just try to tell the truth and identify problems,” he said. “We’ve got to get to work with fixing them. If you perceive it as blunt, then that’s the reason why.”

Expectations are high in Pittsburgh for a team in position to clinch its first AFC North title and playoff berth in three years.

It’s no different in Buffalo, where the Bills are seeking to claim their first AFC East title since 1995.

While the Steelers are accustomed to success, having won two Super Bowls and never finishing below .500 in Tomlin’s 14 seasons, the Bills are relative newcomers to late-season playoff races before McDermott’s arrival in 2017.

McDermott, along with GM Brandon Beane, have transformed a franchise that was in the midst of a 17-year playoff drought — which at the time stood as the longest active streak in North America’s four major pro sports. The Bills are now poised to clinch their third playoff berth in four years.

Safety Micah Hyde noted how the team’s confidence has grown, with players now openly discussing Super Bowl aspirations for a team that’s not won a playoff game since the 1995 postseason.

“We talk about winning the Super Bowl and we mean it,” Hyde said. “Yeah, I think we’re ready to take the next step.”

For now, he’ll settle on beating the Steelers.

The game comes a little under a year after Buffalo improved to 9-3 and clinched a playoff berth with a 17-10 “Sunday Night Football” win at Pittsburgh on Dec. 15, 2019. The Bills forced five turnovers, including four interceptions thrown by Devlin “Duck” Hodges, who started in place of Ben Roethlisberger.

Big Ben is looking forward to playing this time.

“We are going to their place, looks like crappy weather, night game, cold,” he said. “All the perfect elements that come to playing playoff caliber football teams and playoff caliber situations this time of the year."

The Bills prepared for the game at Pittsburgh by borrowing a song from the Steelers playlist. The Steelers traditionally play Styx’s “Renegade” before the start of the fourth quarter for motivation. McDermott had the song play constantly during the week of practice, which led to his players dancing on the sideline as it boomed over the Heinz Field PA system.

Asked if “Renegade” is on his playlist this week, McDermott laughed and said: “Good try.”

Tomlin’s message regarding the Steelers league-high 34 drops was received loud and clear by JuJu Smith-Schuster.

“It’s motivation,” Smith-Schuster said. “If you can’t do your job, we’ll get someone to do it. That’s something he’s always said. ... He’s proven that. He’s fired people and brought someone else in.”

The depth of the NFL’s third-ranked defense will be tested against one of the league’s most dynamic offenses. The Steelers will likely be without injured inside linebacker Robert Spillane (left knee) and possibly veteran cornerback Joe Haden, who suffered a concussion against Washington.

Avery Williamson, acquired in a trade with the Jets on Nov. 2, will start in place of Spillane, with Cam Sutton in line to replace Haden.

Quarterback Josh Allen became Buffalo’s first player to earn his third AFC player of the week honor after going 32 of 40 for 375 yards with four touchdowns and no interceptions in a 34-24 win over San Francisco on Monday night. It was the third-year starter's sixth 300-yard outing, one short of matching the team's single-season record. His 3,403 yards passing already rank eighth on the team list.