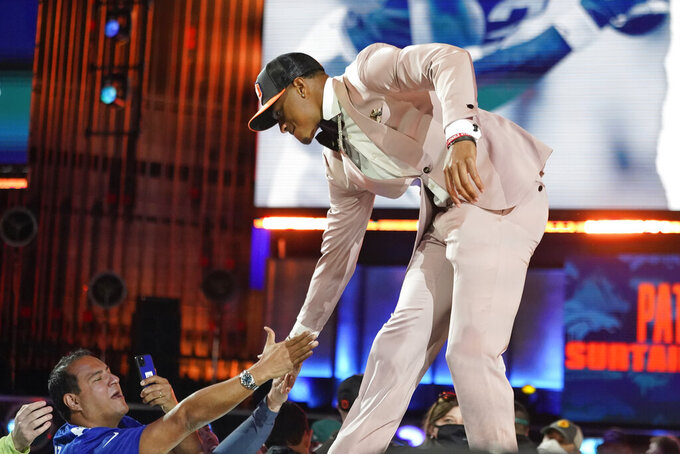 Alabama cornerback Patrick Surtain II greets fans after he was chosen by the Denver Broncos with the ninth pick during the first round of the NFL football draft Thursday, April 29, 2021, in Cleveland. (AP Photo/Tony Dejak) 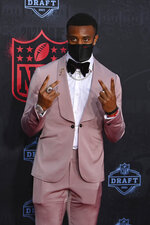 His father and namesake was a Pro Bowl cornerback who played 11 seasons with Miami and Kansas City before coaching his son at American Heritage High School in Florida.

“I learned a lot from him,” the younger Surtain said Thursday night after the Denver Broncos made him a surprise selection with the ninth overall pick in the NFL draft.

“Gaining his insight and perspective on things has helped me a lot on the field," Surtain said. "His game translates a lot into my game. Learning from him and having him teach me his techniques helped shape me up for the next level.”

Asked about people saying he's already better than his dad, Surtain said, "I don’t try to be too cocky because he did his thing, and I still have to reach him. I’ve got to reach that steppingstone. This is just the start for me.”

The younger Surtain, who starred at Alabama, has already bested his father, who played at Southern Miss, in one big category: his dad was selected 44th overall in the second round by the Dolphins in 1998.

The Broncos were widely expected to pick a quarterback in the first round for just the fifth time in history, but they were able to grab the best defender on the board instead because of general manager George Paton's trade for veteran QB Teddy Bridgewater 24 hours earlier.

After sending a 2021 sixth-round pick to Carolina for Bridgewater, who will compete with incumbent Drew Lock for the starting job, Paton bypassed quarterbacks Justin Fields and Mac Jones in Round 1.

“We're happy with the two quarterbacks we have here,” Paton said. “Drew's been working hard every day and Teddy's going to bring some experience to the room, some leadership. So, we're really excited for both quarterbacks.

“We're always looking at every position and quarterback's another one, but we like the two we have."

Paton, the former assistant GM in Minnesota, is familiar with Bridgewater, whom the Vikings selected with the 32nd overall pick in the 2014 draft.

The Panthers, who are paying $7 million of the $10 million Bridgewater is due in 2021, are restructuring his deal to facilitate the trade that is expected to be finalized by Saturday.

He signed cornerbacks Kyle Fuller and Ronald Darby in free agency to go with Bryce Callahan and Michael Ojemudia and he re-signed safeties Kareem Jackson and Justin Simmons.

“I will benefit a lot learning from those guys," said Surtain, who is the second consecutive Alabama alum selected by Denver in the first round, following wide receiver Jerry Jeudy at No. 15 last year.

Broncos fans may not like Denver bypassing a QB, especially after speculation they were in the middle of the Aaron Rodgers sweepstakes given the reigning MVP's unhappiness with the Packers.

Paton declined to say whether he had discussions with Green Bay about Rodgers: “You know, we're just going to focus on the draft right now and focus on Patrick Surtain and what a great player he is and we're excited to have him here.”

Paton said three or four teams wanted to trade up to No. 9 but “it would have taken a haul to pass up Patrick Surtain.”

The Broncos have foundered under center ever since Peyton Manning retired a month after winning Super Bowl 50, churning through more quarterbacks than any team in the league over the last five years.

Instead of getting a QB to catch up with the likes of the AFC West's quarterbacks, they got a cornerback who can help contain those prolific passers.

“I'm trying to be known as one of the best in the game," said Surtain, who will get the chance to do just that by facing Patrick Mahomes, Justin Herbert and Derek Carr twice a year.

The Broncos own the 40th overall pick in Round 2 and 71st overall selection in Round 3.