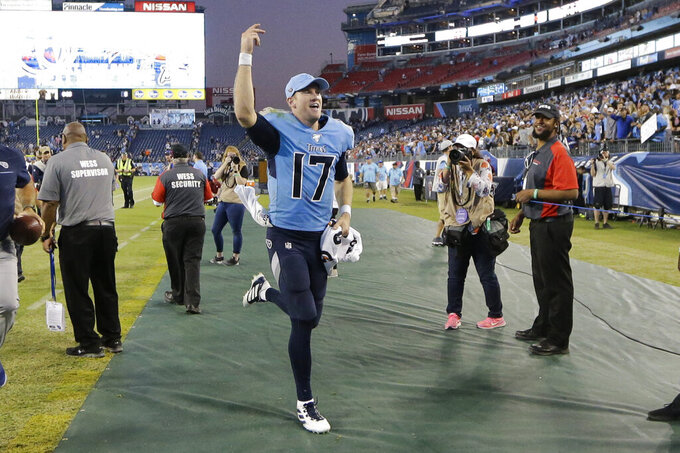 NASHVILLE, Tenn. (AP) — The Tennessee Titans' switch at quarterback from Marcus Mariota to Ryan Tannehill has done more than just spark the offense.

Now they have confidence and hope.

Tannehill led the Titans to their best offensive performance this season with 403 yards total offense. He had a season's best 329 yards passing in his first start since Mariota was benched, sending Tennessee to a 23-20 win over the Chargers. An offense that had just one touchdown in the previous 10 quarters scored two TDs in the final 13:11 to end a two-game skid.

"Turn the whole season around, I believe so," wide receiver Corey Davis said. "We've got the momentum. Offense, we've got the talent. We have just got to put it all together and stay consistent."

That will be the challenge for the Titans (3-4) whose last winning streak was last December.

The defense. The Titans have not allowed an opponent to score more than 20 points all season, a seven-game stretch that matches the 2000 squad's start. Tennessee is one of only three NFL teams to do that each game this season with the Patriots (six games) and San Francisco (six).

They also came up with big stops inside the final minute to preserve the win, the last when linebacker Wesley Woodyard knocked the ball out of Melvin Gordon's hands with defensive tackle Jurrell Casey recovering. The Titans weren't happy with themselves giving up 20 points for only the second time this season, though they held the Chargers to 39 yards rushing.

"But it came down to that last play, and we got it done," Casey said.

Kicker. Cody Parkey hit a 45-yard field goal and two extra points, but the Titans' replacement to the replacement kicker also hit the right upright after Tannehill hit Tajae Sharpe with a 5-yard TD pass in the fourth quarter. That left Tennessee's lead at just 16-0, and the Chargers needed only a field goal to force overtime.

Vrabel says Ryan Succop, who remains on injured reserve recovering from offseason knee surgery, went through his pregame kicking routine. The Titans planned to evaluate where the veteran is, though Succop has to sit out at least one more game before being eligible to return.

Jeffery Simmons. The No. 19 overall pick in April was expected to be a selection for the future after tearing his left ACL in February. Instead, the 6-foot-4, 305-pound defensive tackle debuted against the Chargers. He had the Titans' lone sack, two tackles for loss and finished with four tackles all on 21 snaps.

Vrabel. Yes, the Titans won a crucial game after switching quarterbacks. But the second-year coach is being second-guessed again for not challenging the spot of the ball after Tannehill's sneak on fourth-and-inches. Fans wanted the challenge flag and a chance to run more clock with 2:35 left.

The coach said Monday he talks repeatedly with NFL officiating chief Al Riveron and knows the ball has to be seen clearly to have a chance to win a challenge.

The list is growing enough that Vrabel said Monday the team's injury report will have a staple in it. Cornerback Adoree' Jackson left in the third quarter with an injured foot. Right tackle Jack Conklin hurt his right thigh early and played only eight snaps. Rookie Nate Davis hurt a rib in the first half and didn't finish the game.

2 — The Titans had allowed an NFL-worst 29 sacks through six games. Joey Bosa had two sacks for the Chargers, but that was all against an offensive line that played most of the game with backups Dennis Kelly at right tackle and Jamil Douglas at right guard because of injuries.

A chance to climb back to .500 when Tampa Bay (2-4) visits on Sunday. Then the schedule stiffens with a trip to Carolina, though the Titans might not see Patrick Mahomes when Kansas City visits Nov. 10 before their bye. But adding Simmons to an already good defense with an offense suddenly capable of scoring again makes the near future brighter.