Texans start strong but must improve before trip to Browns 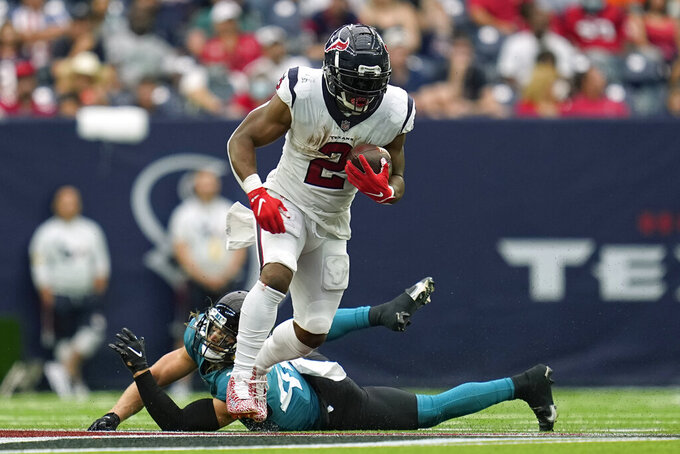 Houston Texans running back Mark Ingram II (2) rushes for a first down as Jacksonville Jaguars safety Andrew Wingard defends during the second half of an NFL football game Sunday, Sept. 12, 2021, in Houston. (AP Photo/Sam Craft)

HOUSTON (AP) — Quarterback Tyrod Taylor’s solid debut for Houston helped the Texans overcome the absence of Deshaun Watson and start the season with a victory over the Jaguars.

Now the Texans will look to improve before a much bigger test this week when they travel to play the Cleveland Browns.

Taylor is getting another chance to start this year after he started only one game for the Chargers last season before being sidelined when a team doctor accidentally punctured his lung when giving a painkilling injection for a rib injury. By the time he recovered he had lost his starting job to Justin Herbert.

This year, with Watson on the team but not playing after 22 women filed lawsuits alleging sexual assault or harassment, and after he requested a trade, Taylor has stepped in to steady the Texans as they try to bounce back from a 4-12 season.

Taylor threw two touchdown passes and didn’t have a turnover to help coach David Culley get a win in his head coaching debut.

“It wasn’t a perfect game by any means, but the effort, the focus and the execution was there in all three phases,” Taylor said. “It’s something to build off of and we’ll continue to keep working to get better.”

The Texans had 160 yards rushing in the opener, which ranked fourth in the NFL in Week 1 entering Monday night's game. It’s a huge improvement from last season when Houston was 31st in the league averaging 91.6 yards rushing a game. The Texans added Mark Ingram and Phillip Lindsay this offseason and both players had touchdowns Sunday to help in the win.

Ingram started and led the team with 85 yards rushing and Lindsay added 25 yards on the ground.

“We had a lot of good runs and then there’s some runs that weren’t as clean, and I think we can improve and learn from it and grow from it,” Ingram said.

The Texans took advantage of rookie mistakes by quarterback Trevor Lawrence to get some takeaways Sunday, but the No. 1 overall draft pick still managed to throw for 332 yards. Houston traded top cornerback Bradley Roby to the Saints last week and will need some of its young players to step up moving forward to shore up the secondary heading to meeting with Baker Mayfield and his strong receiving corps this week.

WR Danny Amendola had five receptions for 34 yards and a touchdown Sunday. The 35-year-old, who won two Super Bowls with New England, signed with the Texans on Wednesday, giving him a job for the first time since his contract with the Lions ended after last season.

Running back David Johnson, the team’s starter in 2020, had just three carries Sunday as the Texans relied on Ingram to power the running game.

Defensive tackle Vincent Taylor has an ankle injury and Culley said he was visiting a doctor Monday and they'd know more about the severity of the injury later this week. WR Anthony Miller was inactive Sunday after injuring his shoulder in the first preseason game. But Culley said Monday he expects him to play this week.

3 — The Texans lead the NFL after grabbing three interceptions Sunday. They had the same number of interceptions all last season.

After a successful debut, Culley believes sticking with their most important principles will lead to continued success for the Texans.

“We’ve always preached about getting turnovers. We got three,” he said. “On offense, we all know the big thing is us taking care of the ball. We took care of the ball. Basically, that’s our formula. As long as we’re attacking that formula, things are going to be all right.”