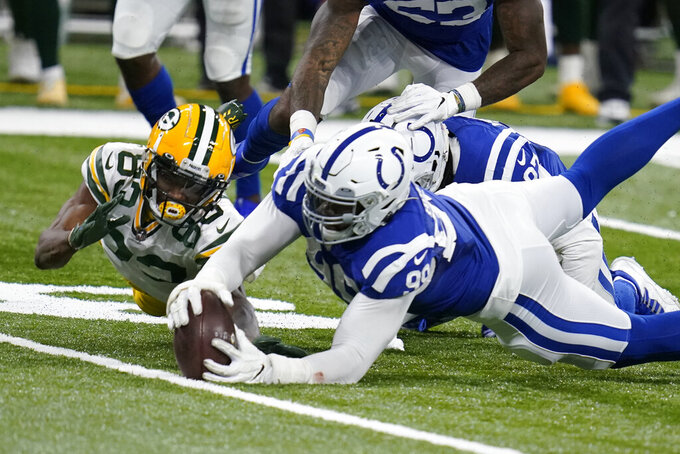 Facing the league's leading runner with a short-handed defensive line only makes the challenge more daunting.

With Pro Bowl defensive tackle DeForest Buckner out after being placed on the reserve/COVID-19 list earlier this week, starting defensive end Denico Autry still inactive after going on the COVID list last week and now starting linebacker Bobby Okereke ruled out with an ankle injury, coach Frank Reich isn't changing his tune. He's bringing back an old refrain for Sunday's game against Tennessee.

Especially with so much at stake.

Both teams are 7-3 and share the AFC South lead. Indy won this season's first contest, Nov. 12 on the Titans home turf, and a season sweep would give the Colts a one-game lead plus a tiebreaking season-sweep.

A victory by Tennessee would give the Titans a one-game lead with five to play, a split in the series and the current tiebreaking edge because of a better division record.

But without Buckner, Autry and Okereke, the league's second-stingiest defense won't look the same — on paper — and some believe it could give the run-heavy Titans a significant advantage up front.

“I think they play very hard," the NFL's reigning rushing champ said. “They fly to the ball. (They are) guys that play great together collectively, good tacklers,"

Reich believes those traits will continue to be on display despite being without their best run stuffer, leader in sacks and fourth-leading tackler.

Instead, the Colts defense believes only the name will change.

“There’s no question," Pro Bowl linebacker Darius Leonard said when asked if the Colts would miss Buckner. “It is what it is. The other guys have to do the preparation because it’s not one guy, it’s 11 guys."

Last week, Henry became this season's first 1,000-yard rusher and he comes into Sunday with a league-high 1,079 yards through 10 games.

He's also on quite a streak.

Henry has hit the 100-yard mark six times this season, including each of the past two weeks and has run for 100 or more yards in seven consecutive road games. Henry had 103 yards in the first meeting with Indy, and last season he rushed for 149 yards in a rare Titans victory at Lucas Oil Stadium. And he doesn't expect the workload to decrease this weekend.

“We have that mindset that it’s playoff football right now and just be locked in every week,” he said.

It appears Rivers will make his 235th consecutive start this weekend.

“I thought Philip looked good and had a good day out there," Reich said.

Rivers has not missed a start since 2006 when he became the starter for the Chargers, and Sunday's start would break a tie with Eli Manning for the 10th-most starts in league history. He would also tie Charles Woodson for ninth on that list.

He went on injured reserve after hurting his wrist in a loss at Cincinnati on Nov. 1 and sat out the last matchup with Indy.

Things didn't go well. Kern's replacement, Trevor Daniel, struggled in the second half — shanking one third-quarter punt for 17 yards and having another blocked and returned for a touchdown just a few minutes later.

Four-time Pro Bowl kicker Stephen Gostkowski also missed a 44-yard field goal wide right in that game, his fifth miss of the season on seven tries from 40-49 yards. Gostkowski made all three of his field goals in the Titans’ win over Baltimore, including a pair of 40-yarders.

The special teams’ struggles were a major reason Tennessee lost 34-17.

Rookie Jonathan Taylor and veteran Nyheim Hines have taken turns sharing the load out of the Colts' backfield.

Hines has 51 carries for 179 yards and two scores, 36 receptions for 296 yards and four TDs, and is one of nine players who has three or more multiple-touchdown games this season. He had one on the ground and another through the air in the last meeting with Tennessee.