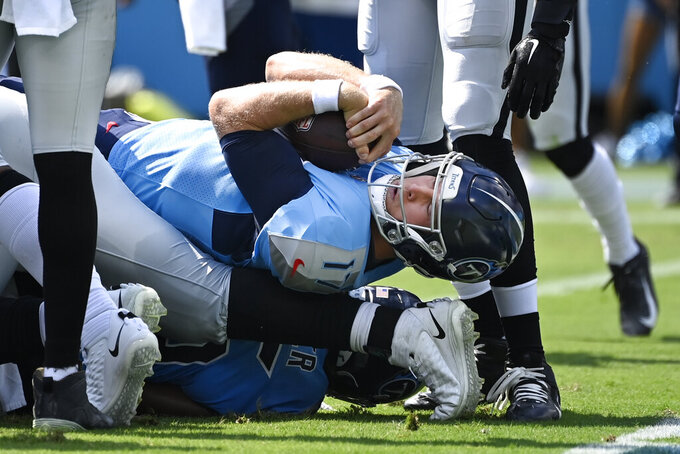 Tennessee Titans quarterback Ryan Tannehill (17) scores a touchdown on a 1-yard run against the Las Vegas Raiders in the first half of an NFL football game Sunday, Sept. 25, 2022, in Nashville, Tenn. (AP Photo/Mark Zaleski)

NASHVILLE, Tenn. (AP) — Scoring touchdowns early in games has not been an issue for the Tennessee Titans so far this season.

The third and fourth quarters have been a big problem with the Titans outscored 57-7 combined after halftime over the first three games.

They can't afford that Sunday when they visit AFC South rival Indianapolis (1-1-1), not with the history between these franchises.

Quarterback Ryan Tannehill said Wednesday that the Titans have to come out and execute better in the second half.

“It wasn’t a drop-off in focus or urgency it didn’t feel like,” Tannehill said. “We just missed some opportunities on making some plays. We just have to clean those little things up to be able to come out and carry that momentum through halftime, into the second half.”

Against the Las Vegas Raiders, they led 24-10 by halftime. Then the defense saved the 24-22 win by holding the Raiders to a pair of field goals, getting an interception and breaking up a pass for a 2-point conversion. The Titans offense had an interception, turned it over on downs and punted twice in the second half.

It was a drastic change from the first half when the Titans opened the game with their best offensive stretch this season. They went at least 75 yards on each of their first three possessions for touchdowns for only the third time since 2000 and first since beating Detroit on Dec. 20, 2020.

Wide receiver Nick Westbrook-Ikhine said the offense was rolling well in the first half last week no matter if the Titans were facing third-and-long or picking up easy first downs. Everyone was clicking.

“Obviously, second half we need to score more points and just watching the film and recognizing that it was small details and little mistakes, that kind of led that to happen,” Westbrook-Ikhine said.

Derrick Henry, the two-time NFL rushing champ, still is looking for his first 100-yard rushing game this season. He might've had that already if not for penalties wiping out some plays. Teams also have made some adjustments.

Tannehill was intercepted three plays into the Titans' first offensive possession in the third quarter against Las Vegas.

Titans coach Mike Vrabel said some of the plays and runs they had in the first half weren't there at least this past game, though they had opportunities to make plays.

One bad play came on third-and-1 a couple of minutes into the fourth quarter. Henry was swarmed for a 3-yard loss, forcing another punt.

Points will matter Sunday. Last year's game in Indianapolis went to overtime with Tennessee winning 34-31 on a field goal set up by an interception by two-time All-Pro safety Kevin Byard.

“We’ll have to make sure that whatever we’re doing early on, if it’s positive, we’ll have to continue it,” Vrabel said.

“Then if not, we’ll have to make sure that we’re battling to get back in the game like we did last year. If we do get up, it’s going to be a struggle to be able to close anybody out.”